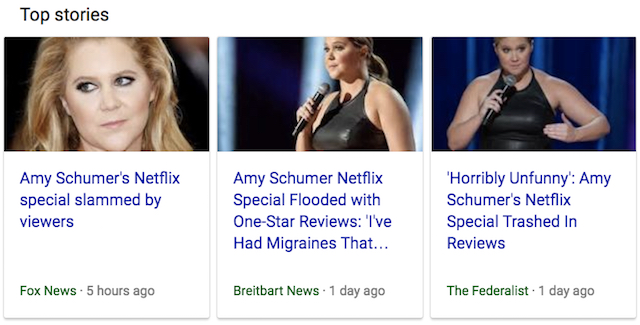 This morning a friend wrote in Slack, “Looks like everyone hates Amy Schumer’s special.” Curious, I did a search, wondering if critics had come out with savage reviews a la Iron Fist. But the top three news stories reporting Schumer’s comedic misstep were from Breitbart, The Federalist, and Fox News. What was really going on here?

Comedy site Splitsider had the same alarm-bells reaction and had already done some digging. While several entertainment sites have dutifully reported that Netflix users seem to hate Schumer’s latest effort, Splitsider wasn’t so sure the sentiment was genuine. They searched those corners of Reddit where trolls make camp and uncovered what is surely an organized campaign to tank Schumer’s Netflix rating.

It’s not surprising that the holy trinity of conservative-leaning “news” sites (Breitbart, Federalist, Fox) were quick to capitalize on the trollish efforts and tout the reviews as Schumer-bashing “news” without looking further. Luckily Splitsider’s Megh Wright was on the case.

A quick Reddit search—particularly in the alt-right r/The_Donald subreddit—tells a very different story than what the above outlets are reporting, with posts like this one and this one encouraging people to give Schumer’s 2016 book a bad review on Amazon, plus all of these calls to give her special a one-star review:

Schumer’s “The Leather Special” also has more than 900 reviews already (with hundreds of one-stars), which is … fast, and pointedly critical. And if you have the misfortune of studying any of the comments in the Reddit threads linked above, it’s clear that this set of Redditors despises Schumer and delights in causing what damage they can to her career.

Why? Schumer is a famous, outspoken woman who has not shied from controversial humor, and I’ve read some concern-trolling that she goes too far. Former alt-right golden boy Milo Yiannopoulos called Schumer a “harpy” and suggested that she be deported to Cuba, so there’s that.

I have no idea if “The Leather Special” is worth your time or not—but I dislike attempts to pile on and knock it down because some Internet denizens have nothing better to do. It’s really about ethics in rating comedy specials.

UPDATE: Schumer has posted a statement regarding the troll issue on Instagram.

(via Splitsider, images via screengrab, Shutterstock)