Review: Along Came the Devil’s Talented Female Cast Can’t Save a Piecemeal Script 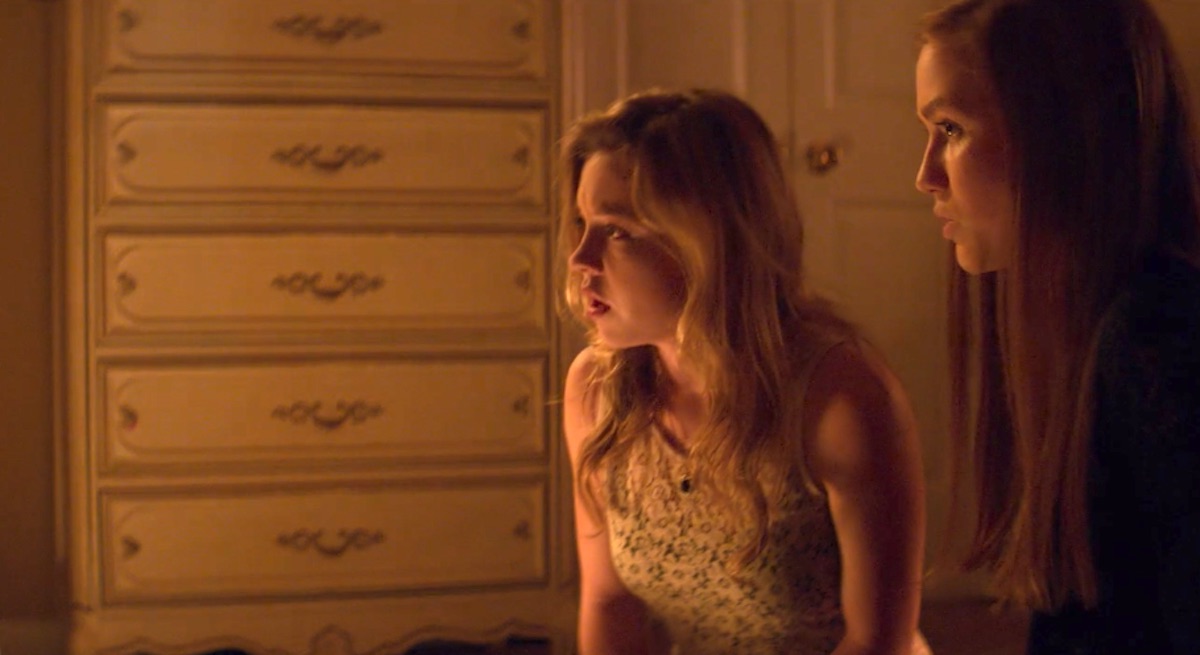 I have watched my fair share of low-budget films, but none herald quite the same unique experience as the “all in the family model.” When the same two or three names reappear across the credits for writing, directing, producing, and acting, it’s usually a sign that the ensuing passion project will be very sincere and at least a little bit baffling.

Such is the case with Along Came the Devil, the first film released by husband-and-wife production team The DeVan Clan. The film boasts a cast of talented and seasoned actors, but the lion’s share of creative positions fall in part or in whole to Jason and Heather DeVan. The results, while sometimes intriguing, fall somewhat short of the mark.

The plot of the film, as explained by a hasty-feeling intro card, is as follows: Sisters Jordan and Ashley grew up with an abusive father and deceased mother, with older Jordan trying to paint a rosy and apparently not-quite-accurate picture of their mother in order to comfort Ashley. Ten years later, Jordan goes off to college and Ashley is taken in by her aunt Tanya, but despite the new beginning, Ashley is stalked by the same darkness that haunted her mother.

At its heart, the film is an Exorcist riff, from the older/younger priest dynamic (or pastors, since this is a very evangelically-centered film) and the appearance of green goop, to the focus on discovering the demon’s name. This is far from the worst sin, as horror is a genre that thrives on reused tropes and films talking back to one another. The filmmakers certainly seemed passionate about the central exorcism scene; it contains all of the film’s fanciest and priciest effects and its most all-out performances, as if one is stepping into a separate short film with another 70 minutes scaffolded around it, and for those ten-or-so minutes, the film gets its hooks in, selling on earnestness if not originality.

Unfortunately, there is the matter of those other 70-or-so minutes. The title card that opens the film, reading more like a back-cover pitch than a proper prologue, seems to have been tacked on late in production to make sure audiences knew what was going on. I grew more and more sure of this conviction over the course of the film, as a set of sometimes jumbled and other times puzzlingly elided scenes lurched along without a sure thread of connectivity.

Ashley’s sister Jordan, mentioned prominently in that title card, doesn’t appear in the film except in flashback, and her linchpin status as the thing protecting Ashley is never explained. A scene of Ashley having a breakdown in class early on is referenced, but not seen. The young pastor is downright creepily intent on Ashley, but no implication comes through in the possession scenes. Aunt Tanya is staunchly religious for most of the film, but later inexplicably refuses to trust the priests because the film wants that Exorcist bedroom scene, and the overall tone has a difficult time conveying whether it wants to be a film about characters with Christian beliefs or a full-on Christian film.

While the character writing suffers from omissions that leave gaps in the story, the sound design wants to be extremely sure that you don’t miss anything. Moments of relative subtlety, like a shadow in the background of the shot, are underscored with clanging jump-scare emphasis to a numbing degree. This does a disservice to the quieter and unsettling moments, instead giving the audience time to dwell on the unfortunately cheesy hooves-and-horn CG devil. The film seems afraid to let quieter choices stand for themselves, and smothers what might’ve worked.

It’s not all bad. The cast, as mentioned, is competent across the board. The secondary cast also boasts some very entertaining stand-outs, particularly Madison Lintz (The Walking Dead) as local goth kid Hannah and Bruce Davison (Longtime Companion, X-Men) as the embittered, hard-drinking older pastor. George Troester’s makeup effects are also effectively gunky and unsettling, even as the computer effects around them fail.

But where the film slips from clumsy into upsetting is in its decision to bring a discussion of mental illness into the plot. Perhaps also a symptom of that desire to follow in The Exorcist’s footsteps, Ashley is prescribed anti-depressants only for the film to assure us, implicitly and explicitly, that it’s Jesus she needs, rather than the help of a medical professional. (I will admit the weblink Tanya visits titled “Is it depression or demonic possession?” came all the way around and made me laugh.) It’s hard not to remember that this assumption exists in real life and that the consequence is too often the abuse of the mentally ill; in retrospect, the “based on true events” tag that opens the film becomes the most horrifying part about it.

Ultimately, the talented cast can’t save a script that’s working against them and a film that doesn’t so much end as abruptly stop. If you’re looking for indie ghost stories about teenage girls, Haunter is a better bet.

ALONG CAME THE DEVILmovie review