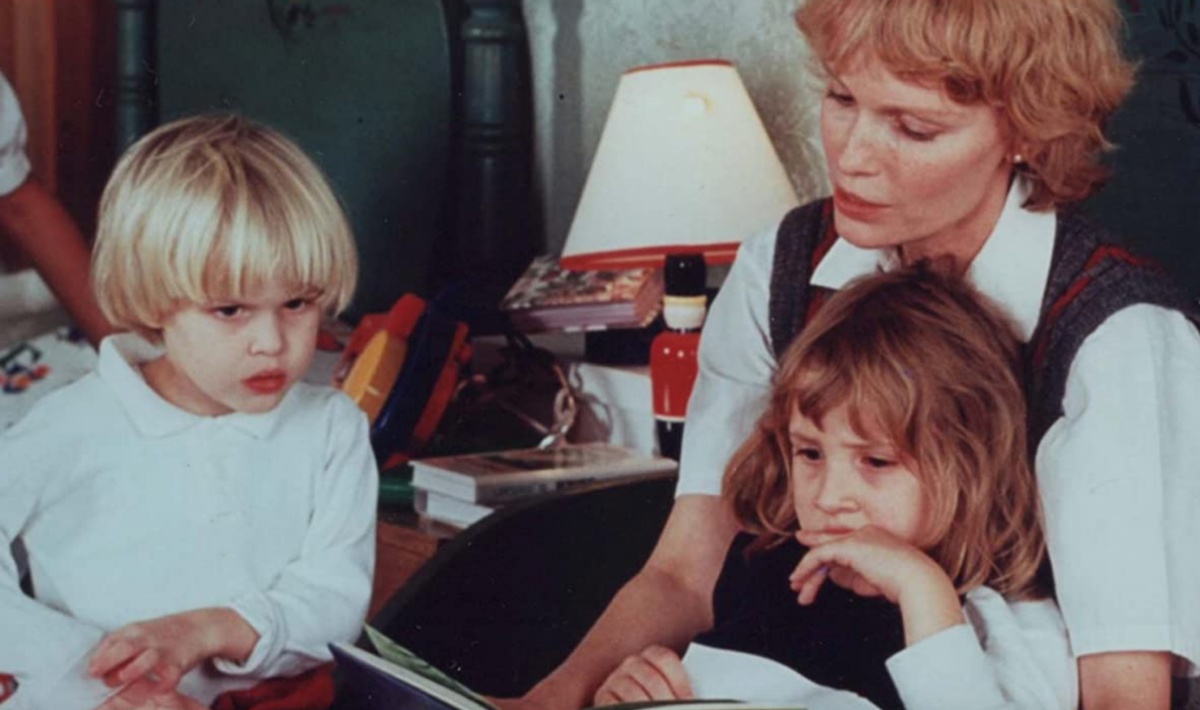 The series, which will be four episodes long, is told primarily through the perspective of the Previn-Farrow children, with audiobook excerpts of Woody Allen’s 2020 memoir, Apropos of Nothing Audiobook, peppered in to include his voice.

As someone who was not alive during the height of most of this conflict and was not fully aware of the allegations against the director until Dylan Farrow’s letter, it was an enlightening look at the relationship between Allen and Mia Farrow, the mother of Dylan, Satchel (Ronan), Soon-Yi, and many other children wrapped up in this tale.

One thing that jumped out to me is that Woody and Mia never officially lived together. They lived across Central Park, sending cute messages to each other via their apartment windows. Allen says she “wasn’t demanding” when listing all of her good qualities. At the time they met, Mia was divorced twice (Frank Sinatra and André Previn, respectively) and had 7 children before Allen.

She states in the documentary that Allen made it clear then that he wanted nothing to do with children. An interview with Allen shows him saying that he plays with the kids, but leaves before diapers get changed.

Despite that, he did bond with the children, as would be expected in a relationship over a decade long. We hear from Fletcher and Daisy Previn, Dylan’s siblings, about the relationship they had with Allen: building them bunk beds and fishing with them. Moses Farrow, who Mia Farrow adopted as a single mother, in particular had a close relationship with Allen, and just in looking at the footage of them together, you can see why Moses has remained so close to this father figure, even now.

Mia eventually wanted to have another baby, and both she and Allen, via audiobook, confirm that he wanted to still be a “free soul” and have as little involvement as he wanted. After years of not getting pregnant, Mia adopted Dylan, and rather than sticking to the free spirit idea, Allen ended up falling in love with his daughter and becoming devoted to her.

There are stories from Allen, Mia Farrow, Dylan, and others, about how Allen would spend so much time with her—how he fell in love and was “enchanted” by her, all things that sound sweet and natural, like the melting heart of a longtime child agnostic.

Changes seemed to occur when Satchel Ronan Farrow was born (fact: he was named after Negro League baseball pitcher). This was Allen and Mia’s biological child (yes, I know the Sinatra rumors), and he very much wanted a girl and was disappointed it would be a boy. Allen then, allegedly, began to start separating Dylan from the rest of the family.

Testimony of this calls Allen’s behavior “hovering” with “smothering energy,” and Dylan says she was always in his clutches and he was hunting her. Ronan Farrow recounts Dylan tensing up when Allen’s voice would enter the room and that she wouldn’t want to go with her father.

Dylan began withdrawing from it and wanting to hide from Allen, locking herself in bathrooms when Allen was around. She recounts Allen wrapping his body around her only in his underwear. Mia Farrow recounts seeing Allen with his head in Dylan’s lap, which she thought was inappropriate.

At five, Dylan started therapy for being “shy, withdrawn, and very fearful” and said that she had “a secret.”

The accounts get explicit, with Allen teaching Dylan on how to suck his thumb, which a family friend saw happen. It is hard to watch, especially because the gaslighting that Allen allegedly began pushing onto Mia about her being “crazy” and “needing help” for being concerned, which is especially harrowing considering the longtime narrative around Mia Farrow being “crazy.”

It wasn’t until a professional noted something being off about the way that Allen handled Dylan that he agreed to see a clinical psychologist about his behavior, which he called “inappropriately intense.” It was explained that he had never been around children and that it wasn’t sexual, but it could be perceived as sexual. Mia started to think that everything would be okay, especially when Allen decided he wanted to adopt Moses and Dylan, who didn’t have fathers on the record because they were solely adopted by Mia.

Then, Mia alleges that she found pornographic pictures of her daughter, Soon-Yi, in Allen’s apartment. That is when things changed again.

Soon-Yi Previn shared a statement about the documentary to Deadline:

These documentarians had no interest in the truth. Instead, they spent years surreptitiously collaborating with the Farrows and their enablers to put together a hatchet job riddled with falsehoods. Woody and Soon-Yi were approached less than two months ago and given only a matter of days ‘to respond.’ Of course, they declined to do so.

As has been known for decades, these allegations are categorically false. Multiple agencies investigated them at the time and found that, whatever Dylan Farrow may have been led to believe, absolutely no abuse had ever taken place. It is sadly unsurprising that the network to air this is HBO – which has a standing production deal and business relationship with Ronan Farrow. While this shoddy hit piece may gain attention, it does not change the facts.

Deadline does clarify that Ronan Farrow inked a three-year deal with HBO back in 2018 to make investigative documentary specials, but that Allen v. Farrow is not one of those Ronan Farrow productions. Still, the documentarians, Kirby Dick and Amy Ziering, made it clear that the reason they were not looking at Allen’s “side” is because his “side” has been the one at the forefront.

“Woody has put out this side, which we looked at carefully and interrogated and investigated and attempted to corroborate, and we are presenting a solid case of facts for the public to now look at that they were not ever presented before,” Ziering explained. “So that’s how I look at it. I don’t like to look at this or think of it as we’re taking sides or we’re explaining one side of it. We’re explaining what happened, and it’s right all there in front of you, and we’re showing you the witnesses and the corroboration.”

I am sure that there are many who will assume that this series can only be biased as a result, and it is biased, but I don’t think that is entirely a bad thing. Woody Allen has controlled the narrative until very recently, and even with his publication issues concerning his memoir, he remains afloat.

Do I think this docuseries will change the minds of any doubters? No. But I think it is important that Dylan be able to share her experience and have others close to her share in what happened, what they saw, and to at least have that shadow lifted.

As a legal note: Woody Allen denies ever having been sexually inappropriate or abusive with Dylan. Soon-Yi and Moses have both made abuse allegations against their mother, Mia Farrow.