We Need to Talk About Missouri Governor/Alleged Scumbag Eric Greitens 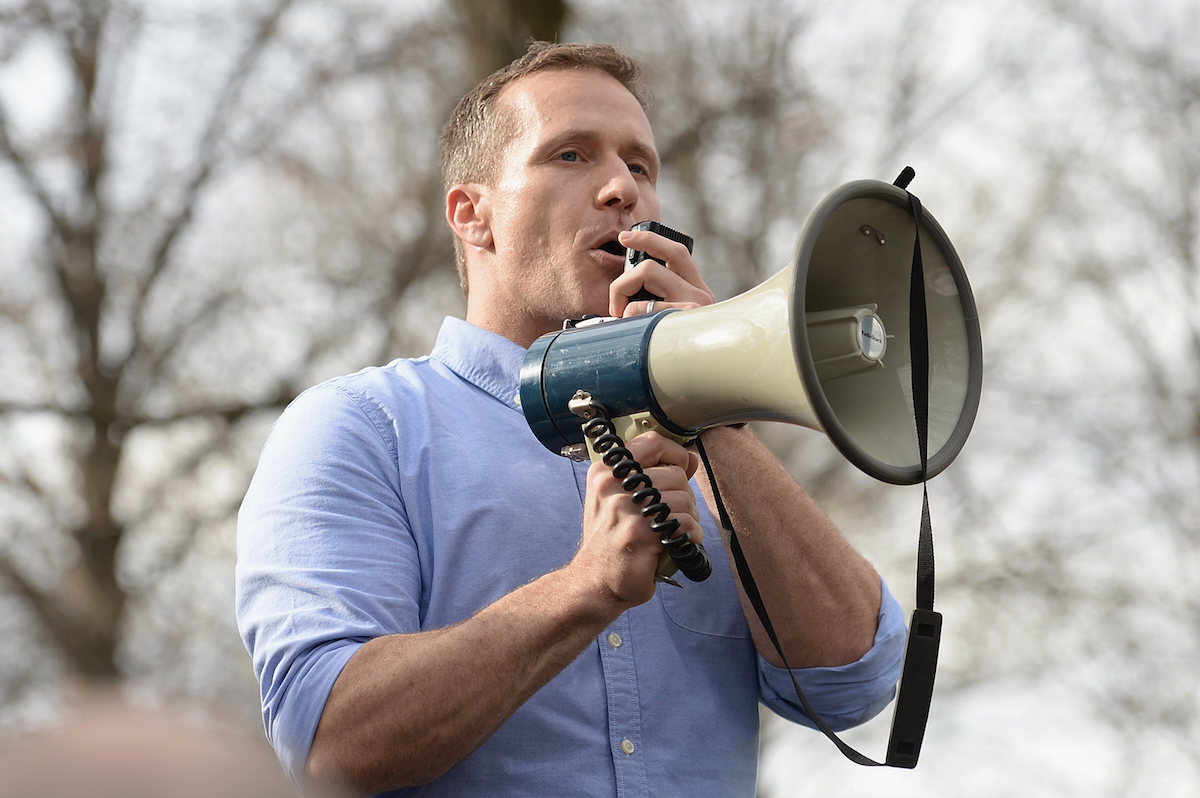 It’s still incredible to believe that we have a powerful political leader in office being accused of gross sexual assault, as well as shady and possibly illegal misuse of nonprofit charity dealings, and the only response he can muster is to cry “witch hunt” and threaten those leading the investigations into his actions.

Oh, no …. not that political leader. I’m talking about Missouri Governor Eric Greitens.

Back in February of this year, Greitens was indicted on a charge of first-degree felony invasion of privacy after allegedly taking pictures of a sexual partner without her consent, for the purpose of guaranteeing she stay silent about their affair. (Both he and the woman, whose identity has not been released, were married at the time.) From the way this story was being told by both Greitens himself and the media, it was implied that the sexual relationship was consensual, but the photos and subsequent blackmail were not. Greitens and the Missouri GOP blamed a liberal conspiracy funded by George Soros for the attention and the indictment.

But the Missouri House committee that formed to investigate the allegations against Greitens has released its full report, and it tells a very different story. This woman, referred to as Witness 1, was not Greiten’s “mistress,” as she has often been called since her story was made public. She is his victim. As she tells it, their first sexual encounter was not consensual. She herself says she agreed with a friend who said she’d been “half-raped and blackmailed.” I’m not sure we need that “half” in there.

According to the witness’ testimony (and note: content warning for descriptions of sexual violence and coercion), she had a crush on Greitens and gathered that it was mutual. He asked her to come to his house to discuss their feelings while his wife was out of town. She suggested a coffee shop, but he was campaigning at the time and didn’t want to meet in public, so she agreed to come to his home. Her description of that meeting is disturbing. She says Greitens brought her to his basement to show her “how to do a proper pullup.” She seems to have thought this sort of strange, but she’s into fitness and says she thought he was planning some sort of “sexy workout.”

Again, she had feelings for him, emotional and sexual. She told the committee that while she was nervous and experiencing guilt–she and her husband were separated, but she describes feeling conflicted–she would have been “okay with a normal sexual encounter with him if he said, Hey I just want to have sex in the basement.”

Instead, Greitens blindfolded her, tied her to the pull-up bar, ripped open her shirt and pulled down her pants, exposing and kissing her body. “[T]hen I hear him kind of, like, step back,” she says, “take a step back and I hear – I can hear like a, like a cell phone – like a picture, and I can see a flash through the blindfold.”

The witness says she “started freaking out” until he untied her. She says she was crying and tried to leave the basement, but he grabbed her in a “bear hug” and laid her down on the ground. From the official House committee report:

I’m bawling my eyes out. Yeah, so I’m still crying. And then he’s like – I can tell he’s still, like, in it – he’s still in this – in this thing that he’s got in his mind of whatever he’s doing, and he’s still like messing with me.

42. Witness I further testified that Greitens pulled his pants down and “pulled his penis out.. . max, six inches or something” from her face while she was still crying and felt that she had no other choice if she were going to get out of the basement. (Footnote 46)

43. As to whether she consented to oral sex at that point, Witness I testified, “It’s a hard question because I did it – it felt like consent, but, no, I didn’t want to do it.” (Footnote 47) She further explained, “Coerced, maybe. I felt as though that would allow me to leave. That’s what he wanted I felt that’s what he wanted …. ” (Footnote 48) Witness I then agreed with the statement that she “didn’t feel necessarily able to leave without performing oral sex.” (Footnote 49) She further testified, “Looking back, yes” she believed that saying no when she was bound and blind-folded extended to not consenting to further contact, but, “In the moment, I was so emotional” and that one of the emotions was “definitely” fear for her “physical self.”

Greitens has responded to the allegations, calling them (of course) a “political witch hunt,” because no one in politics seems to know what that phrase means anymore. He reduces this to a “personal mistake,” as if the issue here is infidelity. It’s not. The issue is nonconsensual sexual acts. It’s blackmail. It’s being an (alleged) garbage heap of a human being who happens to be in charge of an entire state.

And as if all of this weren’t enough (it is, though), this isn’t the only investigation currently looking into Greiten’s actions. Missouri Attorney General Josh Hawley announced this week that his office has reportedly found evidence that Greitens misused a charity donor list for political fundraising purposes, a potentially criminal act on a federal level.

In stunningly Trumpian fashion, Greitens has responded by requesting a restraining order to be issued against the Attorney General (who, by the way, is a Republican). He argues that Hawley cannot be impartial, having called for the Governor’s resignation after the above report was released last week. Greitens, therefore, wants a separate investigator to handle this new case. A spokeswoman for Hawley said the request was “frivolous.”

“The fact that the Governor has been credibly accused of sexual misconduct does not mean he is exempt from investigation into other wrongdoing,” she said.

I live in Missouri so I’ve held off on writing about the extreme shitshow that is Eric Greitens. (You can, however, hear me rage about him on my podcast, Missouri Loves Company, if you so choose. /self-promotion.) But this isn’t local news. It’s an all-too-familiar example of the kind of toxicity we’ve spent centuries voting into office. In so many ways, the last year+ has felt like a tipping point–like a breaking point, really. I’m holding out hope for the opportunity to host a Greitens impeachment party, but if that day doesn’t come, I’m still confident that as more and more women run for office, and as these issues become the subjects of national conversations, the long, sad era of electing men like Greitens is coming to an end.