Every Harry Potter book is magical—some more so than others. 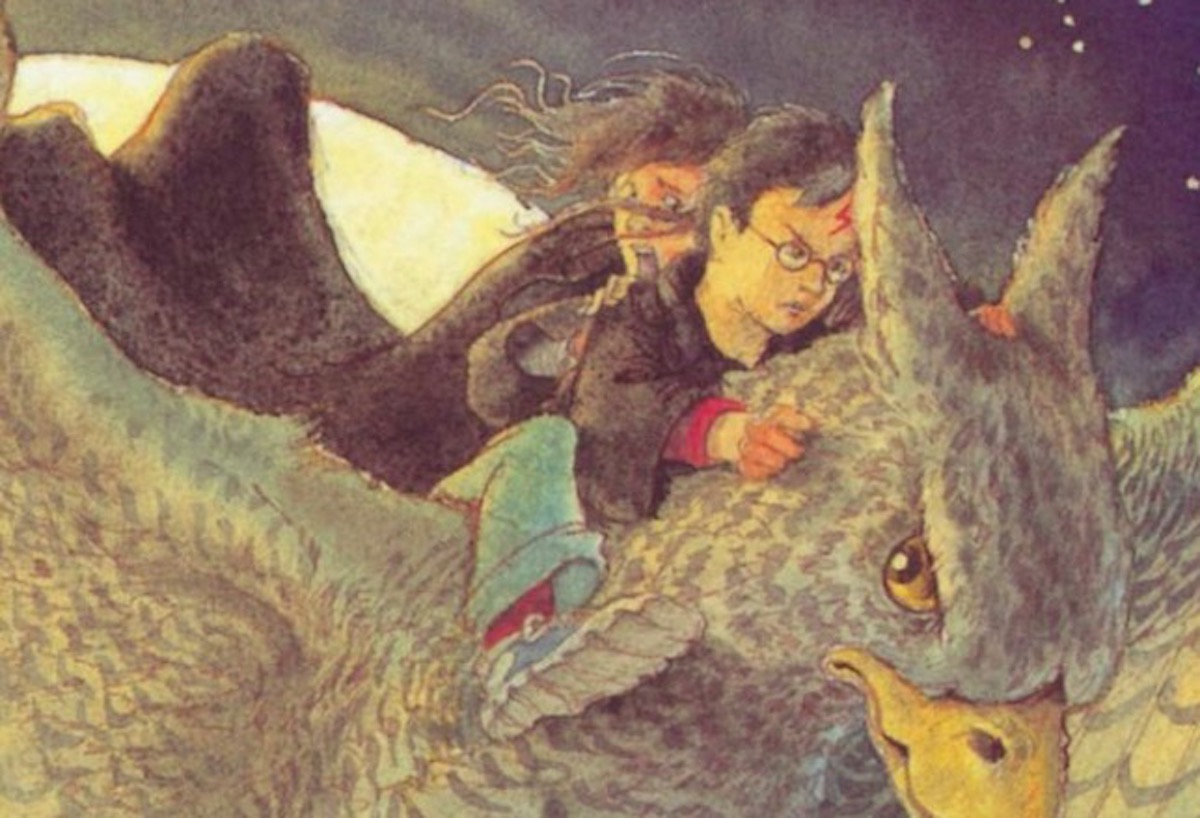 Scarcely a day goes by in which I don’t find myself lost in some warm and fuzzy memory related to the Harry Potter series. Nearly twenty-one years after the first book hit stands, I’m still shedding tears over Dobby, shaking my fists at Umbridge, and wondering what a true Butterbeer really tastes like. J.K. Rowling gifted us with a magical world readers never wanted to leave, especially for those of us who were lucky enough to grow up in the Potter generation.

While I love each and every precious book in this series as if it were my first-born child, when it comes down to it, not every Potter book is created equal. Like it or not, some installments of the series clearly rise to the top, while others float quietly towards the bottom. Although the hierarchy of Harry Potter books is in many ways subjective, I feel there are some undeniable flaws and successes that can be used to rank the series from worst to best.

In order to keep things as fair as possible, I stuck only to Rowling’s original seven books, setting aside the recent Cursed Child (authored not entirely by Rowling) and the short companion books that accompany the original series, like Quidditch Through the Ages and The Tales of Beedle the Bard.

While some people (not me) fell in love with the Cursed Child play, I can hardly accept it as true HP canon, and the companion textbooks feel too brief to stand up against the original seven (although I must give an honorable mention to the quippy and charming Fantastic Beasts and Where to Find Them).

Instead, I’m ranking all the real-deal Harry Potter books. Here’s hoping I don’t receive any furious Howlers in response! Instead, leave your own definitive ranking in the comments below.

7. Harry Potter and the Chamber of Secrets

In a series of truly fantastic magical installments, Chamber of Secrets is unfortunately the least fantastic. While Sorcerer’s Stone does a solid job at effortlessly setting up Harry’s world, Chamber of Secrets does little to further readers’ understanding of this world or the characters within it. Instead, the book gets consumed in a plot filled with unseen monsters and the petrification of students, which is terrifying and gripping in its own right, but doesn’t offer much in the way of lasting character development.

I spent much of the book wondering if Harry might be the heir of Slytherin (and what that might mean for his future), only to find out that he’s not, while simultaneously dealing with the loss of Hermione for far too many chapters. Yes, the introduction of Tom Riddle is a thrilling twist, but the rest of the novel is lacking the quieter everyday moments of Hogwarts life. Intimate exchanges in the common room or light-hearted squabbles in the Great Hall are some of the best bits of the series, and Chamber of Secrets could certainly use a few more of them.

6. Harry Potter and the Sorcerer’s Stone

You always remember your first, and Sorcerer’s Stone is no exception. It was the one that started it all—the one that introduced me to the boy who lived and made me fall in love with the magical world I was discovering alongside Harry.

There’s a certain nostalgic sheen on the first Potter installment, but looking at it critically, Sorcerer’s Stone doesn’t fully stand up to most of the series’ later books. Reading it now, it feels too brief—Rowling breezes through months of the school year that would occupy hundreds of pages in later books—and the world itself is just a fraction of its realized potential.

RELATED: 8 Harry Potter Audiobooks That Will Transport You to Hogwarts

Still, it does exactly what the first book in a seven part series should do, introducing readers to the most important characters, acclimating us to our environment, and building a setting we’ll want to come back to again and again. I wish it had more details about Harry’s first year, but later books had those in spades.

5. Harry Potter and the Goblet of Fire

A solid read, Goblet of Fire fits comfortably in the middle of the pack. Jumping from Azkaban’s 317 pages to a formidable 636, this installment is the first of the long, heavy Potternovels we now know and love. Goblet of Fire offers a lot of good, from our introduction to the Triwizard Tournament and a whole slew of new characters to some jabs at humor around the Yule Ball and Moody’s general antics, until finally we’re asked to watch as Voldemort chillingly returns to his “human” form.

Still, this book doesn’t stand up to a reread quite as well as some of the others, as the tournament structure makes things a little more regimented, predictable, and even boring on subsequent reads. And while Cedric’s death hit me hard the first time I read Goblet of Fire, the murder of this somewhat minor character is much easier to swallow when you know the kind of brutal tragedy that is to come in the series.

4. Harry Potter and the Order of the Phoenix

Easily the most polarizing of the Potter novels, Order of the Phoenix offers the series’ highest highs and lowest lows. This lengthy book might as well be titled Harry Potter and the Struggles with Puberty, and fans of the franchise certainly know why. Harry spends most of the novel slumping around Hogwarts, complaining that Dumbledore is ignoring him, lusting after a grieving Cho Chang, and being unnecessarily prickish to Ron and Hermione. While his behavior is entirely justified, considering he’s a moody 15-year-old whose friend recently died in his arms, it doesn’t make for a very fun read.

Still, Order of the Phoenix is able to redeem itself because of its wondrous highs. I love the discovery of the Order itself, the establishment of Dumbledore’s Army, and the glorious, tragic battle at the Ministry. While forces of evil (read: Umbridge) threaten beloved characters in ways I never thought possible, the budding rebels also fight back. Chapter 29, “Career Advice,” alone is reason enough to love this book, and Fred and George’s legendary escape will go down as one of the greatest moments in Hogwarts history.

3. Harry Potter and the Deathly Hallows

While no fan of the Potter series ever really wanted it to end, Deathly Hallows let us go out on a high note. Beautifully wrapping up the series in a satisfying and largely unpredictable way, the seventh installment left me in tears of profound sadness and unrelenting joy. This stunning farewell to an epic journey forced readers to say goodbye to many of our favorite characters as we endured a shocking, terrifying, exhilarating, and inspiring story that pushed the trio (and us fans) to our very limits.

RELATED: 15 Harry Potter Quotes to Live Your Life By

Still, Deathly Hallows is not without its faults (The Epilogue being one of the worst.) Much of the middle of the book drags a bit as the trio moves from campsite to campsite, and Rowling’s decision to let Harry sort-of-die but then come back to life feels like a slightly weak and confusing choice at this point in the game. In the end, though, the final battle of Hogwarts and the face-off between Harry and Voldemort was everything I could have asked for, and after all this time, I’ll remember it always.

2. Harry Potter and the Half-Blood Prince

It may come as a surprise to some to see Half-Blood Prince climb so high on this list, but the sixth installment of the Potter series is one that endures and persists and fights its way into my heart again and again.

Late in the series, Half-Blood Prince finally finds a perfect Potter balance, striking a chord between intensely dark drama and lovable comedy in a way that offers the best of both worlds. With a healthy portion of friendship drama and a good dose of exciting plot, Half-Blood Prince gives a poignant, meaty back story to Tom Riddle and lets readers inside the mind of Snape, one of the series’ most complex and fascinating characters.

The book teaches readers more about the horcruxes, allowing us to feel closer than ever to finally vanquishing the Dark Lord before brutally facing the death of our beloved headmaster. And while it would have been easy for the silly relationship qualms among the trio and friends to seem trite in comparison to the rest of the book’s dark themes, things like the Slug Club and Quidditch and dates with “Won-Won” instead offer a charming and comical respite to the larger problems at hand. Half-Blood Prince is rich with humor, history and heartbreak, and I still can’t get enough.

1. Harry Potter and the Prisoner of Azkaban

When it comes to Harry Potter, it doesn’t get better than The Prisoner of Azkaban.

Rowling’s third foray into the world of magic and mischief is the most endearing and enduring, painting a stunning portrait of Harry’s past and the family he never knew.

We see Harry truly begin to grow into his own, facing his fears as he defeats dementors and conquers the demons his father left behind.

Prisoner of Azkaban gives readers the pleasure of learning about the Marauders and brings to life some of the series’ best and most beloved characters in Remus Lupin and Sirius Black.

I fall in love every time with the two misunderstood outcasts who have been rejected by society, and enjoy watching as our young trio overcome every prejudice to help Remus and Sirius. Harry, Ron, and Hermione grow in empathy, wit, altruism, and general magical skill to save both the “criminal” and the hippogriff, and we see that James’ and Sirius’ dedication to helping a friend at all costs did not die with the previous generation.

Ironically, it’s the story that’s been touched least by Voldemort’s evil, and yet it’s the book that exemplifies everything the Potter series stands for, proving that nothing and no one is exactly what it seems on the surface.

In the end, Prisoner of Azkaban is the Potter book I’ll pick up again and again, always solemnly swearing that I’m up to no good.