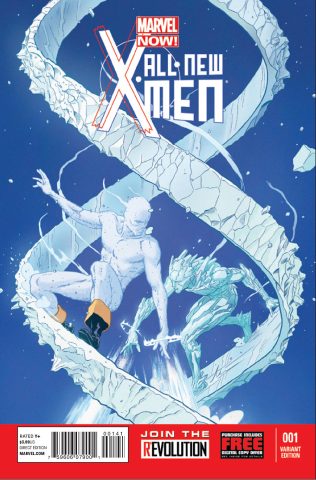 Although greater inclusivity in X-Men is obviously cause for celebration, the panels also raised some concerns. If young Iceman is gay, how would All-New X-Men explain the implications of his older counterpart still being in the closet? And why did a scene that could have been a hugely positive moment for LGBTQ+ readers have to be marred by bi-erasure?

In an interview with MTV yesterday, Marvel Comics Editor-in-Chief Axel Alonso dispelled some fans’ concerns about Iceman Sr.’s sexuality, saying “the obvious question is that once the young Bobby Drake has accepted and embraced who he is, what are the ramifications for his adult counterpart? It’s safe to say that will be dealt with […] This is who the character is now.”

Regardless of how well upcoming storylines will handle Adult Iceman’s sexuality, it’s still unfortunate that Bobby’s big reveal reinforced some common stereotypes about bisexuality; in particular, Jean’s skeptical reaction when Bobby says he’s bisexual and her statement that he’s “more…full gay” feed into the misconception that bisexuality is some sort of layover on the path to admitting one’s actual sexuality, and in some way less ‘truly gay’ than other identities on the LGBTQ+ spectrum.

A thank-you note from a fan on Bendis’ Tumblr perfectly encapsulates the misconceptions about bisexuality that Jean and Bobby’s conversation reinforces:

Hey Mr Bendis, I just wanted to say thank you for making my favourite mutant gay. A lot of people thought it was offensive to bisexuals and that Jean was rude but I didn’t see it that way. Many gay people use the bisexual label as a “transitioning” phase during the coming out process and what Jean did wasn’t that rude because I read Jean’s comment as her not wanting him to continue lying to himself under another label which was awesome.

But bisexuality isn’t self-denial or a phase on the way to becoming ‘legitimately gay,’ and the fact that a reader felt that definition was supported by All-New X-Men #40 should set off alarm bells for a creator interested in responsible representation. Bendis replied:

I will say I’m super bummed that some people are reading any sort of bi erasure and biphobia into the interaction between bobby and Jean. nothing could be further from the truth. nobody involved in this feels anything like that. and if anybody reading the horribly scanned leaked pages even thought that for a second please free your mind of that. it’s not there. this is a very unique story because one character, from a different time and a somewhat limited worldview, is reading another character’s mind. this is in no way the traditional ‘coming-out’ story if there even is one, there is also this big chunk of time travel weirdness involved. none of this is a statement about all things to all people. but it does give us a unique perspective that I thought was worth approaching. this is Bobby’s story. nobody else’s. some will find connection to it, others might not. and this is just the first part of a larger story. See the upcoming giant size uncanny 600.

Although it’s heartening to hear Bendis say that neither he nor any of the X-Men team intended bi-erasure, his statement here also indicates a fundamental disconnect: just because it wasn’t intended, doesn’t mean it’s not there.

Bendis has referenced the unusual given circumstances of the X-Men universe multiple times since the panels were leaked, both in the above Tumblr post, on Twitter, and in a recent interview with Comic Book Resources, and it’s insulting to see him conflating fans’ concern over respectful representation with confusion over plot elements. Yep, time travel is involved. Sure, having a psychic character complicates things. But I’m not confused by the admittedly extreme circumstances of Bobby’s coming-out, I’m confused as to why Bendis is defending using bi-erasure to tell an otherwise beautiful story.

I doubt my concerns over bi-erasure will be alleviated by further issues of All-New X-Men since they’re so specific to Jean and Bobby’s dialogue during his pivotal coming out scene; but writing representation is hard, and writing positive representation is even harder, so if Bendis had been receptive to fans’ criticisms, I would still have counted this one as a win. Unfortunately, for the most part, that hasn’t been the case:

@myrdraal2001 nothing is being dismissed.

@carlamlee there is no biphobia in my work or in my heart.

@andrewstwrt because it’s not there. Not in my heart or in my work. Read it

If members of a marginalized group speak up about content you have made as a creator who does not identify as part of that group, maybe you should listen?

To clarify: I’m not mad Iceman is gay instead of bi, I am very excited that Bendis gave X-Men another canon gay character, and I definitely don’t think any bi-erasure in All-New X-Men was intentional. I can also tell the difference between a coming out story that is “unusual” because of the world’s given circumstances (mutants! time travel!) and one that is unusual because it insults other identities unnecessarily. Similarly, I can distinguish between when a character is bi-phobic in a way that is deserved and serves the story, and when a character is bi-phobic because she wasn’t written with enough nuance.

That being said, Jean and Bobby’s conversation is problematic and indicative of how pervasive misconceptions about bisexuality still are and how important it is for creators with an influential platform like Bendis’ to consider their words carefully and listen to the groups they’re writing about.

The Mary Sue reached out to Bendis for an interview or statement this morning but has yet to hear back.