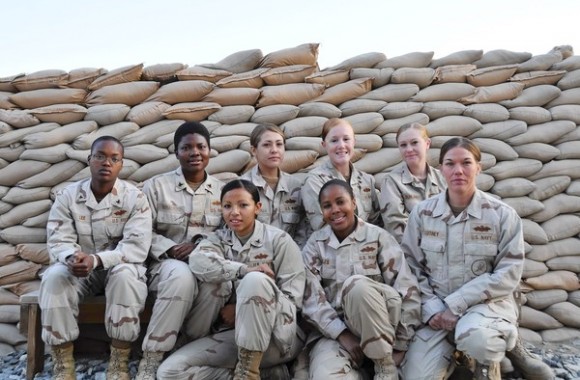 It was an ordinary task that was taken on by an extraordinary group — in Helmand province in Afghanistan, a project to build four 20-by-30-foot barracks in the mountains was handed over to the U.S. Navy’s construction forces, the Seabees. Not an unusual request. However, for the first time ever, the Seabees team tasked with building the barracks consisted of all women. Not only did they complete the project, but they completed it way ahead of scheduled, breaking Navy records. Not too shabby, ladies!

The team, who are all stationed at Naval Base Ventura County, worked through freezing nights and blistering winds to complete the construction of the barracks. But even as they worked hard and rapidly to finish ahead of schedule, they’d had no idea that they had broken records. But military officials confirmed that they were the first all-female team in the Seabees’ 70-year history to take on a construction project from start to finish.

The Seabees were first formed during World War II as a means of employing soldiers who were also skilled at construction. Women first joined the Seabees in 1972 and started serving alongside their male counterparts in 1994. In this particular situation, there simply weren’t a lot of male Seabees around in the middle of November, when the construction was needed. But the women from Naval Base Ventura County were ready to go to work. When they showed up, naturally some less-evolved soldiers “rolled their eyes” at the sight of an all-female team. But then they went ahead and worked 12-hour days, finishing the barracks in a period of two weeks. Normally, it takes three. They also went ahead and installed electricity and plumbing, then added an operations center and a gym. Since they had the time, you see.

The LA Times describes the conditions they endured:

Mornings were so cold that ice coated the piles of wood, soaking their gloves as they began throwing up the buildings. They took showers using freezing water pulled by bucket from a well. They ate rice and beans. They disposed of solid waste in a bag and then burned it in a pit, [builder Shelby Lutrey] said.

“When you join the military, that’s what you expect,” said the native of Scottsdale, Ariz. “It might not be the most comfortable, but it’s necessary.”

Lutrey cited “strong team spirit” as the reason for the team’s success. The women who worked with her are Gafayat Moradeyo, Kadisha Lee, Carla Diazcastillo, Amber Mann, Kacie Dunlavey, Jessica Vera, and Shayla Miles. While they did work spectacularly well as a team, it is unlikely they’ll work together again, given their varying skills.