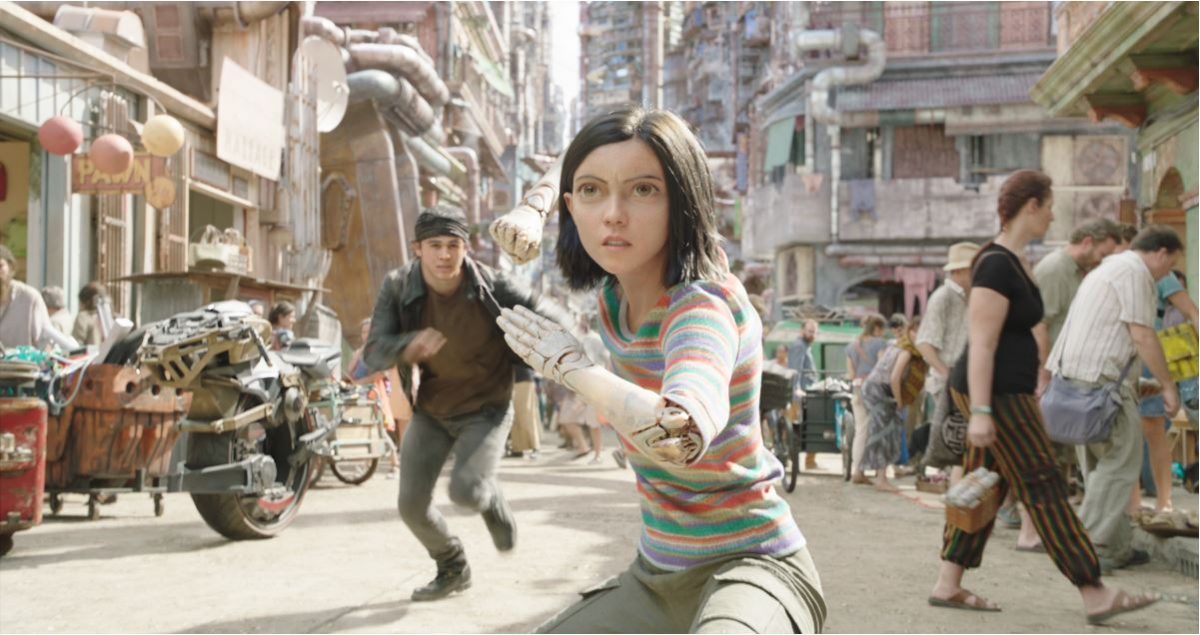 Hollywood has long struggled to translate manga into a satisfying live-action film experience. Often the magic and uniqueness of a manga world is filtered out through a Westernized lens, literally whitewashed until it no longer resembles the original art on which it is based.

This hasn’t stopped studios from continuing to try their hand at the genre, with mostly lackluster results. That is, until James Cameron and Robert Rodriguez brought Alita: Battle Angel, the long-gestating adaptation of Yukito Kishiro’s manga series Gunnm, to exhilarating life.

The story is simple: it’s 2563, years after a global war called “The Fall” decimated the planet. Now, society is divided into to worlds: Zalem, the city in the clouds where the Haves reside, and Iron City, the scrappy, violent mecha melting pot of the Have Nots. Dr. Dyson Ido (Christoph Waltz), a kindly cyber-surgeon, is combing through a junkyard when he finds the head and torso of a still living cyborg. He takes it home, houses it in a new shell and christens it Alita.

In a story that is part Frankenstein, part Pinocchio, Alita (Rosa Salazar) awakens with no memory of her past life. She wanders through Iron City as an open-hearted, wide-eyed (literally) innocent. Salazar’s performance, which is rendered through motion-capture VFX, is blended together with large Anime-style eyes. It’s a big gamble to base the film around a mo-cap character, and it pays off. Alita is stunningly rendered, able to emote and bring trough Salazar’s acting. While some may experience an uncanny valley effect with Alita’s design, it worked seamlessly for me.

Of course, Alita isn’t just your cyborg girl next door. She quickly discovers that she is, in fact, a martial artist and warrior, with a hidden past as a soldier. Alita quickly uses her skills to register as a Hunter Warrior (a futuristic bounty hunter) and a Motorball athlete. Motorball plays like a cross between lethal roller derby and BattleBots, where weaponized cyborgs smash each other to bits in the hopes of being named the Final Champion, which earns the winner a ticket to Zalem.

Along the way, Alita encounters Dr. Ido’s ex-wife Chiren (a largely wasted Jennifer Connelly) who is working to build superior cyborgs with Motorball entrepreneur Vector (Mahershala Ali). She also finds love with the blandly handsome street hustler Hugo (Keean Johnson). The romance subplot is probably the weakest part of the film, steeped in formulaic cliché and a lack of chemistry.

There’s no shortage of corniness and cliché in the film, much like Cameron’s previous work. But honestly, I was too distracted by the dazzling special effects to really care. Alita features wildly inventive and kinetic action sequences, both in the fight scenes and on the motorball track. The film is stacked with digital eye candy, and you find yourself so immersed in the world of Iron City that any plot contrivances start to fade away.

The film, which is best seen in IMAX 3-D, is truly a breathtaking experience. Like Avatar, the story may be lacking in some areas. But the experience of viewing Alita: Battle Angel is a non-stop, entertaining as hell ride.