INTERVIEW: Being Lolita Author Alisson Wood Challenges the Idea of Memoir as Catharsis 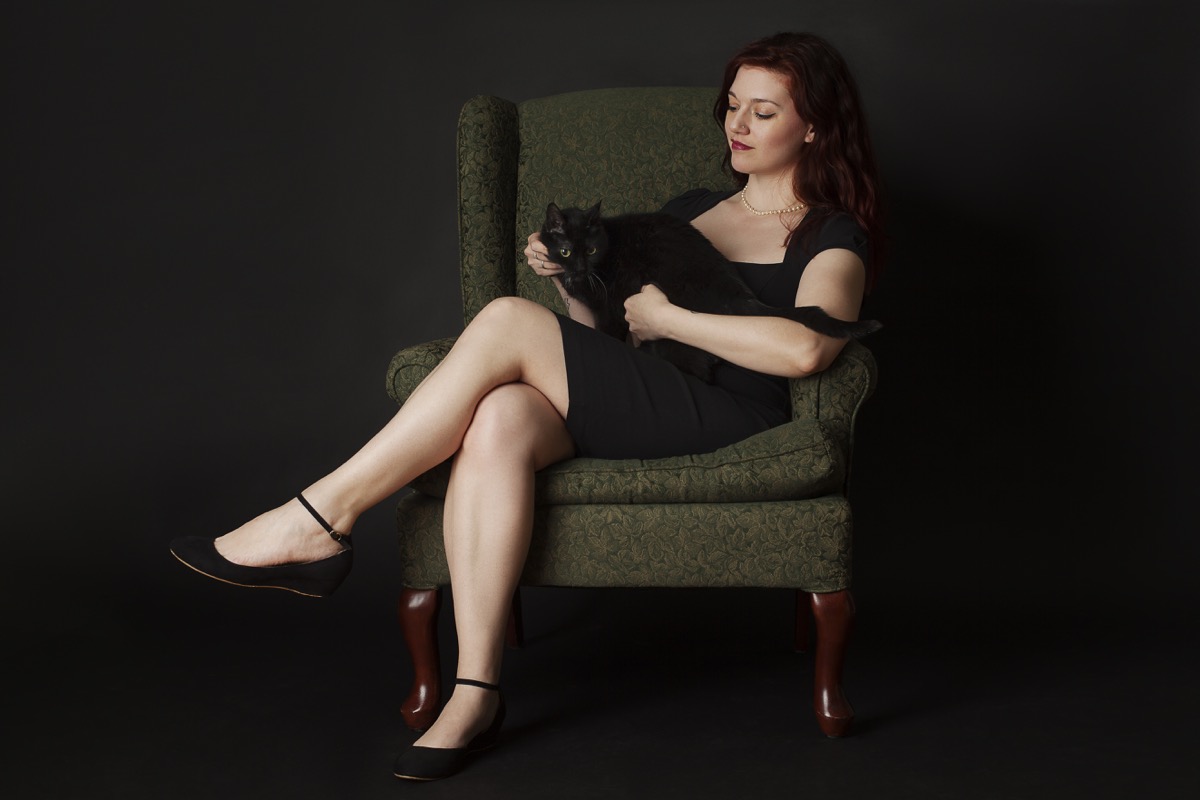 When Alisson Wood was 17, her creative writing teacher saw a talent in her that needed fostering. Thus, she introduced Wood to an English teacher, whom Wood calls Mr. North—or simply the Teacher—in her memoir, Being Lolita. At first, their relationship was appropriate: They’d meet after school and write together. Soon after, however, the Teacher began grooming Wood for a sexual relationship, which began after she graduated from high school the following spring.

Wood, now 36, examines her relationship with the Teacher chronologically in Being Lolita, dividing her story into parts that mirror the structure of Vladimir Nabokov’s infamous novel, Lolita. As the title of Wood’s book makes clear, Nabokov’s novel—about an adult man who grooms and abuses a preteen girl—plays a significant role in her relationship with the Teacher, whose obsession with the novel is so great that he even drinks the same cocktail as Humbert Humbert.

“I was re-reading Lolita for the umpteenth time and it just suddenly struck me: ‘Wait a minute. This is the exact same narrative structure my experience took,’” Wood told The Mary Sue. “Part 1 is this sort of extended seduction, this grooming/predatory behavior from Humbert Humbert/my teacher to Dolores Haze/‘Lolita’/me. The break between Part 1 and 2 is when they sleep together for the first time, and then Part 2 is this extended series of road trips and just trying to escape and not get caught. Even in Lolita, they settle in Berkeley. That’s where Humbert starts teaching again, and Dolores goes back to school, and many say that Ithaca, NY was a model for Berkeley, for Nabokov, because he taught at Cornell for many years and lived there for many years. And I went to Ithaca College. And the teacher and I began meeting there.”

“It was funny. Once that overlap occurred to me, it was just sitting there. I didn’t even have to reach to take it. It was just like, ‘Oh, there it is! That’s how I’m going to structure my book,” Wood explains. “One huge divergence is that at the end of Lolita, everybody’s dead. It’s Shakespearian in that way: Blood all over the stage, no major characters remain. And I don’t die! So I get a Part 3, which is my life after, and questioning what would have happened if Lolita had survived, through what happened to me because I survived. Once I figured that out, honestly, the book became easy in some ways.”

Wood’s memoir is candid and often, in her own words, “brutal.” Wood pored over as many primary source documents as she could from her relationship with the Teacher, including her journals, as well as hall passes and notes she squirreled away, despite his insistence on taking and destroying all evidence of their inappropriate flirtation.

“It physically made me ill to have to face who I was at 17,” Wood says of this process. “I was just so angry and frustrated with myself. I felt like I was constantly saying to myself, ‘How could you be so stupid? What were you thinking? How did you not see through this?’ But of course, all of that blame and judgment and anger, the feelings behind that were really shame, pain, and trauma. It was hard, and I did a lot of work in therapy, so I could keep connected to the page and still be processing what happened. I was really surprised that by the end of writing the last chapters of Part 1, I got really sad. I just burst into tears, because I suddenly realized how much I actually cared for my 17- and 18-year-old self, and how much empathy I had for her by the end of this experience, and how much I felt for her.”

“It’s completely appropriate, developmentally, for a teenager to have a crush on their teacher. That’s normal. It’s appropriate for them to like someone one day and not like someone another. To think a boy on TV is cute, to think a teacher is cute,” Wood continues. “What’s not appropriate is for an adult high school teacher to take advantage of that. It is not appropriate for a high school teacher to be asking a student to be keeping secrets. At first, I was really mad at myself for doing all those things, but then by the end, I realized, no, no: 17-year-old Alisson was doing the best that she could and just wanted to be cared for and be seen and supported. She wasn’t asking to get fucked. It should have been my teacher who understood that. The fault wasn’t mine. It was very surprising to suddenly understand that with such clarity, to feel so tender toward myself at the end, because I did not start out feeling that way.”

Throughout Being Lolita, Wood takes moments to communicate directly with the reader and to reflect on patterns she wasn’t able to see at 17, but could identify after she took space and time away from the Teacher and their relationship. She tells The Mary Sue that when she first intended to write this book, she thought it would be “a love story, about our star-crossed romance and how we had overcome the obstacles and how, yeah, it got kinda shitty at the end, but it was still love. I really believed that was what happened in the moment. As I try to trace in the book, it took a long time for me to actually understand what had happened to me, and for me to process it.”

A turning point came when Wood discovered that a conversation she thought had occurred in May of her senior year—after she had turned 18, just weeks before graduation when she and the Teacher could be together—had actually occurred in November, just weeks after they met. During his study hall, they passed notes back and forth wherein he asked for explicit information about her body and gave her equally explicit information about his.

“I remembered it happening! And I truly thought that it happened in May. At that point, there would have been months of things—dirty notes, meeting secretly, telling me he loved me—that led up to that. Then I found it explicitly referenced in a page of my journal and it was on November 21. November 21. He had known me for two months,” Wood says. “I was still 17. That was a moment when I realized—when it truly settled into myself—just how egregious, how deeply inappropriate, how incredibly manipulative and predatory this man was towards me. That was one of the moments when I was like, ‘Oh, wait a minute. Fuck no. I was not this sexy, powerful thing. I was being groomed.’ And that was a moment where I felt like I could put my finger on something and go, ‘That. That right there. That is a line that never should have been crossed and cannot be uncrossed.’ That was a moment where I had it, black and white in front of me.”

Wood knew she would write this book for years, though it took some time for the structure and form to take shape. Several people, she says, suggested she make her story into a novel, but that didn’t sit right: “I knew that part of the power of this book and of telling this story was the fact that this is real. This is what happened to me; it’s not just some literary, fantastic idea. This happened. These abusive and predatory relationships between teachers and coaches and other men in positions of power—it’s pervasive and it happens all over.”

As Wood’s relationship with the Teacher became increasingly abusive, he told her to stop writing, because it put them at too much risk of being found out. If anyone knew he had waited to be with her until after graduation, he insisted, he would be fired from his teaching position. It wasn’t until Wood began to work with professors in college that she found the ability to write again.

“I think in high school, my power got taken away—as a writer, as someone who was creative, as someone who felt like they had a voice—by my teacher, when he manipulated me, when he preyed upon me, when he used this impulse of mine to write to his advantage and to make me vulnerable,” she says. “Then when I was in college and away from him, and I began taking creative writing classes again, I had these wonderful, supportive professors who—instead of seeing my impulses and my desire and my longing to write as an opportunity to take advantage—they saw it as something to support and encourage. They gave me my power back, and that was when I began writing again.”

In many ways, Wood says, she wrote Being Lolita for the reader. “My hope is that a lot of people can connect to this book, and that’s really what I think the power of memoir is—not to heal, not to make anything better, not for catharsis—but to make you feel not alone. I deeply believe that’s the point of art: To communicate, to share, to connect. I hope that my book connects to readers, so that readers can feel more connected to themselves. I’m just so grateful and honored that I’m getting the opportunity to do that, and hopefully readers will enjoy the book—as much as you can, with a book about awful things.”

Some early readers told Wood they wished there was a clearer trajectory of healing in her memoir. However, Wood says, our expectations of memoir—particularly women’s memoir—are often deeply unfair, and they frequently ignore the realities of trauma and its lifelong weight.

“I wish we could all heal from trauma and it could be wrapped up in a bow and victims could  all be better now. But the writing of this book was not a cathartic experience for me. It made me understand this experience and myself far more, but it didn’t make it better,” she says. “This experience is something that I will carry with me for the rest of my life. It will be carried in different ways, and it won’t always be this overt, forward-facing thing, but it will always be with me. I wish that I could tell my readers, ‘Yes, writing this book made it all better. Yes, you, too, can be healed.’ But that’s just not possible. I wish it was.”