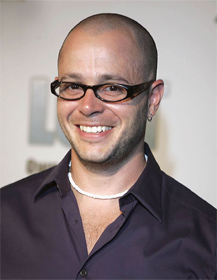 Damon Lindelof, a.k.a. the less grumpy of the two former executive producers of LOST, has just sealed the deal for his first solo screenwriting contract since the island adventures ended. Lindelof will be taking on rewrite work for a prequel for the Alien franchise, which could use a jolt of popularity. After all, when Joss Whedon was talking about cool props he has at home, he said “an alien egg, but I had to bury the franchise to get it.” Well let’s hope Lindelof can dig it up and give it some weird alien CPR or something.

For those of you worried that Lindelof might just start over and make up the whole prequel as he goes along, leading to an unsatisfactory, overly spiritual ending, never fear! Lindelof has already met with 20th Century Fox and Ridley Scott, who Fox wants to direct the feature, to discuss ideas for the prequel. See? Planning ahead. But, perhaps unfortunately depending on your sentiments toward the franchise, “the exchange of ideas between them sparked a take that could well turn out to be a free-standing science fiction film,” according to Deadline.

Lindelof is currently writing the script for the Star Trek sequel with Alex Kurtzman and Roberto Orci, but the Alien franchise has always been an inspiration to him (even Resurrection?), so he couldn’t resist once he heard it was available.

The original script he will be rewriting was penned by Jon Spaihts, whose other recent scripts for Passengers and The Darkest Hour are both in preproduction. So while we may not have any solid testament to his talent, his draft inspired Ridley Scott to move from just producing to actually directing the film. So at least there’s something promising behind all this Alien craziness.

(Via Deadline via DarkUFO)