Listen to Audible's Alien: Out of the Shadows | The Mary Sue

The Mary Sue Exclusive Clip: Listen to Audible’s Original Drama Alien: Out of the Shadows

Could your commute use a little more Ripley? 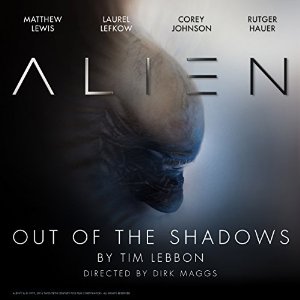 Image: Alien: Out of the Shadows cover

On April 26th (designated “Alien Day” by the powers that be), Alien fans will be able to listen to a brand-new Alien story over on Audible.

As a child, Chris Hooper dreamed of monsters. But in deep space, he found only darkness and isolation. Then, on planet LV178, he and his fellow miners discovered a storm-scoured, sand-blasted hell – and trimonite, the hardest material known to man.

When a shuttle crashes into the mining ship Marion, the miners learn that there was more than trimonite deep in the caverns. There was evil, hibernating and waiting for suitable prey. Hoop and his associates uncover a nest of Xenomorphs, and hell takes on a new meaning. Quickly they discover that their only hope lies with the unlikeliest of saviors….

If you want to find out if Alien: Out of the Shadows is for you, you can take a listen to this exclusive The Mary Sue clip below. Warning for gore, and, uh, general scariness.

You can find out more info on the drama below, and preorder Alien: Out of the Shadows over on Audible.

A new chapter in the Alien franchise, the sci-fi audio drama is directed and produced by the renowned radio director Dirk Maggs (radio series of Hitchhiker’s Guide To The Galaxy), based on the original novel by award-winning author Tim Lebbon.
The story follows Chief Engineer Hooper (Corey Johnson), who finds himself in command of a stricken orbital mining vessel after its captain is killed. Hooper finds himself not only responsible for the lives of his fellow crew, but also for the survivor of the only previous alien encounter, Ripley (Laurel Lefkow).

Hooper’s ship, a large mining freighter, is in orbit over a planet whilst servicing a mine on its surface below. Suddenly, two of its drop ships appear unexpectedly from the storm-lashed planet, with on-board cameras revealing alien creatures are loose on the vessels, attacking the mining crew on their return to the freighter. The crew must struggle not only against the ferocious predatory aliens but also against Ash (Rutger Hauer), the Artificial Intelligence on board the freighter that will stop at nothing to secure an alien specimen alive.