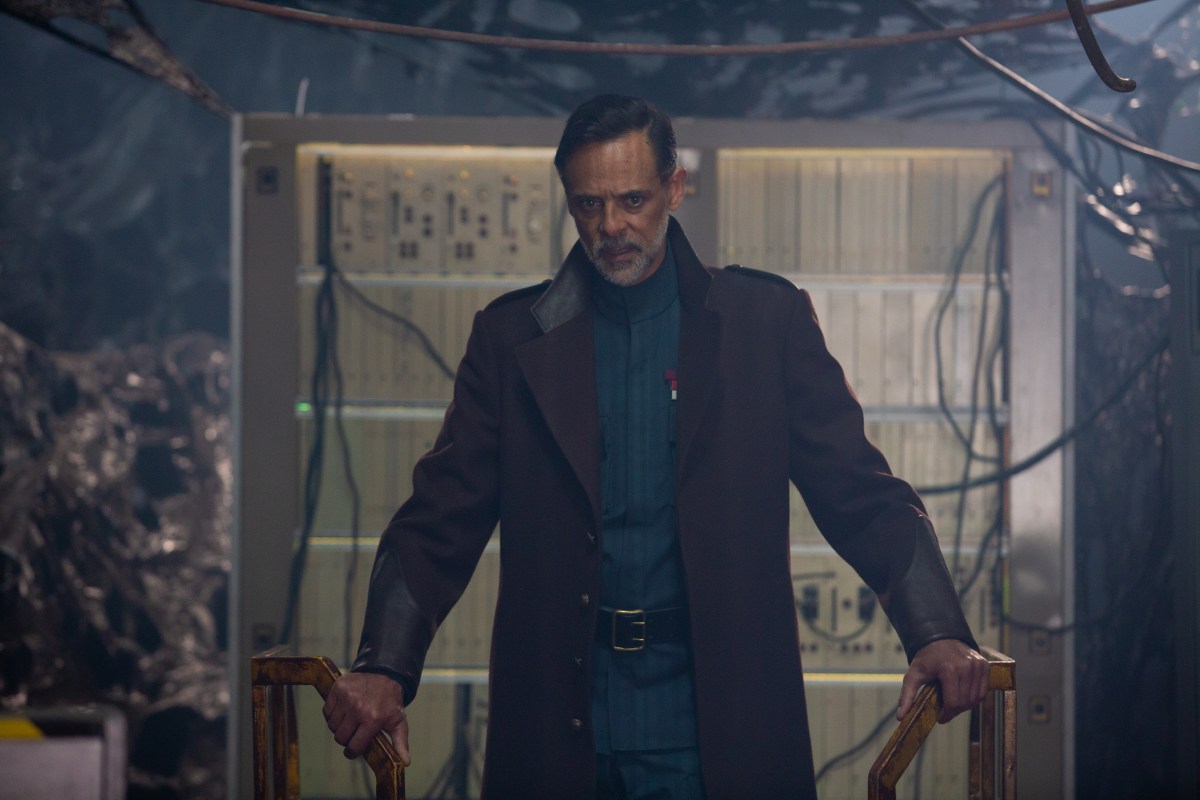 Fans of the world of sci-fi and fantasy know Alexander Siddig from a great many things. He’s our Bashir from Star Trek: Deep Space Nine, he’s Doran Martell on Game of Thrones, and now, he’s bringing the world of the classic B sci-fi films to life in Liam O’Donnell’s Skylines.

Set in a world where people must fight against an alien invasion (or try to work with them), the film has that classic sci-fi film of the ’80s feel, where you’d find it on VHS and watch it and pass it on to your friends, but it would just be like a secret little weird movie you all love. Going back to the way of the low-budget sci-fi movies, it’s a perfect return to form, and fun if that’s your sort of deal.

And we got to talk with Alexander Siddig, who plays General Radford, about the film!

THE MARY SUE: I’m really excited to talk to you because you exist in this nerd world where you almost touch every single property of nerdom, in a way? And when you come into a movie like this, which is very much within that realm of like “nerds are going to love it,” do you have a fear of continuing to exist in this space? Or is it somewhere you feel very comfortable returning to?

ALEXANDER SIDDIG: I love it here. This space is my comfort zone. And occasionally I venture out and that’s when I have to really sweat it out, you know, work hard on getting some kind of serious political movie done or whatever it is they want me to do. And this is where I like to crawl back to at night and, you know, go to sleep. [Laughs.] This is home. And so it was a real pleasure. I think someone mentioned to me that this is the first time I’d been back in space for 25 years, so that was kind of fun. I mean, the film is so unashamedly fun. It’s not trying to be anything, it’s not pretending to be Spielberg or, I don’t know, someone huge. It’s about as honest as a milk truck. So, it’s just what it is. And so, hopefully, it will take loads of people to a really cool place.

If they can give us twenty minutes of their time to begin with, which is when we’re doing all the build-up and the “This belongs to this and this happened here and that happened” and then someone hits a button and BOOM the movie just sets off. It just goes like a rocket.

THE MARY SUE: Yeah and so what drew you into Skylines in the first place?

ALEXANDER SIDDIG: The script, really. I mean I was very, very hesitant about it, not because of the fact that I didn’t like the script but because this script could go either of two ways. It could either be pretty dull or it could be a real romp. A really camp festival of fun and unashamed craziness and it turned out that when I talked to Liam (O’Donnell), it turned out to be the latter. And we were about to make a fun movie. You just can’t tell on the page, it just looks like…it’s just words and you don’t really know what it means or anything, it’s just “this thing breaks and that thing blows up and there’s fighting” and you don’t know what that looks like so it was a real leap of faith for me to go “hey, if you’re about to make what I term as a classic B movie, you know, Roger Coleman style that hasn’t been made since really the late 90s, because people can’t afford it and you’re doing this completely under budget, there must be something about you” and he pulled it off. At least, I think he pulled it off.

I watched it with my wife the other day and my god, we loved it. [Laughs.] This is great fun. Movies now are either Marvel or DC, you know one of those BIG events, or spectacularly serious and upsetting. And this is just in a niche of its own. Which is just a throwback to the days when people made movies regularly, which they don’t anymore.

THE MARY SUE: Yeah and it’s like, I was born in ’91, but it felt weird because I was watching this as an adult and this is definitely one of those movies that my brother would have like shown me as a kid.

ALEXANDER SIDDIG: Yes! Exactly, and I hope the nerds love it. I hope it stands up. Cause you never know. I’ve done junkets before and I’m there to go “This is amazing!” so I try and be very diplomatic and nice when I’m not absolutely sure it’s amazing, I’ve only done that once, actually. I’m very lucky. This time, I’m enjoying it because I think I can be hand on heart, I don’t think we’re lying to you, you will enjoy this if this is your bag. If this is what you’re kind of into, you’re not going to be let down. And that’s pretty great.

THE MARY SUE: So one of my favorite memories growing up was in high school, my brother and I would trade off showing each other shows so I showed him Lost and then he showed me all of Deep Space Nine and I loved Bashir and I’ve watched you on Game of Thrones and even knew you as Ra’s al Ghul, but it was fun to see you as this sort of villainous man so is that something that is more fun to play with?

ALEXANDER SIDDIG: So much fun. Because I’m let off, you know? I’m not doing something like, I don’t know, Cyrano or something where it’s like “oh, I just got to hold it together, just stick with the program here” but here, Liam just goes “hey, just go out there and have some fun.” It’s like saying to a sports person “Just go out there and play wherever you like.” [Laughs.] “Just do whatever you want, the team will work for you.” And that’s exactly what happened. And I just chewed up the scenery. And it was really delicious to chew. And hopefully, it shows that everyone had a really good time. Especially Lindsey (Morgan) you had to work so hard because she’s got all this athletic stuff to do and tons of lines and so she didn’t have a moment of recreation while she was making that film because she went to bed, got up, went to the gym, went to set, went to bed, got up, went to the gym, and that’s all that happened to her the whole time.

And there might be…a star might have been born in that film in Lindsey Morgan. There’s something about her, I noticed it while I was there, she’s kind of got it all. She’s got the charm and the attractiveness that an actor needs and she’s got this steely bitch that comes out whenever she needs to and it’s just amazing! And it’s very difficult for people to do both those things and they’re either Bruce Willis or they’re Angelina Jolie and she’s got them both in one.

THE MARY SUE: Yeah and it’s a perfect time for this to come out because I have my Twitter just like pulled up in the background on my computer and I can see “aliens” and the “Galactic Federation” trending so what good timing!

ALEXANDER SIDDIG: [Laughs.] Yeah, if you are believing everything you hear, the aliens are coming.

THE MARY SUE: So you’ve done series work and these fun sci-fi stories but what is one thing you haven’t been able to tackle yet in your career that you want to?

ALEXANDER SIDDIG: That’s a really good question and there can only be one answer. When you’re an actor, you’re an empty vessel waiting to be filled. You’re waiting for the next genius to come up with a great idea. And pick you to do it. So, in a way, I don’t know. The idea hasn’t been born yet. If I’ve already got it, if I already know the idea, it’s not going to be as good as the idea that I don’t know.

THE MARY SUE: So, I have to ask, and this isn’t be blowing smoke up your ass-

ALEXANDER SIDDIG: You can do that anyway.

THE MARY SUE: [Laughs.] BUT, so, I watched Game of Thrones but that show loved to kill off all my favorite characters. I watched Robb Stark die and took a break and came back to be like “Wow, I love Pedro Pascal” and all my friends were like “maybe don’t” and so I hated that it kept killing all my favorites but when I was about to stop, I found out you were going to be on it and was like “Wow, Bashir is going to be on Game of Thrones? I have to catch up!” and so do you find that a lot of your fans flock to your work from its place in nerdom?

ALEXANDER SIDDIG: Yeah, I think so. I think particularly if it’s not rude, I think particularly people when they were younger who were watching Deep Space Nine, they felt vulnerable, a bit other, not quite part of the mainstream, not the beautiful thing, and those are the people that really found Bashir attractive because he was kind of an expert at that. He just…missed the social pill that everyone took to help them all get along. But I loved him, he was a sweet guy, he’s just very attractive to people who aren’t out there and razzling and dazzling everybody and I’m like that as a person myself, I’m really kind of reticent. I’m not very good in big crowds, like that Counting Crows song, what is it, “she has trouble speaking when she’s nervous” that song, that’s kind of Bashir territory.

And a lot of people, a surprising amount of people, love that. And that’s why I think we all get along. I still hang out with a lot of those people in a social club Zoom that I do every week and it’s amazing. We had 100 people come and they come from everywhere in the world and young and old and they say “We loved Deep Space Nine and this and that and the other” and I just let them talk.

THE MARY SUE: That’s awesome because I think a lot of those spaces never existed and so I think that’s incredible that you do that.

Vertical Entertainment will release Skylines in select theaters, drive-ins, on demand, and digitally on December 18th.