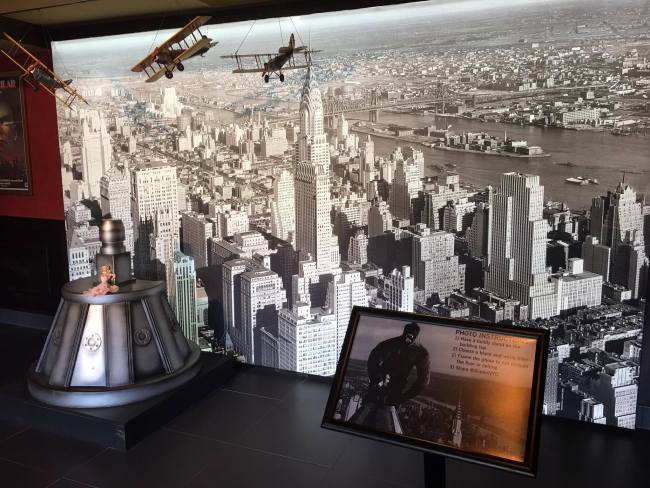 Alamo Drafthouse is finally opening their Downtown Brooklyn location today and our video editor Alec and I got to take an early tour of this awesome new theater!

Walking through the lobby with an Overlook Hotel carpet and a King Kong-themed photo background (Empire State Building and Fay Wray included), it’s easy to see why there’s been so much buzz for the space opening. It’s gorgeous and considering how I’ve gotten used to watching movies on my laptop Alamo Drafthouse feels like a fancy splurge that’s worth it. Watching movies in theaters is expensive! Our first stop was the House of Wax—a 19th century-esque bar filled with death masks, famous faces, anatomical Venus’, and other kind of neat things matched with special cocktails and 39 beers. It reminds me a lot of the Morbid Anatomy Museum, another cool Brooklyn spot, and while some might not find these diseased waxworks the most appetizing sights (don’t worry, you can just grab a bite during the movie), they’re super fascinating and I can picture myself making a stop at the bar just on a regular night.

At the back is a moderately-sized stage for events, which will vary from musical performances, talks, and more. Thanks to a collaboration with Mondo, the location also has plans to sell vinyl music and posters. 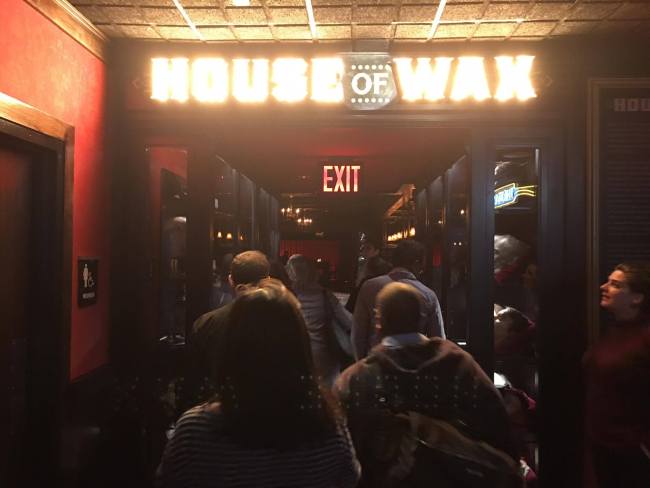 Next, we head upstairs to the theaters themselves, passing all kinds of vintage Turkish movie posters (we’re told they’re going to switch over to Indian posters next) over custom wallpaper that portray old projector parts. We begin in a room that allows for 35mm projection, where Cristina Cacioppo talks to us about the different upcoming programs at Drafthouse. She tells us that their mission is to share all kinds of movies from blockbusters to arthouse film and anything else. Cacioppo introduces programs like Girlie Night, its punkier sister Cherry Bomb, Terror Tuesdays, and other installments. Alamo Drafthouse is really just one big love letter to movies and the lack of film snobbery is a big appeal for the space. Right now, you can go to their website for tickets to Moonlight, The Handmaiden, The Greasy Strangler, and Doctor Strange.

Our tour group makes a stop at a bustling kitchen (they’re about to have their first screening), and I am in everybody’s way. There’s even more beer and a menu as diverse as New York City with selections like edamame hummus and jerk chicken sandwiches. 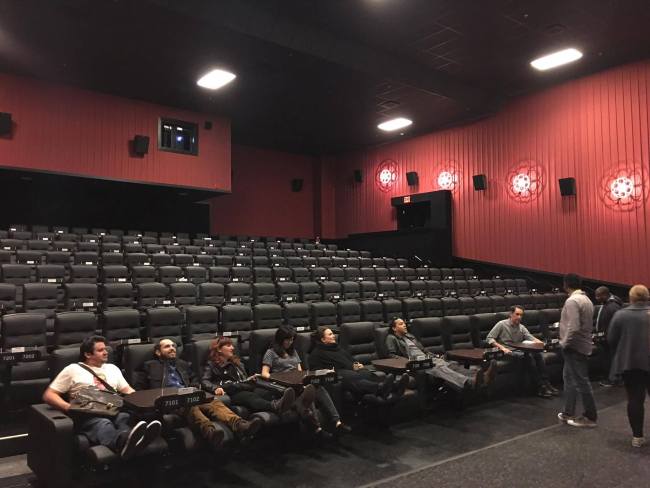 Our final stop is the largest theater, where we watch one of Drafthouse’s new iconic Don’t Talk PSA’s, this one from Janeane Garofalo. (I just found out there’s also a new Moana one too that’s ridiculously adorable.) In an effort to make sure all there’s not a bad seat in the house, the front row seats all recline for a comfortable viewing experience. I can vouch that they’re super comfy and will probably even try to grab one in the future to avoid movie-theater-knee! Founder Tim League, after introducing us to the space, tells us he’s keeping away from Star Wars stuff before we all watch the Rogue One trailer which wonderfully shows off how great the sound system is.

We left with some cool goodie-bags and copious amounts of film-nerd excitement.

Thanks @alamonyc for the coolest Christmas sweater + other neat things

Drafthouse will no doubt become a regular stop for New York movie lovers and you can buy tickets online here. I’ll catch you on Cherry Bomb night!