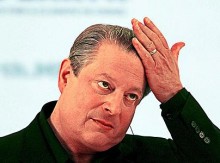 In reporting on Al and Tipper Gore‘s decision to separate after 40 years of marriage, CNN.com gave readers rather more information than they might have bargained for: They enclosed a PDF containing the email Gore sent to his friends. According to WebNewser, while Gore’s email address was blacked out in the PDF, clicking on the blacked-out bar opened the user’s email client and revealed the address he had used to send the note to friends.

CNN has since fixed the PDF bug, but damage may still have been done: Their story on the Gores’ separation is currently the most popular story on the site, and even a fairly small clickthrough rate could have given a nontrivial number of readers access to the former Vice President’s contact information.

This is surely the least Gore has had to worry about on a day that’s exposed his and his wife’s private decision to many millions of people, not all of whom have responded graciously. But it’s a small, though accidental, addition of insult to injury.

The email, bug-free, below, via WebNewser: