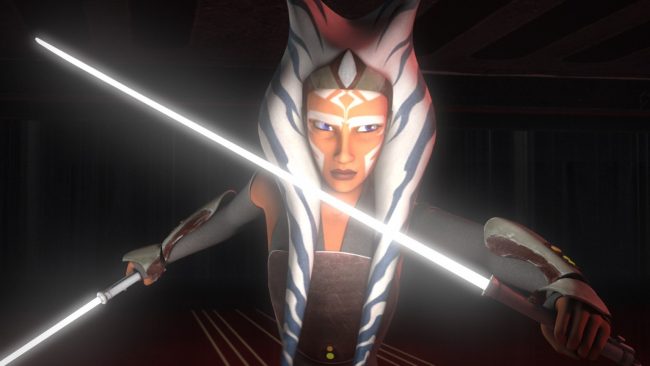 SPOILERS: From a certain point of view, Ahsoka Tano is both dead and alive and there is no better narrative outcome for her.

The former apprentice of Anakin Skywalker is dead and alive.

At the 2017 Star Wars Celebration, The Clone Wars and Star Wars Rebels creator Dave Filoni emerged with an “Ahsoka Lives!” T-shirt in response to a question regarding Ahsoka’s ambiguous fate on Malachor at Darth Vader’s hands. It provoked whoops of joy, but the confirmation by T-shirt didn’t deliver anything new. Filoni really didn’t spoil anything. But the cheers denote the prevalent doubts about Ahsoka’s status.

In March 2016, the Rebels season 2 finale already provided this visual that could be easy to miss through the sweep-through of the montage: Ahsoka slinking into darkness on the Sith realm of Malachor.

It was natural to fear for the life of Ahsoka at the moment Darth Vader, who contained the identity of the man who once trained her, detected her presence in “Siege of Lothal.” After all, Ahsoka would never enter visibility in the cinematic live-action Original Trilogy timeline, so a portion of the fandom ran with the conclusion, “She’s doomed.”

When Ahsoka is last seen, Ezra screams for her as the walls of Malachor’s core swallows her in the same room with Darth Vader, his mask cracked open to expose enough of the visage of Anakin Skywalker, before the Temple detonates. With the sweep-through of the aftermath, Vader marches from the ruins of Malachor in a both introspective and perturbing manner. This is the visual punctuation that Vader had done the deed.

But then the following shot subverts the implication by descending into Malachor to fleetingly follow Ahsoka, who does not face the audience. The camera zooms into darkness, but instead of a clearer revelation of her direction, the scene cuts to the Ghost crew staring forward, a visual recognition that Ahsoka would be left behind, in mission and memory.

Predictably, Ahsoka’s “ending” in “Twilight of Apprentice” was the subject of controversy. Were the animators too wishy-washy to kill off a fan favorite and cheapened the climatic impact of the story? Or did her implied survival allow plausible narrative wriggle room for future stories (the legend continues)? A few drawings on trading cards by Filoni hinted at the liminal realm that Ahsoka is wedged in. “You can stare at them for hours and try to figure out what does it mean,” Filoni teased.

And recently, Filoni tweeted a supplementary piece of canon that highlighted Ahsoka’s conversation with the “middle-grounder” Force-user The Bendu, re-invigorating the mystery of her “dead or alive” status and driving the fandom mad.

But despite the suspense surrounding her status, the emphasis on the “lived or died” question does not matter as much as the thematic riddle she faced in her Rebels arc: about whether she could accept the truth of her master’s fate. This was established in the season 2 premiere when she screams, realizing the presence of the dark sider feels familiar, yet she is unwilling to confide in fellow Force-users Ezra Bridger and Kanan Jarrus about the familiarity of the presence. Her denial carries over to “Shroud of Darkness,” when she is assailed by the vision of her former master Anakin Skywalker before he dissolves into the phantom of Darth Vader.

If she is seen living, technically, then how is she also “dead”?

Literally, Ahsoka did survive the revelation of her master’s fate, but her departure does play as a demise within Rebels, since her survival isn’t treated like a flicker of hope for the Ghost crew or a conventional cliffhanger, but rather, an enigma floating out of the protagonists’ reach. The spiritual framing of her exit plays like the passing of a spirit from one world to another, even if it isn’t the literal case, and the clarity of this new world is withheld from the audience’s view. For all we know, Ahsoka could be wandering down an infinite tunnel with yet to see a light at the end.

(To acknowledge floating theories, some might invoke Ahsoka’s survival as attributed to her connection to The Daughter of the Mortis arc in The Clone Wars and the motif of the owl-like Conover creatures associated with both Ahsoka and the Daughter, but I’m not here to factor in this theory, which may or may not have bearing on Ahsoka’s story).

As Ahsoka roams the limbo between life and death, between the certainty and uncertainty of the viewers, she is perhaps loitering in her doubt of Anakin and Vader. By swearing to stay with her former master when seeing a fragment of his visage, she achieved a semblance of closure. She confronts Anakin and Vader’s duality, restoring her faith that Anakin is still there—although Anakin’s progeny will be the one to succeed in Anakin’s redemption where Ahsoka failed—while remaining conscious that her teacher had dissolved into a monster. Yet, it is a point of contention whether Anakin really did plead for her from the trappings of his mask or lured her into a trap toward death. Both audience and Ahsoka remain down in the dark.

Ahsoka’s descent in Rebels parallels her departure from The Clone Wars in the sunset, when she turns her back from the Jedi Order after losing faith in the virtues of Jedi masters. Her conflicted denunciation of the Jedi title, while remaining a lightsaber-wielding light sider, situates her in a liminal station, where she simultaneously belongs, while the same time, not. She had lived her life in the betweens of decisions and revelations.

Although the cancelation of The Clone Wars erased her future arcs (with some of the story remnants retrieved for the E.K. Johnson Ahsoka novel), the sunset imagery defines her resolution to her arc as a Jedi and her exploration of the unknown. When she sunk away from the Temple, she never rose again in the story of The Clone Wars. 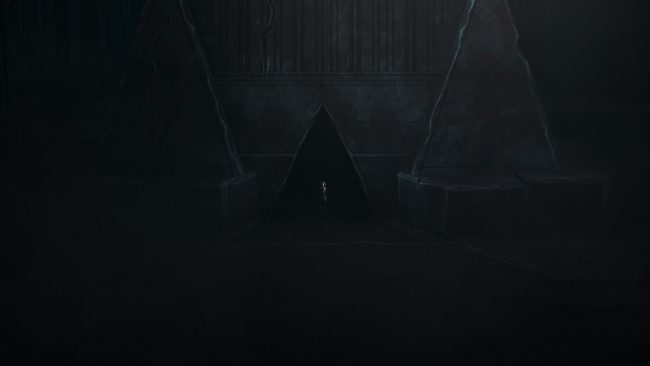 But if she had risen in Rebels after abdicating her presence in Clone Wars, Ahsoka Tano will rise again in another story. But even if Ahsoka never emerges from the abyss, it is natural that this light side warrior would leave behind a legacy of ellipses, in which we will answer by dreaming of her in a perpetual wander.

Caroline Cao is a queer Vietnamese-Houstonian Earthling surviving under the fickle weather of New York while buried in her Non-Fiction MFA homework like Hermione Granger and her Hogwarts studies. When not angsting over her first poetry manuscript or a pilot screenplay about space samurais, Carol is cooking her own Chinese food instead of buying take-outs, directing her first play at the Duke Theater, and dreaming of winning Hamilton lotto tickets.

She chronicles the quirks of New York living, runs writing and scripting services, and lends her voice to Birth Movies Death and The Script Lab. She’s also lurking in the shadows waiting for you to follow her on Twitter or Tumblr and read her Star Wars fanfiction.