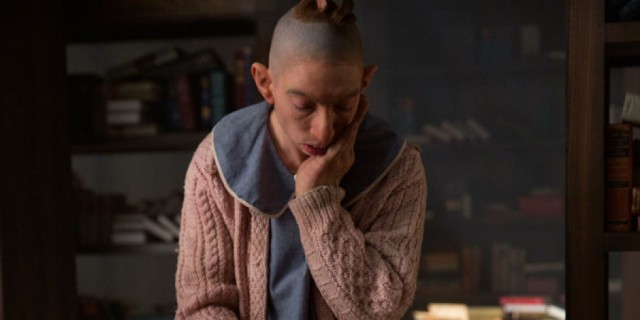 Pepper, the microcephalic “pinhead,” is the first American Horror Story character to ever appear in more than one season. Up until this episode, Pepper (a veteran of what I consider AHS’ finest season, Asylum) functioned as little more than an extra in Freak Show. You could basically pretend it was a completely different Pepper and still keep the seasons separate in your mind.

This was the episode that totally destroyed that possibility – and I’ll explain later why I think that’s a possibly fatal mistake for the American Horror Story franchise.

At the beginning of “Orphans,” Pepper is despondent. Her soulmate, fellow condiment-named microcephalic Salty, has died while sleeping. Desiree comforts Pepper by reading her The Velveteen Rabbit, and I think you can extrapolate some interesting symbolism from that choice. Just like the stuffed toy of the story becomes real, the members of the freak show – some of whom have been treated quite literally like playthings in previous stations in life – have the realness of their lives validated once in a community of their kind.

Stanley, never one to let a tragic moment go un-profited from, is still hanging around, angling to get his hands on Salty’s body. He’s still doing this despite already having sent Ma Petite to the American Morbidity Museum. This season has shown a galling willingness to recycle plots; first Jimmy gets framed for a murder just like Meep did, and now Stanley’s arc seems to be self-perpetuating.

So how did Pepper end up at the freak show in the first place? We have to go back to Elsa’s origins for that. Not back to her days in Berlin, but after she first arrived in the U.S., in 1936. She was working as a backup dancer in a circus, but yearned to lead her own troupe.

She hits upon the idea of the freak show (the show kind of acts like she invented the idea, which is silly) and heads to an orphanage to find performers. It turns out that Pepper was Elsa’s first “monster,” as she calls them.

For reasons that aren’t immediately clear, Elsa then explains how the dearly departed Ma Petite arrived at the freak show as well. A delegation of aristocratic Indians came to meet with Elsa, which is unexplained and baffling – you’d think from this scene that Elsa rules a feudal city-state. They have Ma Petite with them, and they refuse to consider Elsa’s offer to “buy” her, which would really be the only reason I can imagine they would be meeting with her in the first place.

But that’s all before the Indians have experience the sweet, sweet flavor of Dr Pepper. Yes, Ma Petite is ultimately exchanged for three cases of Dr Pepper. In the universe of Freak Show, South Asians are so amazed by soft drinks, in the mid-20th century, that they trade a human for it. Not the finest hour for American Horror Story on the race front.

Pepper was apparently feeling the pull of some maternal instincts, so, we are told, Ma Petite satisfied those. Once again, Ma Petite is treated like a baby just because of her size. We’re told that Pepper and Salty, who were married by this point, raised Ma Petite as their child. Whaaaaaaaaaaaat?

In life, Ma Petite appeared to be Elsa’s personal assistant/manicurist, good friends with Amazon Eve, and kind of background noise the rest of the time. In death, the show has retconned her into a Swiss Army knife of significance to a maddening array of plots. Not only is Jimmy beyond distraught at her demise; not only are we asked to “remember” that she was a huge star in the show to the point of threatening Elsa, even though she’s never shown that way; not only did the highly stoic and jaded Ethel say she became suicidal due to her death; now we are being told that Pepper and Salty – who I can barely recall interacting with Ma Petite at all – were essentially her parents?

We then get another, unrelated origin story flashback, one that explains something that I’ve wondered for a while: How did Stanley and Maggie first join up? It seems that in Kansas City in 1941, Stanley observed Maggie being caught by cops after stealing a coat while pretending to be selling newspapers. He talked her way out of it. That’s it. Not a very interesting story. Sorry I brought it up.

Back to the episode’s main Pepper-centric plot. Pepper is still inconsolable over her husband’s death, so Elsa decides that the right thing to do is to take her away from her adoptive family and bring her to her sister Rita (Mare Winningham), who is obviously an alcoholic, in an abusive relationship, and wants nothing at all to do with Pepper.

Why is this in any way a good idea? Much like the circumstances that led to Ethel’s death by Elsa’s hand, this sequence felt like fitting the square peg of where the show wanted the plot to go into the round hole of the show’s internal logic as previously established.

Well, Pepper had to get to the Briarcliff Asylum somehow. And sure enough, we then fast forward 10 years, to when Rita has brought Pepper there. All of sudden she’s talking to Sister Mary Eunice (Lily Rabe), the mousey-turned-monstrous (thanks to Satanic possession) nun from Asylum. You better believe this made me feel a pang of painful nostalgia for that genius season.

What made the series so brilliant was precisely that the seasons weren’t connected – freeing the writers to create a self-contained story each year and being free to explore any corner of the vast-but-underrepresented-on-TV horror genre. I think eschewing that sets a very, very perilous precedent for this show.

And for what? So that the show’s makers can pretend that some overarching secret or theme connects the entire franchise? The chances that they have really thought that out is about the same as Assassin’s Creed: Summer of Love being a real game. That they feel that it’s worthwhile to have the franchise fold back in on itself instead of always charging ahead does not augur well for the series at all. So I’m desperately hoping this is a one-time anomaly.

Okay, rant over. The details of how Pepper ended up locked away in Briarcliff are quickly explained: Rita had a baby (that was “deformed” in some unexplained way); Pepper took care of him; Rita and her husband didn’t really want him; they killed him and blamed Pepper.

Mary Eunice is disgusted with Pepper at first, but abruptly decides that she sees real remorse in her eyes, and takes pity on her. She gives Pepper a job organizing magazines in the asylum library. Pepper looks at the cover of a Life Magazine from 1958, and who is on it but… Elsa. “TV’s Elsa Mars: She still owns Friday night,” it reads.

I’ve been pretty hard on the show in this recap, so I’ll give it this much: This final image of the episode is definitely a mystifying cliffhanger. Stanley’s promises to Elsa about becoming a TV star are nothing but the work of a con artist; surely his machinations couldn’t somehow actually result in it happening, could they? Does Elsa get so inspired by this idea, disingenuous as it originally was, that she makes it happen herself? Is this just a hallucination in Pepper’s head? I guess we just need to stumble along to the show’s finish line to find out.

– The next episode is titled “Magical Thinking,” and Neil Patrick Harris appears to star as some sort of magician. The show has been extremely light on actually showing the mystery and aura of the freak show performance itself lately, so I’m looking forward to that.

– No Dandy whatsoever in this one. With literally every character in his branch of the story dead but him, I’m not really sure where he’ll go from here.

– American Horror StorGlee seems to not be happening anymore, and I regret that we never got to see Salty and Pepper perform Salt-n-Pepa’s “Push It.” Oh well.