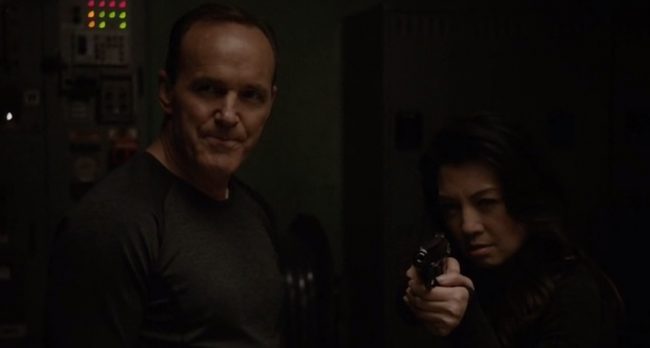 Agents of S.H.I.E.L.D. has been on a real tear lately, and they’ve been playing their stacked hand with much aplomb. In other words: this season is so good. I’m getting a bit sad that the season will be over soon, but that sadness is tinged with a bit of hope, because Agents has come into its own as a show and as a force to be reckoned with within the Marvel Cinematic Universe.

This episode is no exception to that, as the fallout from everything that happened in the Framework has begun to take its toll on everybody, not the least of whom is Fitz. So, without further ado, how about we get right to it?

So, okay. This penultimate (I’m assuming) episode seems to be the one that ties up a hefty chunk of the loose ends, leaving maybe a small handful for the season finale. It handles these loose ends in a really graceful fashion, I believe, because in a lot of ways, we, too, are just coming out of the Framework, and we’re crash landing in the “real world,” which we haven’t seen for, what, five or six episodes now? And that’s not counting the mid-season break we got between “Self Control” and “What If…”. This is practically a lifetime in television land, and I think Marvel took a lot of risks taking us to another world with the intent of returning to the last—and those risks are paying off big time.

The episode does a great job at reintroducing us to the old concepts and threats that plagued the real world. Life Model Decoy/android versions of all the S.H.I.E.L.D. agents have likely all but burned up the public’s only just newly found trust in the agency. I was reminded just how long the real agent May had been out of commission when Coulson was getting her caught up on current events. May had no idea what took place over the whole LMD arc, and that is a really long hecking time. In fact, some of my more favorite moments of the episode had to do with her trying to find out just what happened between Coulson and LMD May (he confessed his feelings for her), and watching Coulson just awkwardly go all “deer-in-headlights” while she was asking. It was a real, “Aww, Coulson, come on, say something!” moment, you know?

Another great moment is when Jemma is watching Fitz over the security camera. After Fitz and Ophelia (née Aida) are both captured (after SAVING MACK, THANK GOD), Fitz makes it very clear that there’s only room in his heart for one person, and that’s Jemma. Ophelia does not take to this revelation too kindly, and rages out on Fitz because of her heartbreak. Before, he genuinely tried to help her deal with her newfound fear and anxiety (hey, welcome to the human club), and for a moment, it all seemed to be going just fine. Heck, he even convinced her to go save Mack, who was still plugged into the Framework as the base was going underwater. It was a serious superhero moment, and it made Ophelia’s quick rise and tumbling fall right after all the more disappointing (though perhaps predictable). But here, apparently anger is something new to Ophelia, and she embraced that with all of her newly-Inhuman powered might.

One great moment, though, came in the post-credits sequence, where after Talbot and the Army leave HQ, the Darkhold portal from a few episodes back opens up and out comes ol’ fire-top himself, Ghost Rider. Hell yeah.

It’s perhaps incorrect to welcome Ophelia to “the human club” there, because she’s technically an Inhuman. Not only is she an Inhuman, though, she’s, uh… all the Inhumans. Remember all the Inhumans who were being tested on in the Framework? Yeah, that wasn’t just torture. They were finding ways to incorporate that into Ophelia’s new body. She can teleport, she has super strength, she can regenerate (!) and she apparently also has Lincoln’s electric powers. She’s all the Inhumans rolled into one, and I think simply knowing that she can regenerate from gunshot wounds kind of tips Marvel’s hands as to how they’re going to handle her (hey, what an opportune time for Ghost Rider to come back).

Anton Ivanov having plenty of LMD clones lying around seems like a very interesting premise, if only because wow that’s a lot of muscle for the agents to burn through. His head is still alive somewhere, and he doesn’t tell Ophelia where he’s hidden it, and my guess is that whatever they took out of the oil rig base before it blew up is what’s enabling him to create more.

That reminds me: the Looking Glass machine (the thing that gave Ophelia her body) was still in the base as it was being destroyed. So much for all those guesses I made about possibly getting some Framework-only past pals back on the show. Womp womp.

What was up with that scene between Anton and Ophelia? Like, I know Ophelia’s heartbroken, and Anton’s basically coming on to her like every other opportunistic bar-inhabiting sack of meat. But then it just felt a little … odd, maybe, to see Ophelia basically jump the guy’s bones and straight up slam his head into the floor. Like, don’t get me wrong, that’s exactly what I expected Ophelia would do to the guy, it just felt like, “Hey, let’s have some obligatory sexytimes things here.” Maybe I’m just a prude, I don’t know.

Finding out later that Anton took a hammer to Director Mace’s body just makes me feel even more sad for Mace. Like I said in our recap for “No Regrets,” I truly believe Mace deserved so much more than to die in the Framework. It was a real heartbreaker to see him go like that, and to learn after the fact that his body was brutalized and mangled off-screen somewhere just makes me even more bummed out. Like, I get it, they did it to make it look like Daisy/Quake killed Mace (while also blowing up HQ), but… yeah. It’s just sad. I hope they find some proper way of sending the guy off at the end of all this.

Oh, and that shot of Mace’s framed photo of him “saving” that person from the falling building (which was, itself, crushed under some rubble)? Real gut check there.