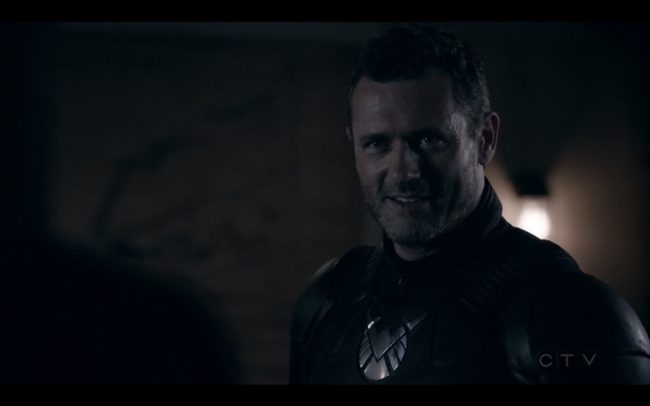 Just … just, wow, that episode. I just finished watching it not 10 minutes ago (as of this writing), and I’m still floored by it. Let’s … let’s just get right to it, huh?

(Oh, and note: I’m trying out some new formats for this recap. Let me know what you think/if you’d prefer the older, longer way I’d been doing it before.)

From the start, this episode promises some pretty solid Inhuman Mace/Patriot action. As the earlier parts of the season played on, I couldn’t help but feel that Director Mace never really got a fair shake. The guy was obviously someone who meant well, though he proved to be a bit hapless in a fight thanks to his not-actually-Inhuman-status, but you could tell the guy was, well, a good guy.

Here, in this Hydra-centric reality, that point’s really driven home as he’s essentially the Phil Coulson and Captain America of this world all rolled into one. Given the way people talk about him and his obvious charisma as a leader in this world, I feel like this is the Mace people were looking for in “the real world.” That says a lot about how Mace’s “changed decision” within the Framework reflects his attitude towards the real world: even in a world where he’s his idealized self, he’s still working to protect other people. Again: good guy.

Even looking at his discussion with Simmons and Ward about “the other reality,” it becomes very clear that many folks kind of wrote him off as a nuisance or an overbearing Director, when in fact, hey, he’s human, too. When he started talking about his home life, I couldn’t help but wonder if anything like that was ever shared over the past 17 or so episodes, and nope, not really. There was a real regret in his voice about the fact that even if Simmons was telling the truth, then he knows they’re not necessarily friends outside of the Framework.

It’s a total treat watching Mack hang out with his daughter. They’re adorable together, and I have no idea how Mack is going to handle leaving the Framework—that is, if he ever decides to. This makes me wonder: will everyone remember everything they’ve done in the Framework? Earlier episodes with Radcliffe have shown that yes, there’s memory retention and everything, so what I’m curious about are the effects this entire arc will have on every one of the agents. Like, this end-of-season arc has been seriously something extra with how heavy it’s been, and I honestly worry that nobody’s going to come out of this with any semblance of stability. The things they’re doing—or the things they’ve been forced to do—are so beyond the pale that I don’t know if anyone can/will ever get back to “normal,” or whatever passes for that in the Marvel universe.

Also: Trip’s back. Can you hecking believe it?! Of all the people I never expected to see on the show again, Trip was pretty high up on the list. But there he was, getting rescued by Mace and crew from the Hydra detention center, decidedly not disintegrated into bits thanks to a terrigenesis cloud. God, it really feels like this season is pulling out all the stops and stomping on everyone’s memories of the past few seasons, isn’t it?

Speaking of memories, how about that really “beat-you-over-the-head-with-it” line that Fitz said after Daisy resisted caving in to torture? “Beaten within an inch of her life … nevertheless, she persisted.” Like, I’m down with that attitude, the gesture, and the meaning behind it and all, but it felt maybe a bit forced in this context? Maybe I’m just being oversensitive. That’s probably it.

That seems like as good a segue as any into …

Fitz, what the hell. The end of the last episode saw our sweet Fitzinnamon roll shooting Agnes (the “real,” yet Framework Agnes who was uploaded before she died in the real world) in cold blood. Whatever happened to Fitz in the Framework world was enough to eliminate even his most basic sense of, well, decency. That much was obvious when he was so cold and neutral in “testing” on Inhumans, but there it was really driven home.

As it turns out, it was Fitz’s father who made him into the man he is today (in the Framework). Of course, as luck would have it, Fitz’s father is also a renowned , Hydra figurehead. (Note: I may be mistaken about the “Death Eater” joke there, as David O’Hara, the actor who I think was playing Fitz’s father, doesn’t have a listing for Agents of S.H.I.E.L.D., so there, I guess.)

We already knew Fitz’s dad was a bit of a jerk. Remember, Fitz was dealing with some issues in the real world pre-Framework, and his father came up as someone he doesn’t really like. Judging by how he is in the Framework, I don’t blame Fitz, not one bit.

I kind of don’t like how the Hydra May falls a bit flat for me, as a character. She’s obviously super dedicated to Hydra here and everything (much like how she’s super dedicated to S.H.I.E.L.D., I guess), but here it comes off really one-note. Whereas everyone has even a bit of depth in their Framework lives, Hydra May just feels like an automaton robot. I guess that says a lot about “the real May” vs “Hydra May,” though. This episode, though, felt like a good chance for her to add some complexity to her character, as her “giving Hydra 150% of everything I’ve got” attitude faltered a bit in the climax of the episode—and really, not a moment too soon.

Which brings us to …

Look, I knew at some point that Mace might not make it through the season. I had a gut feeling that he wasn’t going to last, but I didn’t really ever expect that they’d actually kill him. Reassign him somewhere else, sure. Make him retire, yeah. But killing him in the Framework?! The thought of it haunts me, truth be told. I’m having a hard time shaking that post-credits sequence with him still plugged into the machine and his vitals flatlining.

Like, yes, the episode is named “No Regrets” and all, and that honestly feels like that’s exactly how Framework Mace wanted to go out: saving a kid and his team from Hydra. (I should also stop saying “Framework Mace/May/whatever” because that’s actually them.) But for him to die never really knowing about his real life … gosh, the existential crisis wave is just pounding on me right now. His speech to Simmons about everything in the Framework being real to him and everyone he’s known within it becomes all the more eerily poignant in its wording and delivery. Yes, his feelings that have been brought about by the Framework are real. Yes, the Framework is still a simulation. Yes, they’re all being gaslit in one way or another, whether that be by internal or external influences. And ultimately, yes, dying in the Framework means you die for real. He sure was right about that.

Personally speaking (what, like this whole recap isn’t personal), I think Mace—the “real” Mace, the Mace outside of the Framework—deserved better than to die in what amounts to a video game simulation. His moment within the Framework was absolutely heroic, poignant, and emotional in more than a few ways. (Take, for example, the fact that he died doing what he lied about doing in real life, which was saving people from an actual collapsing building.)

But to have that heroic act end up being “only a simulation” is heartbreaking—which, I’m guessing, was exactly what the writers of this episode were going for. Mace dreamt of dying after a valiant, heroic sacrifice, but the truth is, he went brain dead on a cold table, plugged into a machine. Sure, his sacrifice made sure that Coulson, Simmons, and May didn’t die, too, but … man, I don’t know. Like I said at the beginning of the post, this episode’s got me feeling some kind of way about death and decisions and existence in general.

Thanks for the feelings, Agents of S.H.I.E.L.D.. Welcome back to being my most anticipated show of the week.

I need a drink.