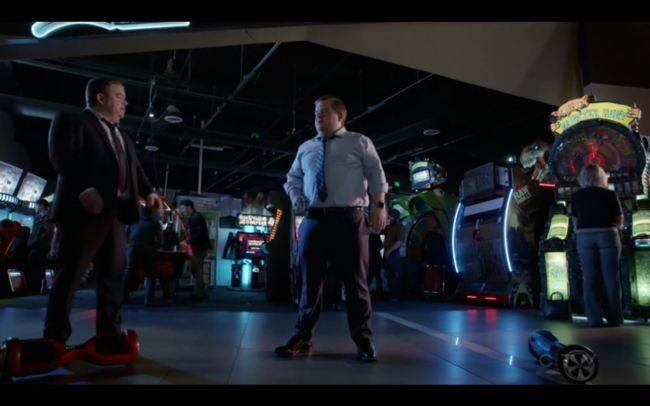 Howdy, Agents, and welcome to another installment of our Agents of S.H.I.E.L.D. recap series!

Last episode, we left Agent May in Radcliffe’s strange dreamland, where he has her re-living the Bahrain mission where she earned her nickname, “The Cavalry”. This time, though, Radcliffe’s got her solidly trapped by allowing her to save the little girl at the center of the entire mission, as opposed to being forced to kill her as she did in real life.

Also, everyone’s a Life Model Decoy. I don’t care if Radcliffe or Aida or anybody said there’s only one. Everybody’s an LMD until I see proof otherwise. We’re going full Battlestar Galactica here, people, and everyone is Cylons. You’re a Cylon, too.

Oh yeah, that reminds me: spoilers. It’s a recap. I don’t know what you’re doing here if you expect your recaps to be spoiler-free. This thing is just full of spoilers. Maybe stop reading if you don’t want to be spoiled. Cool.

The return of the Agents Koenig is a welcome sight, as Patton Oswalt’s comedic relief is certainly welcome in what has otherwise been a pretty dour second half of the season. Watching everyone betray everyone else (intentionally or otherwise) and knowing May’s being psychologically tortured in what I consider truly horrific fashion has begun to wear on my own psyche, and I’ve been looking for a bit of fresh air. (Though Yo-Yo and Mack’s relationship has been *Italian chef kiss*.)

There’s some real spy game stuff going on, though, as the search for the Darkhold continues. After one of the Koenigs (Billy) was captured, Coulson revealed that he played a bit of a shell game with the Darkhold, giving it to him. Given how hard it is to track down the Koenigs, it seemed like a good move on Coulson’s part… at least, up until now. The captured Koenig totally gets The Recruit-ed as Radcliffe pretends to be a captured agent also, hoping he’d give up the location.

Not so, unfortunately, as the cartoony-villain Russian captain of the submarine they’re on nearly goes full body horror and almost cuts Koenig’s eye open. Well, gee. So much for comedic relief.

Also, where there are two Koenigs, there are also now two Radcliffes. At the end of the last episode, it was revealed that S.H.I.E.L.D. didn’t capture Radcliffe—they captured an LMD Radcliffe. Fitz, Simmons, and Mack are all working together to extract whatever information they can from the LMD Radcliffe, hoping they can figure out where Radcliffe is.

The entire episode revolves around interrogation, really. Everybody’s trying to find somebody else. How each party deals with their suspect or target, though, varies wildly. The Watchdogs and Radcliffe are after the Darkhold, and aren’t afraid to resort to Radcliffe’s creepy mind machine to try to extract that information from Billy. Fitz, Simmons, and Mack are kind of on the opposite side of the same coin, and are trying to hack into LMD Radcliffe’s programming to find the real Radcliffe, and LMD May is trying to find the Darkhold while maintaining her cover, as per her programming and all.

Everybody’s more or less after the same thing, and as the episode continues, weird little wrinkles keep popping up. For instance, Sam Koenig (the un-captured Koenig brother) seems to have mixed up which brother he is, blaming “Sam” (read: Billy) for abandoning him in the arcade at the show’s opening. Then, midway through the episode, LMD Radcliffe drops a major plot bomb: he says he knows Fitz’s father. Fitz doesn’t take kindly to this revelation, as apparently he and his father didn’t have the best of relationships. Combine that with the fact that Radcliffe felt like a proxy father to Fitz, and you can really see the tap dance that LMD Radcliffe is performing all over Fitz’s poor heart.

I just want to give him a hug, dammit. The poor boy.

After Radcliffe hacks into Koenig’s memories, he finds out that they captured the wrong Koenig… or something. As Sam explains on the Zephyr, Coulson gave the Darkhold to Billy who gave it to Sam who gave it to… another Koenig. But not just any Koenig: Special Agent LT Koenig, the “original” Koenig. (There are so many Koenigs.)

In fact, they track down LT Koenig to a really weird beatnik bar. As Quake and Agent Davis (introduced in the beginning of the episode) are searching for him, LMD May has a chat with Coulson in the stakeout van. She, uh… puts the moves on him, and just as they’re about to kiss, Quake ends up calling them into the bar. There’s a Koenig on stage, doing a beat poetry set on conspiracy theories and “sheeple” which sounds like an impression of Alex Jones or something. It’s painful. It’s bad. It’s Oswalt doing a wonderful “ranty nerd” impression.

But Agent Davis is jumped from behind by a woman who begins to question why the Agents are there. The Koenig on stage comes down and starts getting angry, and as Coulson and LMD May enter the bar, he begins to protest chant “Hey hey, ho ho, S.H.I.E.L.D. stormtroopers have got to go!” Yeah, I know. The woman shoots him with an icer, and reveals herself to be the actual LT Koenig. (I told you, Koenigs everywhere. Moreso than the LMDs. Now we’re all Koenigs.)

LT says that she actually doesn’t have the Darkhold… she gave it back to Billy, who put it in the Labyrinth, a very aptly-named S.H.I.E.L.D. storage vault. Hell of a shell game, am I right? Radcliffe’s already ahead of them, though, as Billy’s memories reveal where the Labyrinth is (a library) and what the code is to enter it (keypad conveniently hidden in a fake copy of Ulysses, because literary references are too irresistible, even if they’re poor OpSec).

While Coulson and crew are basically on a collision course for Radcliffe and the Watchdogs, Simmons goes to talk to Fitz about his father issues. An earlier conversation between Simmons and Mack told us that their relationship was more or less… uh, complicated. Despite having all of S.H.I.E.L.D.’s surveillance resources at his fingertips, he never wanted to find his father.

Simmons gives Fitz a pep talk. Fitz is stuck in a bit of a loop, re-living all the betrayal of all the role models he’s had in his life: his father, Radcliffe, even Ward. He begins to wonder whether he should put up his own “firewalls” and just stop opening up to everybody. (I can relate, buddy.) He’s on the verge of getting very cynical and jaded about things, despondent over the fact that he seems to just keep getting betrayed. Simmons, though, says that she fell in love with him because he’s so loyal and open and willing to be vulnerable. She says that who he is isn’t programming, it’s something “way beyond that”—which is enough to trigger an idea in Fitz’s head.

Which, of course, leads him back to LMD Radcliffe’s head, where (after interrupting a “conversation” between LMD Radcliffe and Mack about souls) he finds out that LMD Radcliffe isn’t just run by programming—he’s got the weird light brain that Aida was working on back during the first half of the season. Yikes.

As they’re probing around in his brain, LMD Radcliffe lets slip that there’s more than one brain, which helps Simmons figure out that LMD May is, well, an LMD.

LMD May, by the way, is along with Coulson and crew as they head to the Labyrinth to retrieve the Darkhold. As Koenig goes in to retrieve it, LMD May and Coulson share a moment. Coulson, ever the nerd, says he wishes he had time to go to Ireland and read Ulysses in Irish pubs. LMD May says they should go together, and they share the briefest of kisses. (FX: Awwwwww.) LT Koenig interrupts, saying that the hostage takers have arrived with Billy. Sam comes out of the Labyrinth with the Darkhold and hands it… to LMD May.

As Coulson asks for the book, LMD May says she can’t. She pulls a gun on Coulson, who is somehow both surprised and not surprised at the development. He pieces it all together once LMD May says she can’t hand him the book. He figures out that she’s not programmed to do that, and he asks how long ago she was switched out. LMD May is still squarely of the mind that she’s the real May (“Her memories, her thoughts, her desires, that’s all real.”), and Coulson—undoubtedly feeling very played right now—isn’t happy, though there isn’t much he can do with a gun pointed at him.

Quake steps in to save him though, mentioning that Simmons got on the line to tell them the news about LMD May, who drops the Darkhold, which is recovered by Coulson. There’s a scuffle as the Watchdogs square off against LT Koenig (who can kick some serious ass) and the other Agents. Billy ends up recovering the Darkhold after a bluff play by Coulson to get him free, but unfortunately he runs into LMD May (who he doesn’t know is an LMD). She knocks him out and in steps Radcliffe to pick up the book.

LMD May asks him to take her away from there, but Radcliffe, cold-blooded as ever, refuses, saying she “wasn’t built to last,” leaving her behind.

Despite the Darkhold being in Radcliffe’s possession, the Agents go home with every Koenig recovered, plus their mole (LMD May) captured. They also now have a solid connection between Senator Nadeer and “The Superior”, the Russian Watchdog submarine captain cartoon villain guy. They can now work on taking down both the Senator and the Watchdogs while also trying to root out the Darkhold and Radcliffe.

At HQ, the agents watch as LMD Radcliffe and the remnants of Aida are destroyed in a fire. It’s kind of a creepy scene, all of them standing outside the incinerator watching them burn. LMD May, though, is being kept alive, as she’s the last link they have to finding the real May.

In the extra scene, Radcliffe, Shockley (the grizzled Watchdog guy), and The Superior are discussing what the Superior meant when he said he knew the reason for all the alien appearances and weirdness happening in the world. As it turns out, The Superior and the Watchdogs all believe that Coulson is the reason to blame for all the superhero shenanigans going on. As you and I and all of us know, Coulson’s been there every step of the way, and has had his hand in every single development within and without the Marvel Universe (sometimes quite literally).

Radcliffe promises to bring The Superior to Coulson, and suddenly we know the trajectory of the last two episodes of this season.