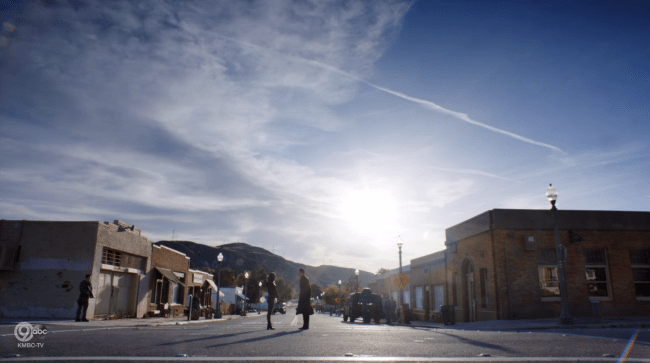 There’s a possibly game-changing MCU film on the horizon, but our SHIELD team doesn’t have time to press pause and set the stage for that. No, they’ve got their own set of small-screen problems that increasingly feel like they’d fit right at home on a big one: Alien invaders, super-powered battles, strained loyalties, and two sides moving ever closer to an explosive confrontation. Bring along your camping gear, team. This one’s intense.

After a brief flashback to Hive’s traumatic origins (I sympathize with Past Him even if I’m mega-creeped by Present Him), we grab the episode’s many plot threads in earnest: FitzSimmons are working on an antitoxin to remove the Hive infection, the rest of SHIELD is planning a targeted strike to kill Hive, and the HiveMind’s new mad scientist is working on a way to recreate the experiments done on the original Inhumans—using live, Hydra test subjects! But Hive’s diluted blood isn’t the same as Kree blood, and the remaining members of Hydra go the way of their Nazi kindred before them.

While Daisy struggles to find a balance between her old SHIELD team and her new HiveMind by simultaneously hoping to turn them Inhuman so she can “make them” understand and promising Hive that she’l tear out their hearts if that doesn’t work, both of her groups move forward with their own plan. May and Mack infiltrate Hive’s ghost town, using resident James to gather intel on where Hive has been spending all his down time. Mack and his squad of likable, doomed redshirts go in…only to find the Kreeball calling down the gorramed Reapers who’ve been orbiting Earth in stasis all these centuries.

Hive sends Daisy on an important mission to get live Kree blood while he faces his own greatest fear. Both whoop a lot of “Papa Smurf” ass and it’s way more fun to watch than it should be given that they’re technically the antagonists or whatever, but y’know what? GET ‘EM DAISY! THROW OFF THOSE SHACKLES, HIVE! GO, TEAM INHUMAN!

May’s squad uses the after-fight lull to riddle our Big Bad with so many holes he’ll have to change his name to Beehive (…yeah, sorry, that one hurt me, too). They even try the ol’ Buffy Rocket Launcher trick, just to be safe. It doesn’t work because Hive has ridiculous regenerative powers…but Brett Dalton did just get shot, so…

On the other, far more heart-stomping side of the story, Mack goes off-mission to find Daisy (and Dr. Radcliffe, who is having a very weird day) in the middle of extracting Kree blood from her dying specimen. Convinced she purposely showed up on SHIELD cameras because a part of her wanted them to rescue her, he tries talking to her. But, since both want to “save” the other and neither feels like they actually need saving (more on this later), the conversation turns nasty, with Daisy taking some (not entirely unfair) shots at the way SHIELD changes its own members into the agents it wants them to be. She accuses Coulson of taking advantage of her, denies that Mack ever had a friendship with either her or Bobbi (not cool, Daisy), and even calls Mack a failure of a big brother (SO not cool, Daisy).

Eventually Mack gives up on talking. He tells her he doesn’t want the world she wants and sabotages her Kree experiment, but he still refuses to fight her. This leads to a very painful (in every sense of the word) fight sequence where Daisy beats the crap out of him and he only makes the barest of efforts to defend himself. AoS knows damn well this is the best relationship on the show, and they are BRUTAL in tearing it to pieces here. It looks like it might even end in Daisy crushing his chest Coulson-to-Ward style (my notes here just say “MAAAAAAAACK” for most of a line), but May arrives in time to get him and their team of somehow-still-living redshirts back to base. And through it all Mack’s eyes are again the eyes of sadness and I… I just… I need to talk about something happier, okay?!

But alas, the Downer Episode continues back at base, where a frustrated, increasingly frantic Lincoln becomes a willing test subject, injects himself with FitzSimmons’s antitoxin, and breaks half the lab’s equipment in the process. 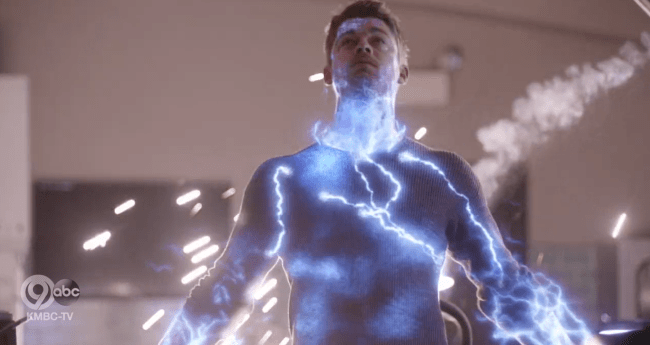 LINCOLN used THUNDERSHOCK! LINCOLN is confused! He hurt himself in his confusion!

The antitoxin temporarily shuts down his immune system, so Simmons locks him up in a containment chamber to keep him safe. Oh, and to put the bitter cherry on the depressing sundae, the antitoxin didn’t even work! So, basically, FitzSimmons spent an episode inventing short-term AIDS, and Lincoln pumped himself full of Hive germs and got his brain drilled for nothing. Man, if the poor guy was feeling useless before, this is not gonna help things.

Oh yeah, and Daisy’s offered to let Hive drain her blood to forward his forced evolution project. Today has been just peachy, hasn’t it? 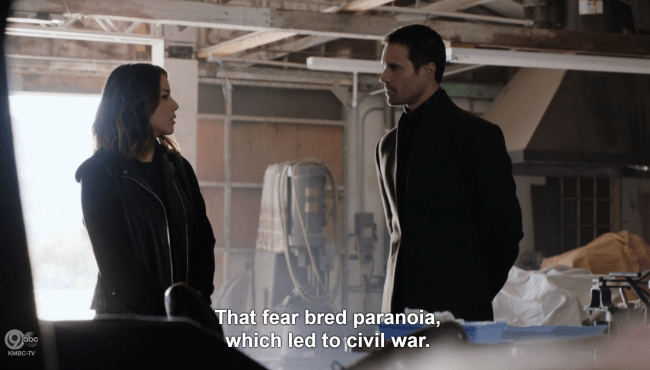 COMING SOON TO A THEATRE NEAR YOU!!

Man, if Civil War is half as riveting as the past couple episodes of AoS have been, it’s going to be a grand old time. The fight sequences were excellently staged (I seriously threw a fist into the air when Daisy owned that Kree Reaper) and the show continued to create excellent tension through uncertainty, particularly where Daisy’s allegiances were concerned. But what really made this episode shine were its character interactions. We’re seeing a lot of season-long arcs bearing emotional fruit now, and it’s made the battles more worrisome and the conversations weightier (and, at times, downright heartbreaking).

I wonder if AoS isn’t setting us up for a pattern here where various (male?) team members take turns trying to get through to Daisy. Last week it was Fitz; this week it was Mack; next week it looks like it might be Lincoln. Are we heading towards a final, Pheels-inducing confrontation between her and Coulson? Or will Mama May, she of the exasperated “okay seriously guys this isn’t about you” have a chance to meet her one-on-one as well, and from a very different perspective? 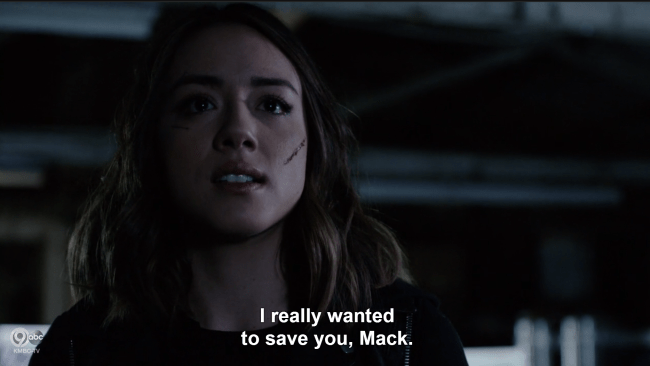 I’m still halfway convinced AoS is playing with season-long ideas about White Knights and Damsels, especially after Daisy sums up the past two seasons as stories of Coulson’s “Team of Misfit Toys” having to “save” her from other, harmful communities. It’s not an entirely accurate summary—Daisy was rarely (if ever) a passive damsel, and she’s certainly done her fair share of rescuing along the way—but that’s not really the point. The point is that she feels that way, meaning that Hive has given her something else: A sense of control and agency, and the feeling that this time she can save others.

Of course, what she’s really trying to do is foist her own ideals (and arguably they aren’t entirely hers) onto others. There’s genuine appeal to Hive’s talk of “equality” and “peace,” and he makes some valid points this week about how the “greed of a few destroys the needs of the many,” and how (super)power is being consolidated into the hands of the wealthy (Tony Stark) and/or the government (Steve Rogers), leaving the majority of the populace feeling like perpetual helpless victims. But there’s a big difference between offering someone power and forcing it upon them, and Hive’s plan feels a whole lot more like a eugenics movement than a people’s revolution.

Daisy’s repeated desire to “make [her SHIELD friends] understand” is also indicative of this lack of acknowledgment of another person’s free will, as is the use of the word “save” from both our groups. “Saving” suggests passivity, or at least an inability to make good choices for oneself. There’s a lack of trust implied that can come across as insulting to the other person, particularly if they’re not actually asking for help. Ultimately Daisy and Mack can’t reach each other because they’re denying the validity of the other’s agency—their desires, feelings, needs, what have you. Mack may very well be right about how Hive is controlling Daisy. And she may have some good points about SHIELD’s own ability to change people, too. But neither is going to get through to the other if they dismiss their feelings as false right off the bat. 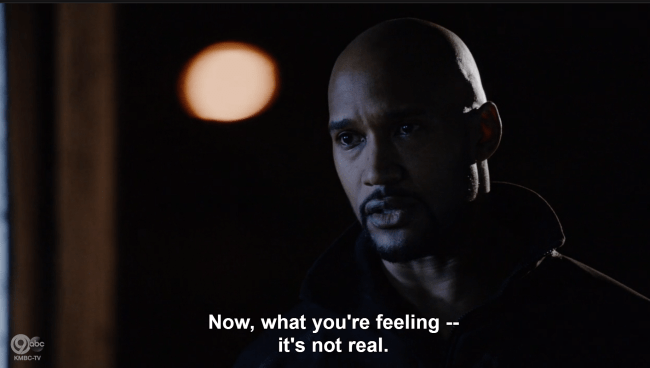 And speaking of Hive’s control of Daisy, credit to the writers for doing some very nice work with the dialogue to show how subtly the HiveMind works. Whenever Hive offers an opinion, by the next scene Daisy is echoing it. He says SHIELD is no better than Hydra and that they “made” Daisy the same way they Kree made him, and suddenly she’s posing those same arguments to Mack.

It reads less like direct mind control and more like quiet emotional manipulation, or even outright gaslighting. (I think it sort of depends on how aware you think Hive is of what he’s doing—like did he really not see Ward’s memory about Daisy’s Kree blood, or did he pretend not to see it so she’d feel like she was volunteering instead of being signed up? I’m not sure myself.) Daisy admires Hive and wants to please him, so she internalizes his opinions, losing a little bit of her initial beliefs along the way. It’s chilling to watch. 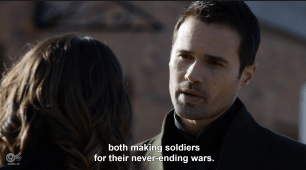 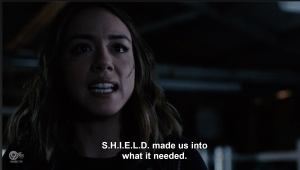 Interestingly, though, there’s also some suggestion that the HiveMind might be a two-way street, as Hive echoes her line about “the greatest miracles happening by accident,” tries to have his own “you should be proud of us instead of trying to destroy us” argument with the Kree, and follows through on her promise to “tear out the hearts” of their enemies quite literally. Granted, it’s possible these ideas were already in his head and he had Daisy vocalize them, but I’m personally fond of the idea that she’s having an influence on him as well, if only because it makes their relationship a much more interesting symbiotic one rather than one-sided control and abuse.

It’s hard to imagine that Daisy will go Full HiveMind forever—but what are our options at this point? Given that AoS has called out the “save Daisy” recurring story lines issue, the show is likely trying to find a way to subvert or avoid it this time around. Is there a line she’ll refuse to cross even if Hive asks it of her? A way for her to break free that doesn’t involve others rescuing her? I suspect that’ll be the main question during our last few episodes, and I am not at all sure how it’s going to be answered. But hey—that’s what makes stories so darn fun.