The Mary Sue Interview: Elizabeth Henstridge Talks Agents of SHIELD and the Importance Of Science 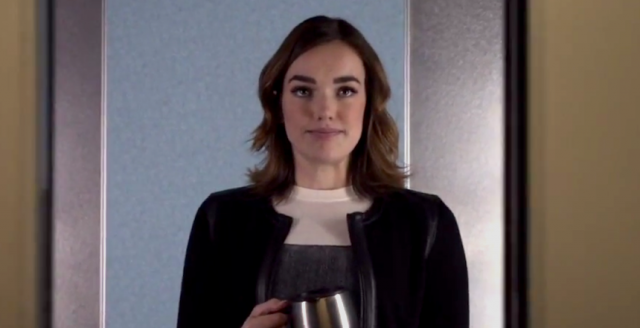 On Tuesday night, the Paley Center for Media in New York hosted a fascinating event called “Cracking the Code: Media Portrayals of Women in Science, Technology, Engineering, and Math.” We’ll let you know what each of the amazing panelists  (including Archer’s Aisha Tyler, Silicon Valley Season 2 writer Carrie Kemper, Paley Center curator David Bushman, and moderator and founder of Girls Who Code, Reshma Saujani) had to say on that topic later this week, but given last night’s exciting Agents of SHIELD‘s midseason finale, it only felt right to give Dr. Jemma Simmons herself the spotlight to talk about her role as a confident female scientist.

While the episode hadn’t yet aired on Monday night when we spoke to Elizabeth Henstridge, we still wanted to pick her brain about this current season of SHIELD. In particular, the actor was excited to talk about her recent work with Adrienne Palicki as Bobbi ‘Mockingbird’ Morse.

“She’s great,” she told the press on the red carpet just before the Paley Center panel began. “Adrienne is such a brilliant actress and just a lovely person. She’s a very strong actor and she does a lot of her own stunts. It was magical to work with her, honestly. We’ve got so many great people and it brings a lot of energy to this season.”

Henstridge also had especially interesting things to say about the relationship between her character and that of Fitz, Dr. Simmon’s counterpart (played by Iain De Caestecker) for most of the first season—though the fans who were hoping for a tidy reunion between the two might be disappointed:

Definitely in season one [Fitz and Simons] were kind of the yin and yang and there wasn’t much conflict between us. We were just a unit. This season’s a little different because of what happened in the finale of Season One, where he confessed his love to me and I didn’t reciprocate it. So there’s a fractured relationship there, and now it’s just about them working through that and whether they want to work through that, if they can be as close as they were—I don’t know. So it’s a fun relationship to play with, and Iain De Caestecker, who plays Fitz, is phenomenal.

But the main focus of the night, of course, was discussing how television might have the opportunity to change public perception of women in science and technology fields—a conversation that Henstridge admitted she found to be very important. Agents of SHIELD’s status as a science fiction show obviously sets it apart from more grounded, alien-bereft programs like CSI or Bones. But as Henstridge told The Mary Sue, this is a good thing for depictions of women in science and beyond, because it gives them more freedom to explore and empower their characters without worrying about what the real world might think.

“I think because we’re in this fantastical world, it gives us the ability to do what other shows can’t do,” she said. “We can introduce strong female superheroes and do it in a metaphorical way, but in a real way too with the characters. So there’s definitely a broader spectrum that we can do, and Marvel utilizes that by having a lot of strong female characters—and male characters, too.”

She also mentioned to the The Mary Sue that while she didn’t set out to become a role model for young women interested in science, it certainly seems like Dr. Simmons has had a positive effect on the many kids who watch SHIELD:

Yeah, it’s not something that I necessarily thought too much about when I took the role. I was excited just for me because I’m drawn to characters like [Simmons]. But we had some girls come to set who won a competition through Disney—like a science competition, they had to submit a project—so I got to speak to them and we hung out for a while. It is creating a positive image of science for young girls, because they told me that it is! So that’s really special and I’m proud to be a part of something that does that.

Henstridge is no stranger to real-life science, either, despite her current career. “I studied the sciences up until going to college and I was either going to do medicine or drama. I chose drama, but I come from a whole line of doctors,” she told TMS (and also mentioned in the panel later that many of those family doctors were women themselves—an added bonus!) “My family’s very medical, so as a field that I think it’s so important and wonderful, something I’m definitely interested in. Just not for a living!”