Agents of SHIELD Recap: "The Inside Man" | The Mary Sue

The con is coming from inside the house! 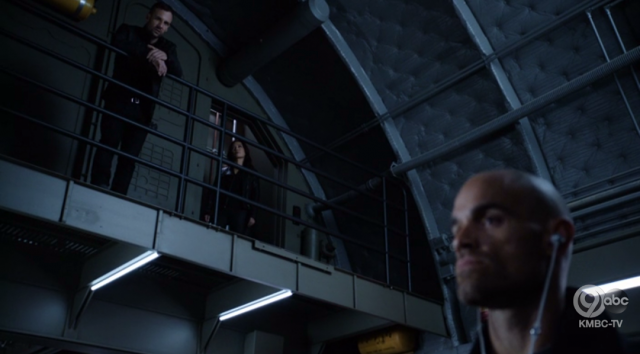 As the world’s leaders begin to take action about the increasing population of Inhumans, SHIELD once again finds itself dealing with more enemies than the obvious one, thanks in large part to its covert, faceless nature making it a difficult organization for others to have faith in—at least until they storm in to save the day, that is. Coulson, you’ve really got to come up with some less dangerous trust exercises.

Coulson and new BFF Glenn Talbot attend a “Symposium on the Alien Contagion” in Taiwan along with five other representatives from around(ish) the world while May, Bobbi, and Hunter sneak into everyone’s rooms to gather intel on Inhumans and figure out which of the representatives is Malick’s “inside man.” I realize a few minutes before Coulson does that the inside man is none other than Talbot himself. Surprise! Malick suddenly shows up at their secure location to give a speech about how cool he is and accuse Coulson of being the leader of HYDRA. Everyone is on board with this.

Talbot has his reasons—Malick’s holding his son hostage—as well as a backup plan involving his new bodyguard, our old skin-changing pal Carl Creel. This will come in handy when Talbot too is double-crossed, because HYDRA. The gang manages to escape and May gets Talbot’s son back safe, but Coulson is now marked as HYDRA and Malick is moving forward with his plan to get the Inhumans all in one location where he definitely won’t force them into his super-powered HYDRA army, no no, certainly not. But hey, on the bright side, Coulson has a new banterin’ buddy! 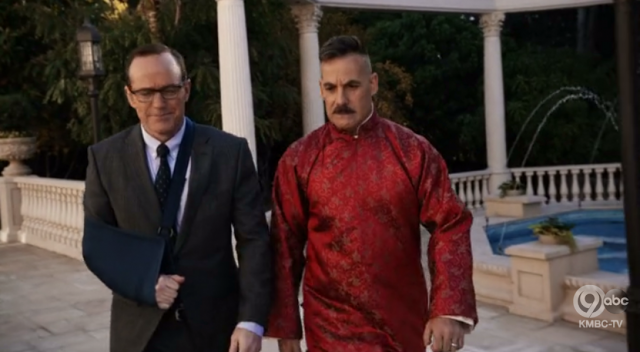 Back at SHIELD base, Daisy and Lincoln take a break from “fighting” to have an actual fight. Turns out there’s something in Creel’s DNA that could prevent terrigenesis from occurring in latent Inhumans. Lincoln is into it, Daisy not so much. We’ll talk about this more in a minute. For now, Good Ol’ Shake ‘n’ Bake (thanks for the couple name, Hunter!) have to suck face. It’s not nearly as interesting as their debate is.

And in the HYDRA bunker, Yeerk!Ward recruits a new follower in Mr. Freeze, then upgrades from Gross Zombie Body to Gross Goo Body by sucking the life, skin, and organs out of a group of captured civilians. Jiaying’s regeneration powers have got nothin’ on this dude. Meanwhile, after being offered up as a new host body and ordered to facilitate the murder of a bunch of innocents, Giyera wonders if it might not be time to reexamine his life choices. 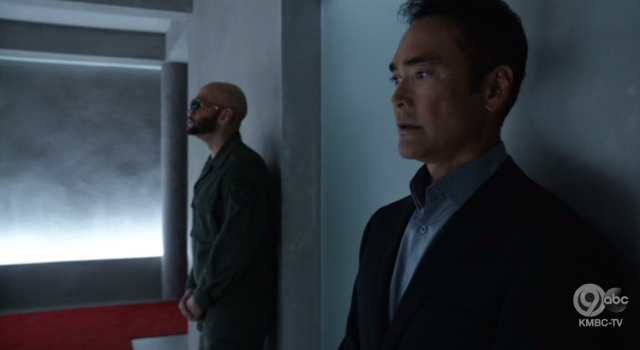 “Could’ve gone to veterinarian school, petted kitties all day, but NOOOO, I just HAD to go into private security …”

Also, Bobbi and Hunter are hiding out in Malick’s plane. You kids and your couples’ vacations.

Some chat-worthy points of interest this week—but first, can we all take a minute to marvel at how much Talbot sucks at his job? I get that he’d be willing to work with Malick for the sake of protecting his kid, but not telling SHIELD (a group that’s saved his ass before, by the way) about the kidnapping or Creel’s rescue mission was all but asking them to be suspicious and intervene (which, oh look, Hunter did), endangering both missions at once.

Add to this his frankly impressive ability to annoy or outright offend every international politician he meets via the magic of casual racism, and you have to wonder if President Ellis didn’t assign him to be the “public face of the Inhumans crisis” out of pure spite. Maybe Talbot insulted his cooking once. Or, yikes, maybe Coulson did. Either way, putting someone who can’t even tactfully handle other human cultures in charge of handling Inhuman relations seems a sure-fire recipe for disaster. Hah. Recipe. Cooking insults. Nailed it. 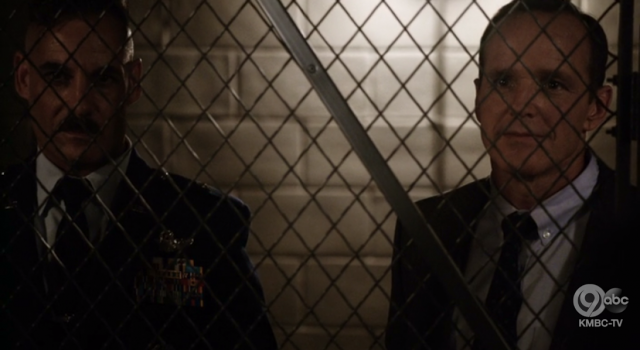 “You told him the brisket was a little dry, too, didn’t you?”

Outside of Talbot’s all-around incompetence and a “let’s be partners” internal conflict that was tied up just a little too quickly and neatly, this was another entertaining, fast-paced field mission with some snappy one-liners and worthwhile talking points. First is a small piece of dialogue that helps explain Talbot’s reticence in trusting Coulson, as well as highlight the fine line SHIELD has been treading this season:

Coulson: “[We suspect Malick has] someone in his pocket trying to influence delegates while getting information about any Inhumans.”

There’s an “ends justify the means” mentality to the SHIELD team, particularly its “official” trainees (Phil, May, Bobbi, even FitzSimmons to an extent), that allows them to make moral compromises the rest of the team struggles with in the name of achieving far-reaching “beneficial” results. We saw this a lot last week with the brain-machine and a little this week with Creel (a decision that fortunately wound up justified), but where it’s especially noticeable is when Yeerk!Ward and Malick also keep talking about how everything they’re doing is for “the greater good.”

I do think SHIELD is trying to serve and protect others while HYDRA is trying to serve and protect itself, but from a distance the two can sometimes look a little too similar, and means matter as much as ends do. Add to this the oh-so-salient point that Malick makes about the importance of one’s public image—people know his reputation, whereas Coulson is just some yahoo off the street (who is also legally dead?)—and it’s no wonder Coulson has a hard time convincing people to trust him. Heck, as May mentioned last week, he’s not even sure he trusts himself.

But that’s just a small section of an ongoing story thread. The main argument this week is the one between Daisy and Lincoln about whether to share the terrigenesis prevention method with others. They frame it as a question of “choice” (Lincoln) versus “birthright” (Daisy), although Daisy pulls back a bit when Lincoln reminds her of Andrew/Lash. I’m inclined to agree with Lincoln (wow, those’re words I never thought I’d say), at least in the abstract. Just because something is in your genes doesn’t mean you shouldn’t have the choice to not have it if you don’t want it. Going bald, to use a fairly benign example, is hereditary, but some people choose to avoid it via artificial methods, and there’s nothing wrong with that. 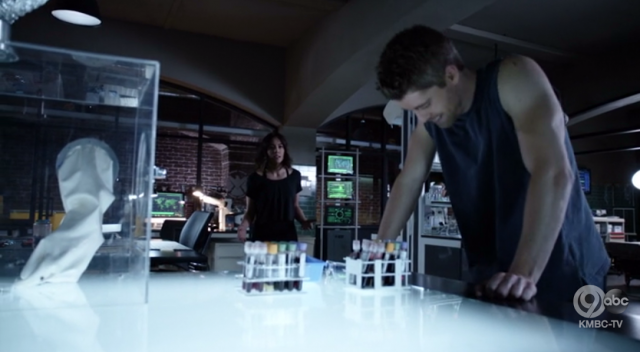 Okay, Lincoln, I GUESS you can stay on AoS, but only if you keep provoking interesting debates.

That said, Daisy has a strong point about how harmful a “vaccine” could be in practical terms, given the current political environment. Pretty much everyone at the symposium talked about Inhumans in fearful or patronizing terms: They’re sick, they’re weapons, they need to be monitored, they need to be put in a “Sanctuary” (in an uninhabited part of Russia, of all climates). If Simmons’s discovery was made public, it’s unlikely the Inhumans would be provided with a choice at all—world leaders would simply declare terrigensis a pandemic and enforce mandatory vaccinations.

It’s a game-changer for certain, and one that could help and hurt people in equal measures. There’s a big ol’ Civil War looming less than two months away, but there’s a decent chance we’ll have our own smaller one within and around SHIELD in the coming weeks. Either way, I doubt we’ve seen the last of this conflict, or the schisms it could create between our agents.