Thanks to the release of Avengers: Age of Ultron, much of the world now understands the same thing I learned as a child: the Vision is cool. One of the first Avengers stories I read was the introduction of this android hero, one who was built by Ultron to destroy the Avengers but then changed sides after being inspired by their heroism. I was fascinated by the Vision quickly; his strange costume, his ability to become ghost-like, and how he tried to act aloof and logical but then excused himself to shed a tear of joy when the Avengers forgave him his past actions and accepted him as a member. What a sensitive android!

The Vision has sported a few looks over the years and he’s not the only odd hero to use that alias. So here’s a fun general overview of things, starting with a certain alien who could be summoned by smoke. 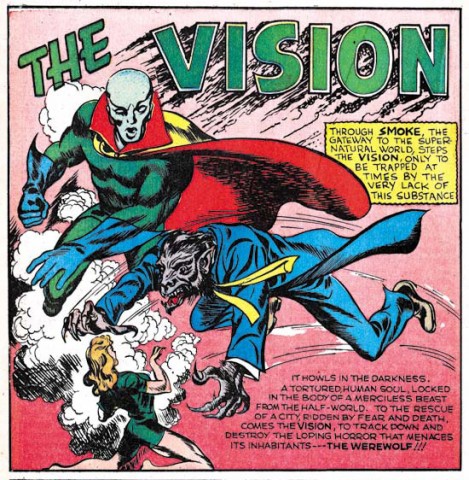 During the Golden Age of Comics (roughly 1933 to 1951), there was no company called Marvel Comics. The title Marvel Comics referred to the first series published by a company called Timely Comics. It would be renamed Atlas and then Marvel in later years. In 1939, Timely Comics introduced the original Human Torch in the pages of Marvel Comics #1. He was an android who could produce (and later control) fire from his body. He’ll come up again later.

The series Marvel Comics was retitled Marvel Mystery Comics starting with issue #2. In issue #13 (1940), we met the first comic book hero to be called the Vision, created by Jack Kirby and Joe Simon, the same team that brought Captain America to life. Unlike the original Human Torch, the original Vision wasn’t an android but a fairly typical sci-fi alien with green skin and a bald head. He would emerge from his home dimension of Smokeworld from time to time, fighting some evil while generally acting weird, then vanish again into smoke. His real name was Aarkus and, along with flight and smoke-based teleportation, he could freeze his enemies and cast illusions. 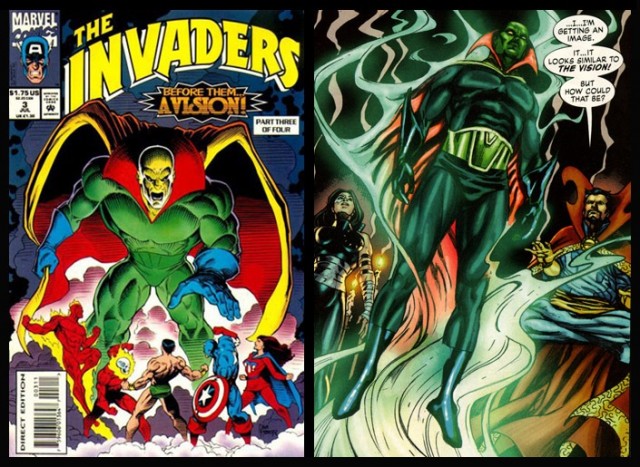 This guy’s costume doesn’t have a lot of flare to it. It’s a green jumpsuit that’s just a bit darker than his skin tone. It’s almost like he was wearing a flesh-tone body stocking. The cape’s not bad, but what’s with that massive weight belt? Seriously, was Aarkus always in the gym when he wound up being summoned to fight evil? In any event, the original Vision vanished from comics after 1943 and wouldn’t appear again until after a certain red-skinned android showed up. 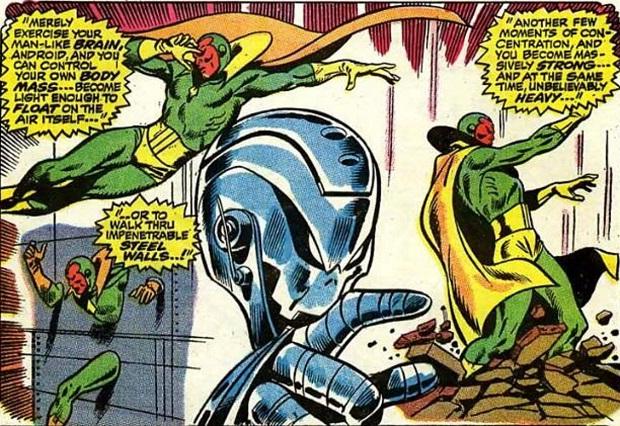 So the Avengers fought this weird villain called the Crimson Cowl, who turned out to be a nasty robot named Ultron, a truly sentient form of artificial intelligence created by Hank Pym. Deciding he hated daddy and needed to destroy his world, Ultron quickly became an enemy of the Avengers and the Fantastic Four. He then decided that he needed to start his new artificial race with a son. With some help, he created the Vision, who debuted in Avengers #57 in 1968. 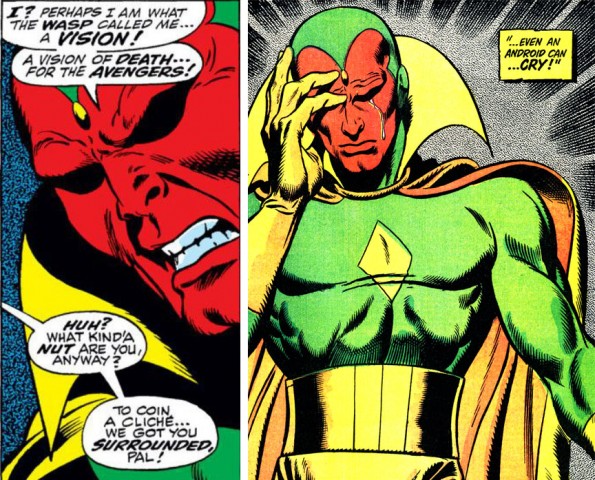 Roy Thomas was writing Avengers at the time and had wanted to bring back the Golden Age character of Aarkus. Then-Editor Stan Lee thought the Vision looked cool, but didn’t care for his powers or origin and told Thomas to come up with a new version of the character. So Thomas thought of a red-skinned android with an updated costume. Roy Thomas made the new version an android created by Ultron, not simply another robot but an artificial man (or “synthezoid”) with synthetic organs, blood and tears. His main power was that he could alter his mass and density. He could shift between intangibility or being strong enough to rival Iron Man.

The Vision’s original outfit fits right in with many cosmic, supernatural characters introduced in comics of the late 1960s and 1970s. He’s got the sorcerer’s style high collar and a simple diamond symbol that echoes the odd gem on his forehead that implies he’s a mystic. In actuality, this is a power unit that helps him absorb solar energy and fire solar radiation beams. Although he was a creature of science, he was meant to seem ghost-like and frightening. He got his name by freaking out the Wasp, who referred to him as a strange, ghostly vision. In a later comic, it was said he chose the name because Wasp had told him to adopt his own identity, his own vision of tomorrow. 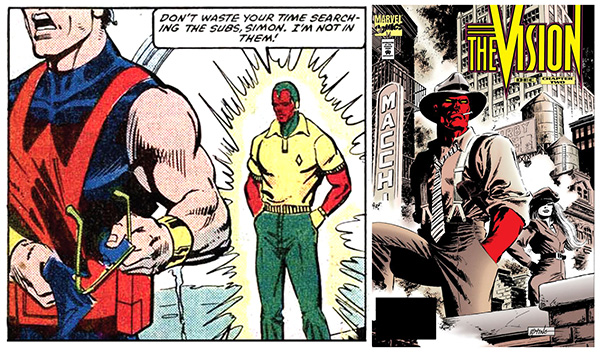 The Vision’s odd appearance also made it rather cute when he tried to pull off casual wear. He was extremely embarrassed in one costume when Wanda Maximoff, the Scarlet Witch, took him to the beach and made him wear a speedo. Isn’t that adorable? Later on, he used holograms sometimes to look like an ordinary human and even came up with the alias “Victor Shade.” But I think the casual wear works great when you leave him as a red-skinned android. I also think it illustrates that he doesn’t really need that odd green headpiece. What do you folks think?

A quick note about the Vision’s origin. Roy Thomas intended to reveal that the Vision was actually the original Human Torch android, rebuilt by Ultron. He left as writer of Avengers before he could do this, but the idea was later revealed to readers by writer Steve Englehart, but years later it was contradicted by writer/artist John Byrne. Later still, writer Kurt Busiek revealed that the Vision had been created from a copy of the Human Torch’s android form. 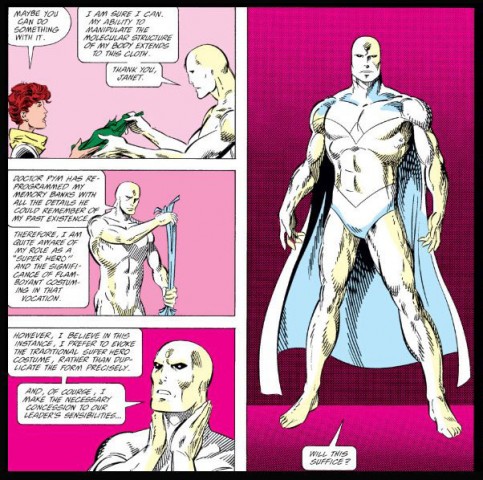 In the 1980s, the Vision had embraced the emotions he had. He married the Scarlet Witch and the two of them even found a way to have kids thanks to magic (aww!). But then writer/artist John Byrne thought this wasn’t right and it would be more interesting if the Vision was a typical, emotionless android. So in the 1989 story “Vision Quest,” he had his personality (based on the brainwaves of Wonder Man) wiped from his mind. He also lost all color.

Before this time, comics had often avoided dressing characters in white because often times you could see through their outfits to the artwork printed on the next page. So the Vision now certainly came off as unique. But while I understand that this still gives him a ghost-like appeal, it’s a bit too much. He doesn’t even have a costume now, just flesh-colored underwear and a flesh-colored cape. I get why some people like this, but I personally miss the imagination of the previous look. 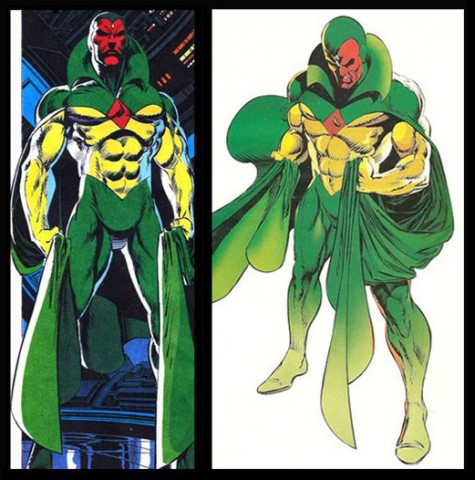 After a few years, the Vision wound up having his mind exchanged with a counterpart from another universe. So our hero woke up in the parallel universe Vision’s form, which was red-skinned and wearing a costume similar to his old one. This was a nice modernization of the old style and he went back to it again during the recent story Axis. 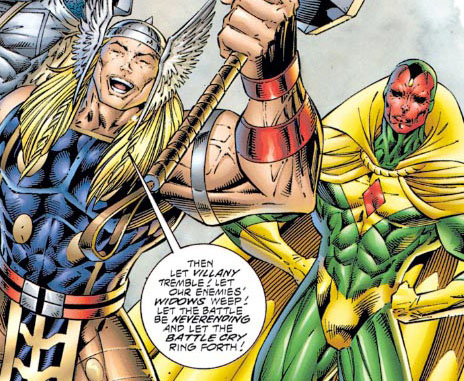 There was also a time where the Vision, along with the rest of the Avengers, wound up on Counter-Earth where they lived altered versions of their own lives and wore somewhat different costumes. This was the event known as Heroes Reborn. It wasn’t terribly memorable. 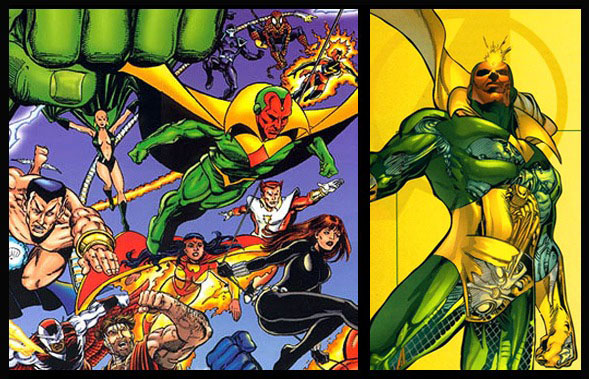 Following this, the Vision and the Avengers all returned to their proper Earth and lives. The android hero now sported a version of his classic look that got rid of the gold shorts and had a very simple belt. He also now started showing circuitry and robotic parts when he used some of his powers. After a few more years, he returned to his original costume. 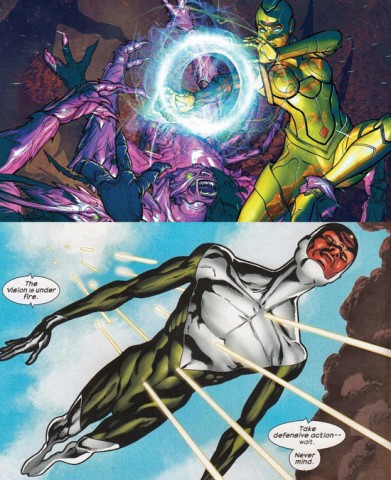 Quick note, over in the universe of Ultimate Marvel, we met three Visions. One was a robot with female form who came to Earth to warn them about a threat coming to their world. She was destroyed and then the Ultimate version of Hank Pym created more generic looking robots based on her, called “Vision II.” Later on, prodigy Robert Mitchell wound up getting similar powers and became the third Vision, with red skin and a green and white suit.

In the story “Avengers Disassembled,” the Vision was destroyed. In 2005, we met Iron Lad, a boy from the future. Iron Lad’s armor wound up merging with the Vision’s programming, creating a new robotic version of the hero. This wasn’t exactly the Vision of old, but a new one with a younger personality who called himself Jonas. Initially, he looked like a combination of Iron Man and Vision, an obviously robotic being. But then he shifted into what is maybe the best update of the classic 1968 costume. It’s got that edge of a sorcerer look, but it’s sleek.

Jonas, however, later died in battle around the same time that the original Vision was finally rebuilt.

In recent years, the Vision has repeatedly caused himself to evolve further, becoming more and more robotic. In the series Avengers A.I., he had a look that resembled Jonas’ sleek design but now had more seams to indicate his robotic nature. I don’t think such details and paneling really add much to the character. And I miss the funky cape collar. 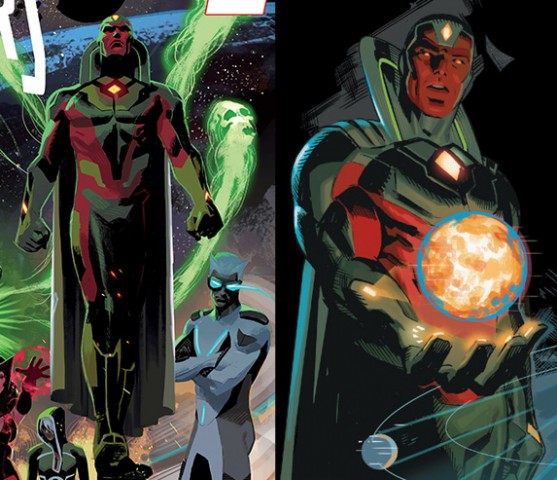 Vision went back to his early 90s look in the crossover Axis. More recently in Uncanny Avengers, Vision has adopted a look that vaguely resembles his design in the movie Avengers: Age of Ultron. This isn’t so much a red-skinned man wearing a costume anymore as it is a being made of different colored pieces. It’s up to you what style you prefer for the android Avenger, but I think going back to a sleeker, Jonas-like look would be nice. I also think it’s a big mistake to lose the gold. There’s something rather lovely about that gold cape giving a regal atmosphere to the otherworldly android.

That wraps it up for now, folks. I hope you enjoyed this journey through the Vision’s apparel. Let us know which design you think looks best!

Alan Sizzler Kistler (@SizzlerKistler) is the author of the New York Times Best Seller Doctor Who: A History. He is an actor, host, comic book historian and geek consultant who has recently relocated from NYC to LA. Archives of his work can be found at: AlanKistler.com