Last week, we looked at the original Venom villain Eddie Brock, and discussed how he was created. Now, we’re going to take a look at the other folks who have worn the name and appearance of “Venom.” Now, it’s true that the living alien costume that turns its hosts into Venom has spawned other symbiotes such as Carnage, Mania and others. But they can get their own focus at some point. If we include them here, this piece is just going to be too long. Thanks for your patience and let’s get on with the show! 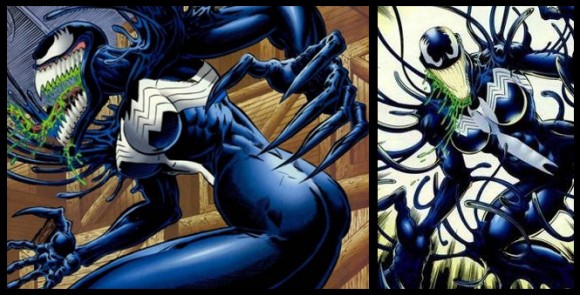 Anne Weying was Eddie Brock’s ex-wife. It is fair to say Marvel never knew what to do with her. First, she was basically a plot device, a person who provided insight on Eddie’s past and then convinced him to make a truce with Spider-Man, leading to a few years where he was more of an anti-hero. (During 1990s, many comics decided that if a villain got popular enough, they could get more money by letting him spin-off into his own stories as an anti-hero).

Anne showed up again from time to time, sometimes with a different appearance, once as an African-American. In the mini-series Venom: Sinner Takes All, the Venom symbiote temporarily bonded with her, turning her into “She-Venom.” For the record, I find it laughable that anything that’s supposed to be scary and murderous would be called “She-Venom.” Along with this, her appearance wasn’t innovative, just the Venom design with a woman’s body. It wouldn’t be the only time she bonded with the symbiote.

Anne never recovered from her experiences as She-Venom. In July 2000, Marvel decided to make Eddie a villain again and renew his quest for vengeance against Spider-Man. So in Amazing Spider-Man vol. 2 #19, Spidey was temporarily wearing his black suit again and was seen by Anne, who was already on edge. Freaked by Spidey’s appearance, she threw herself out a window. Venom blamed this on the web-slinging hero and swore revenge again. Talk about a character getting fridged.

Ah, but Anne wasn’t the only She-Venom. In 2003, a Venom comic series introduced us to Patricia Robertson, communication specialist for the US Army. Robertson wound up bonding with a clone of the symbiote, one that was more dangerous and parasitic than the original living alien costume. Robertson wound up earning the name “She-Venom” as well, though she looked like a genderless monster, an exaggerated version of the traditional Venom design. By the end of this short-lived series, Robertson separated from the creature and we haven’t seen her since.

The villainous Senator Ward temporarily joined with Brock’s symbiote. Later, in 2004, Eddie decided to seriously reform and separated from the alien permanently. He sold it on auction to a mobster called Angelo Fortunato. Later on, the symbiote decided it wasn’t impressed by Angelo and let him fall to his death.

Angelo’s look is tweaked. The spider’s more stylized, with legs implied by jagged marks. They’re nice touches and I think making the eyes visible within the white areas of his mask emphasizes this is a person wearing a living costume. Otherwise, Venom seems to have eyes as big as Felix the Cat’s. 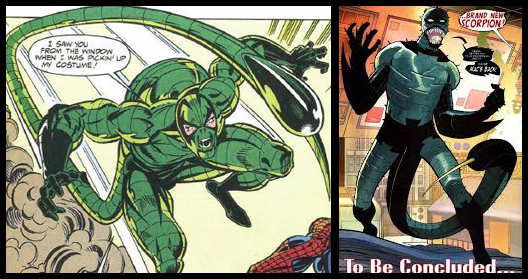 Right after Angelo’s death, Mac Gargan bonded with the symbiote. If you don’t know Gargan, he has spent decades as the Scorpion, a villain who was never quite as formidable as his name implied. Gargan was initially a private detective who then underwent a procedure funded by newspaper publisher J. Jonah Jameson to gain powers and a suit of armor with a weaponized tail. All of this was to make him a formidable match for Spider-Man. Over the years, Gargan regularly got his butt whipped.

In 2004, in Marvel Knights Spider-Man #10, Gargan became the new Venom. Initially, he looked a lot like Angelo’s version. Later on, his look altered somewhat. His eyes were still visible often, but the spider design now more closely resembled Brock’s look, although the positioning of the legs was different, extending over the shoulders and the arms. He even merged elements of his old Scorpion look into it at times. It’s not exactly a disruptive element, since scorpions have venom just like some spiders.

In the series Dark Avengers, villain Norman Osborn was now a hero to the public and formed his own band of Avengers who were really baddies masquerading as heroes. He had Gargan pretend to be the real Spider-Man. At the time, Spidey and some of the other heroes the Dark Avengers were pretending to be were on the run from the law, so it’s unclear why Osborn would have his people masquerade as vigilantes he also wanted brought in. But he wanted to do this and so he gave Gargan an experimental treatment designed to control the symbiote’s violent urges. Thanks to this, the symbiote’s appearance was identical to its original look when it was Peter Parker’s black costume.

Exactly why this treatment was needed was never explained. The symbiote can shape-shift, so it should’ve been able to adopt this non-monster appearance anyway if Gargan wanted. If Osborn really wanted him to masquerade as Spidey, Gargan could’ve had the symbiote look like the hero’s red and blue threads (it assumed that appearance before) rather than a costume the public had come to associate more with a villain. What’s more, the idea was dropped quickly and less than six issues later Gargan was using his monstrous Venom appearance regularly in public.

By the way, don’t be fooled into thinking that getting the Venom symbiote suddenly made Gargan a formidable villain who never screwed up. He still wasn’t able to take down Spider-Man, even with other villains backing him up. His most humiliating take down was probably when Carol Danvers (now called Captain Marvel, but still called Ms. Marvel at the time) decided she was sick of his long-tongue, overly developed teeth B.S. So she reached into that bizarrely constructed mouth of Venom’s and pulled Mac Gargan STRAIGHT OUT OF THE SUIT. 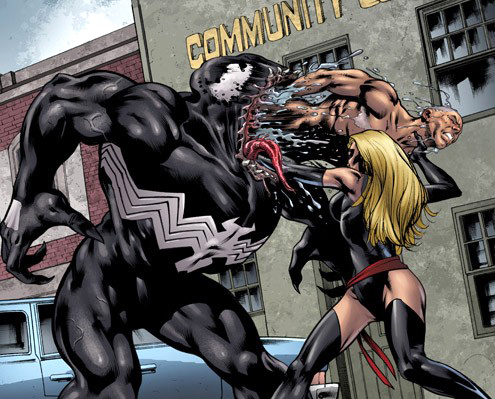 I realize what we know of the symbiote’s bond with its hosts means this probably shouldn’t work, but dammit, it was cool and I have no problem retroactively deciding that when Carol did this she energized her mighty hands with cosmic radiation that messed with the alien’s biology. Honestly, whenever Venom shows up again, Peter just needs to call Carol and ask her to handle it because time will not be wasted. You’re reading Captain Marvel, right? You should, Carol’s awesome. 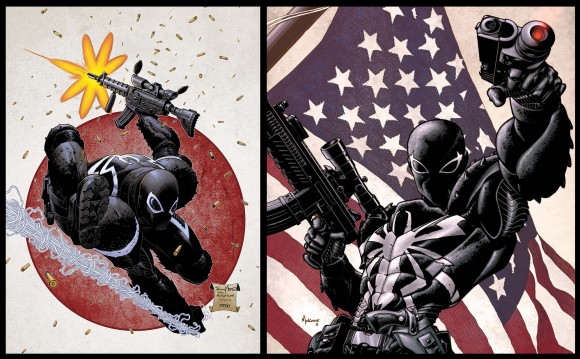 Flash Thompson debuted alongside Peter Parker in Amazing Fantasy #15 in 1962. He was a jerk who constantly mocked Peter but was also a huge fan of Spider-Man, and even founded the hero’s first fan club. Over time, Peter and Flash became friends. Flash was even Peter’s best man at his wedding (which is odd, since you’d think it would’ve been Harry Osborn, but the wedding was erased from history now anyway so whatever).

Flash Thompson had some bad things happen in his life and later wound up losing his legs. In 2011, he signed up for a black ops military program involving the recovered Venom symbiote. Flash would bond with the symbiote for short periods of time, just long enough to carry out secret operations for the government. He later also joined the Secret Avengers, where he was called “Agent Venom.”

Since the Venom symbiote’s appearance can alter to just about anything, it always seemed odd to me that it usually repeated Eddie Brock’s original look when it attached to other hosts. But in Flash’s case, we finally got some variety. Yes, the white spider design is there, but this is truly a different look otherwise. Flash is a military guy and thinks in terms of pragmatic gear. This is a utilitarian design that truly shows Flash is his own Venom, not just an Eddie Brock wannabe. The costume can look like a second skin while protecting its host, but Flash’s imagination makes it assume the appearance of padding, heavy boots, light body armor, etc.

It’s a great design and would also translate well to a live-action movie if Sony ever decided to do a spin-off film (They have, but we’re not sure which Venom we’ll get.). 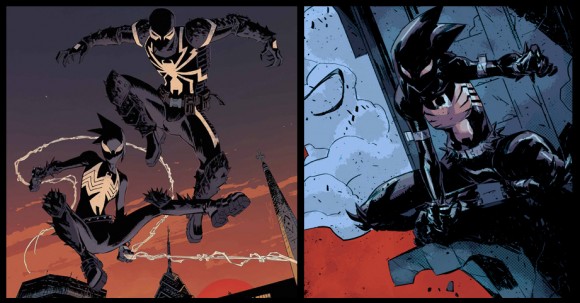 In 2013, Thompson tried to protect a woman named Andrea Benton by extending a piece of his symbiote onto her. It wound up extending itself and bonding with Andrea, turning her into a new take on the She-Venom concept. Thankfully, she picked the better name of Mania (yes, it’s a rather generic name, but it’s still better than “She-Venom.” The costume is pretty simplistic, mimicking Brock’s look while incorporating elements of the Flash Thompson version of Venom. I do like the hair and boots.

I don’t normally go into parallel realities when I’m focusing on the mainstream characters. But considering that the Spider-Man of Marvel’s 2099 future timeline has recently appeared in mainstream comics recently, what the hell. If you’re not familiar with the 2099 world, it was a possible dystopian future that Marvel created in the 1990s. In that world, geneticist Miguel O’Hara became the Spider-Man of a new era. At one point, his old enemy Kron Stone wound up coming across what was left of the original Venom symbiote, merging with it to become a new version of the villain.

The symbiote had evidently mutated a bit by the time Kron came across it. It now had a few more powers and bonded with its host on a molecular level. That meant as Venom, Kron could shift into liquid or goo as if he were the living costume itself and not a human being wearing it. Despite this molecular bonding, Kron was later separated from the symbiote (at least for a time). 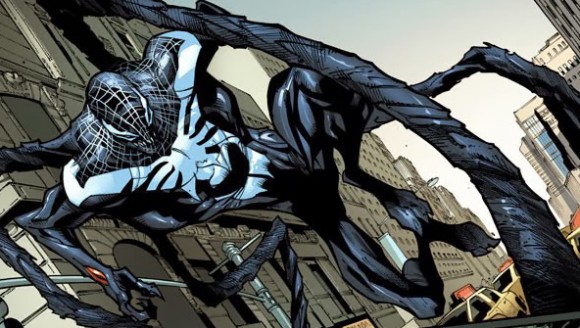 Most recently, in the pages of The Superior Spider-Man, Otto Octavius temporarily bonded with the Venom symbiote. His version of Venom has the classic spider design but adds clawed feet, tentacles, and white spider-webs on the mask and shoulders that recall Peter Parker’s classic costume. Those tentacles can take on the appearance of giant spider-legs, making this a terrifying new take on the villain.

And that wraps things up for us this week. Remember to send us suggestions for other subjects you’d like to see tackled by Agent of S.T.Y.L.E. It doesn’t have to be superhero comics either, just characters who show a true change in design over the course of their histories. Until next time, stay geeky.

Alan Sizzler Kistler (@SizzlerKistler) is an actor/writer who identifies as a feminist and time traveler-in-training. He is the author of Doctor Who: A History.