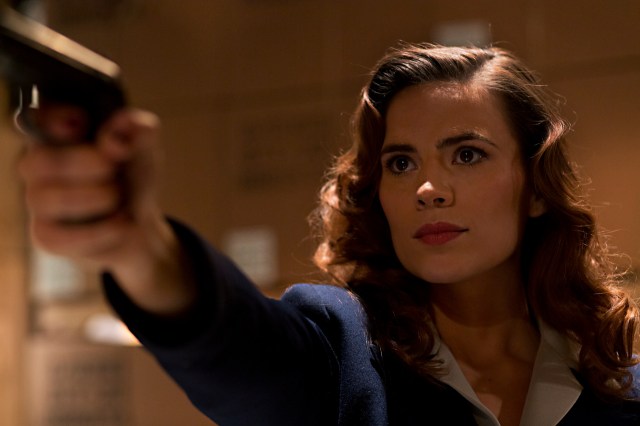 Agent Carter‘s season two finale airs tonight — and rumors that the show might not return have been swirling for weeks now. The show’s second season has had low ratings throughout, and series star Hayley Atwell recently signed on to do a different show with ABC.

In a series of interviews during the run-up the Agent Carter finale, Hayley Atwell has taken the opportunity to reassure fans that ABC will let her switch off between filming both shows simultaneously, should Agent Carter get renewed for a third season. But should we hold out hope for that? Or should we just go ahead and start writing fan-fictions about what should happen in season three (and beyond)?

Atwell has some good suggestions for those future fiction pursuits — or for the third season’s writers. As she told The Daily Dot,

Because we know that [Peggy Carter] lives a long life—from The Winter Soldier we know she dies probably in her nineties—you have the civil rights movement, you have the 1960s, the Cold War, you have all these incredible things that will happen socially and culturally in America and in Europe, that she will definitely have been involved with.

I love the idea of a season set in London, to see that side of her and go back to her roots a little bit. And I think because of the genre that it’s in, anything’s possible. I think she’s someone that’s up for new challenges, so she’ll embrace whatever that’s in front of her. I can see her being a raging hippy in the ’60s, and a huge advocate for women’s rights. I think to be able to do that in a TV show would be lovely. But of course I don’t have the power, I just have to sit and wait to see what the audiences want.

In another interview at IGN, Hayley Atwell told us that the season finale will leave some plot points unexplored, so as to prepare for the potential third season — but it’ll also be a satisfactory ending point, just in case the show doesn’t get renewed.

I think there’s so much more to explore. The finale suggests a couple of cliffhangers that would make us go, “Oh, what does that mean?” The finale doesn’t suggest that that’s it and they live happily ever after; that’s the end. We know that’s not the case. They’ve done it in a very clever way which wraps up and that gives the audience a very satisfying conclusion but they’re not quite finishing it and leaving it there. But it’s one of the realities of the industry that I work in. This industry depends upon ratings and if the audiences aren’t there, the shows don’t get put on. Despite the fact that we have a whole creative team here who love our show so much, who love doing and we’d do it for the rest of our lives if we could and if people were interested enough. That’s not for us to say. That’s for the networks to decide based on what they feel their audience want. So I will deal with it graciously if and when it happens.

I’ve really enjoyed the show’s second season — it’s definitely different from the first season in terms of tone and structure, but I like the differences. I wouldn’t want to see Agent Carter just do the same thing over and over. I think the second season has proven that this show has a lot of room to grow and a lot of potential directions to take.

I know you all like the show around here, too, because you’ve been reading my recaps in way higher numbers than you did for, say, my short-lived attempt at recapping Gotham (a show which is still going on, by the way, even though it seems to have a far less vocal fandom online compared to other superhero shows).

Even though Agent Carter is popular here at TMS, we may well be the only people watching it! Call a friend and tell them to tune in to the finale tonight, okay?

(via The Daily Dot, image via Marvel TV)