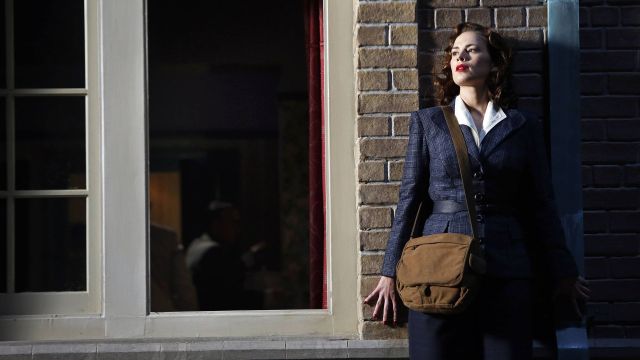 “Those girls from the telephone company are all the same.” Or are they? This week on Agent Carter, covers are blown, secrets come out into the open, and the MCU gets its first “lesbian” kiss (if you squint real hard and ignore the implications).

We open in Russia, 1944. A group of men are being recruited into Leviathan, at the point of a gun. A gun wielded by a very familiar looking blond woman. One of the men being recruited is the Soviet psychologist from last week’s episode, who’s name is Dr. Ivchenko.

Flash forward to the present day (well, Agent Carter’s present day), and Dr. Ivchenko is explaining the ways of Leviathan. He’s an open book, telling the S.S.R. everything they want to know. But Peggy is stuck on that blond. In a previous episode, Dooley and Thompson would have shut Carter down on the idea that one of Leviathan’s female assassins was responsible for Krzeminski’s death, but following her adventures in Belarus, they’re willing to let her go down that rabbit hole on her own.

It’s this scene’s discussion of Leviathan’s female assassins, our theme for this week is revealed. In what we’ll find out was a rare moment of honesty from Dr. Ivchenko, he says something which has become apparent over the course of the series so far: “Women are often overlooked.” And this episode is all about what we overlook when we’re searching for the easy answer.

Over at the automat, Angie replays her audition for a production of A Doll’s House (a play that is all about an overlooked woman), musing that she clearly doesn’t have what it takes to be an actress. Then Jarvis arrives, and he and Peggy can get down to brass tacks. Namely, just how promiscuous is Howard Stark? The answer: very. It turns out Stark gives every woman he sleeps with a diamond bracelet, which, ew. Carter and Jarvis go down the list of women who got bracelets, door to door, with Jarvis being slapped by a succession of women who, they assure Peggy, are Not Floozies.

While this is going on, there’s a flurry of activity from our other characters. Dooley continues to question Dr. Ivchenko, until Ivchenko (also overlooked) manages to turn the conversation to Dooley and his problems. Meanwhile, across the street, Dottie has infiltrated a dentist’s office, killed Dr. McSexual-Harassment, and is exchanging morse code messages with Ivchenko. Everyone who guessed Ivchenko’s collaboration with the S.S.R. was a trap of some kind was correct! Ivchenko uses morse code to give Dottie a new mission: kill Peggy Carter. Because Peggy was really hurting for dangerous enemies to fight off. 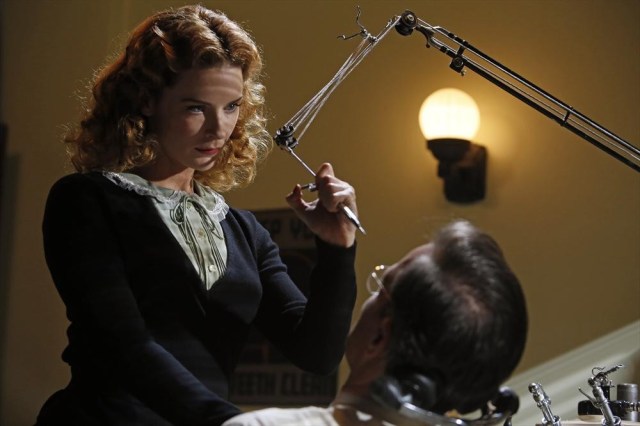 Not to be outdone by that bombshell, Agent Sousa visits a jail to get final confirmation from that guy Peggy handcuffed to that chair that one time. Yep, the woman he’s looking for is Agent Carter.

Back at S.S.R. HQ, Dooley, Thompson, Sousa, and the rest of the keystone kops dash out of the office on an exciting mission. Leaving Dr. Ivchenko alone with young Agent Yauch so that we can get a better look at exactly how his hypnosis technique works. It’s reminiscent of Whitehall’s work over at Hydra, heavily dependent on repeated words and gestures. Specifically, Ivchenko’s shiny wedding ring and the word “focus”. Yauch cracks like an egg, but sadly he can’t get Ivchenko what he needs.

But back to Peggy and Jarvis and the hunt for their mystery communist. They’ve they hit a dead end. It seems that a woman named Ida is their most likely candidate for Stark’s vault break-in, but her apartment is empty except for a single clue: a worn spot on the bedpost where a handcuff was likely locked. Promising, but without more leads, where can Carter’s investigation go from here?

They retreat to the automat, where it quickly becomes apparent that finding the mysterious Ida is the least of Peggy’s worries. Because the automat is where the S.S.R. guys were off to in such a rush, and they weren’t going there for egg creams. Peggy not only takes out all her male colleagues (including Thompson!), she adds a few supplementary agents to the mix. Then she dashes out the back door and into the clutches of the one man who couldn’t get into the fight: Daniel Sousa. Peggy is able to talk her way out of getting taken down by Sousa, but to his credit, it’s mostly because he knows exactly where she’s going.

Peggy can’t flee New York without Steve Rogers’ blood, so she dashes off to The Griffith, with the S.S.R. in hot pursuit. Knowing Miriam Fry will create a diversion, she rushes up to her apartment, grabs the PokéBall with the vial of blood from the hole in her wall, and is about to make a break for it when Sousa and Thompson burst into the apartment, forcing her out onto a convenient ledge outside the building.

Finding the apartment empty, they move on to question Angie, next door. And here we have the most overlooked woman of all. Angie digs deep into her craft and manages to convince the S.S.R. that Carter is long gone. It turns out Angie had a feeling Peggy wasn’t a telephone operator this whole time. She sends her friend off to her brother, who has a car she can take to escape the city. 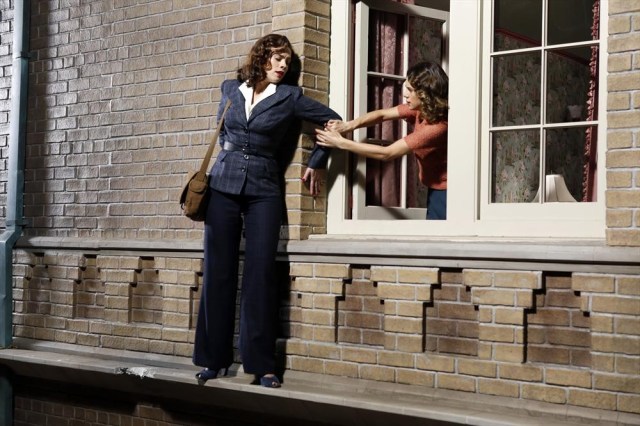 Running through the halls of The Griffith to make her getaway, Carter runs into Dottie. Of all people. You should have shimmied down the drainpipe, girl. In the midst of her Midwestern babble, Dottie kisses Peggy full on the mouth. “You’re wearing my brand,” Peggy murmurs as she collapses, eyes trained on the handcuff callus on Dottie’s wrist. Because, yep, Dottie was wearing Peggy’s knockout lipstick she stole from her apartment in last week’s episode.

The decision to take Peggy out with a kiss rather than a gunshot is an interesting one. Dottie was given orders to kill Agent Carter, and Dottie has never been subtle about any of her other marks. Did she think the lipstick was poison? Is she trying to take Peggy alive for some reason? Is she acting counter to her orders? And if so, why? What if Dottie is even more overlooked than Dr. Ivchenko knew?

[Editor’s Note: From Sara, “It’s been brought to my attention that Dottie pulls a knife after kissing Peggy. I looked down to take a quick note and didn’t catch it! That’ll teach me to watch the show as broadcast as opposed to streaming! So, ummm, yeah, forget I suggested that Dottie wasn’t planning to kill Peggy. She probably was.”]

It also has to be mentioned that this moment has been called by some fans “the first lesbian kiss in the MCU.” I think that’s a stretch, because neither character is a lesbian (that we know of), and it’s not an amorous kiss at all. In fact, as much as I adore Peggy/Dottie femslash, I think characterizing Dottie’s drug-laden kiss as “lesbian” is a little bit problematic. But it’s a fascinating choice for Dottie’s takedown of Carter, and it raises so many more questions than it answers.

Peggy is cuffed and taken back to the S.S.R. in a daze, where she says she can explain everything… next week. And what’s worse, while all this excitement has been going on, Angie has wandered into Dottie’s room, which can’t be a good idea, since last time we saw Dottie’s room, there was a dead flower delivery guy under the bed. This can’t end well, can it?

This episode reminded me so much of the beginning of Alfred Hitchcock’s North By Northwest, which is also about a protagonist who is always overlooked. Until the day he is noticed by everyone in America, because he’s been fingered for murder in a case of mistaken identity that also gets him tangled up in an international espionage caper. He flees through New York City, and later across the country, trying to evade both the police and the spies who think he’s involved in the transfer of government secrets they’re trying to get their hands on. I was definitely hoping Peggy would reach Angie’s brother’s car, because I’d love to see what Marvel would do with the famous Mount Rushmore set piece. If you liked this episode of Agent Carter, and you somehow haven’t seen what is probably Hitchcock’s greatest movie, you should remedy that, stat.

So what did you guys think of this episode? That kiss? Angie’s big scene? What is Leviathan trying to accomplish in America? And how is Peggy going to extricate herself from this one?