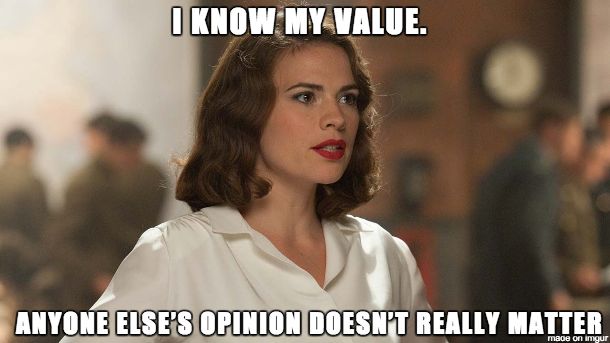 Is it just me, or did it feel like Agent Carter was doomed from the very beginning? It seemed like that’s how everyone treated it, even within the fandom—like it was too much to ever expect it to last, like we should appreciate it in spite of its flaws, like we should watch it as part of our fangirl duty.

I had some conflicting feelings about that at the time. I voiced my concerns, even though people told me I should just sit back and appreciate that the show existed at all. I criticized the show’s predominantly white cast (which isn’t accurate to the time period, no matter what anyone tells you). I worried that the season two episodes lagged behind too much. I fretted that the decision to move Peggy Carter all the way across the country, and the over-reliance on Howard Stark’s character, felt like weird attempts to change the dynamic of the show. I loved the character for Jason Wilkes, and I hated that season two ended with him making an unceremonious exit out of Peggy’s life.

There were other great things about season two, in spite of its problems. I liked the villain arc with Whitney Frost, although I agree that the pacing felt rushed at times. I liked the friendship dynamic between Peggy and Jarvis. Although Jarvis’ adventures in secret-agenting didn’t feel realistic at first, the consequences did. But ultimately, the show never seemed to quite escape from its own limitations.

Agent Carter is—should be—a show about a woman pushing back against institutional sexism. That isn’t its limitation. When the show focused on the barriers to Peggy’s progress, we shared in her frustration and anguished alongside her over her unappreciated, uncredited victories. But the show seemed uncertain about this central decision, particularly in season two.

The plot of season two devoted multiple episode arcs to the state of Peggy’s relationship status, telling us about an old broken marriage engagement she had early in her career, and then introducing a love triangle with Sousa and Jason. Given her tragic backstory with Captain America, it felt weird to introduce yet another serious break-up in Peggy’s past. Given that she also spent all of season one getting over Steve, it felt even stranger to focus season two on pairing her back up again.

Throughout, Howard Stark kept on snarking in the background with unsolicited come-ons. Meanwhile, the show kept pointing us towards Jarvis and Ana’s relationship, reminding us of the importance of settling down and having a family … and the tragedy that it would be if that weren’t possible. Even the introduction of the character Rose also dovetailed with the introduction of an annoying male suitor. The other new female character? Sousa’s fiancee, who is only introduced as a barrier to Peggy and Sousa getting together.

Meanwhile, Whitney Frost’s plot also involved marriage and relationships. As the villain of the piece, she abandons a stable marriage (and kills her husband, in self-defense!), re-enters an old relationship with a less-than-savory ex, then abandons him too. Her final reverie is a dream about her former husband. Yikes.

I did wonder, as I watched, whether Agent Carter was leading up towards telling us all that Peggy doesn’t actually need to be in a relationship. I mean, there’s really not anything wrong with her being in one … but by making relationships, marriage, and family into the narrative focus, season two seemed to lose its central point, which was supposed to be women fighting institutional sexism in the workplace. Let’s extrapolate that metaphor out a bit: Agent Carter‘s workplace is modern television. Agent Carter, the TV show, proved that it did not know its value.

Agent Carter, the character, does know her value. But I’m just not sure that her show understood what it was that made her so important to us. It’s not that we don’t want her to be in a relationship—nor have some exciting love triangle adventures—but why on Earth would that be considered the most interesting part of her narrative? It almost feels as though the writers simply couldn’t figure out what else to do with her, let alone the rest of their female characters. Almost every woman on the show ended up in a relationship, or had a significant plot point that was almost completely revolved around the relationship that she was or wasn’t in. Unless I’m forgetting somebody, I’m pretty sure they all had a plot arc that revolved entirely around a male suitor.

What’s weird and sad about this is that this just doesn’t happen on shows that are about men, no matter what time period they’re in. The focus is always on their adventures, the crime-fighting, the mysteries. The love stories take a back seat. It felt so disappointing for me to see that love, relationships, and marriage continued to be the overarching themes on Agent Carter, when it just didn’t feel like something that would’ve happened on a show that wasn’t about a woman. Far more importantly, though, it just didn’t seem to fit the overall tone or goals of the show.

I’m not going to say that’s why the show failed, because I don’t know for sure. It could’ve lagged behind in the ratings for any number of reasons. A lot of my friends said they stopped watching because they just got bored. But why did they get bored? Why wasn’t the show exciting to them in season two, compared to season one? I can’t say for sure, but I don’t think focusing on Peggy’s relationship status helped.

I know people will look back on this cancellation and cite it as a reason why genre fiction about female characters doesn’t work. Just yesterday, I had someone on Twitter (I won’t link to it) telling me that Margot Robbie’s plans for a Harley Quinn movie will fail because female characters just aren’t bankable … and that’s in response to a project produced by Margot Robbie, who is a mega-successful, conventionally hot, up-and-coming actor with multiple hits at Warner Brothers already!

It doesn’t seem to matter how many counter-examples we provide. People still seem to think that woman-fronted projects are doomed, and even those of us who watch them seem to think so. That attitude ends up hurting the projects, I think. It decreases the amount of imagination that writers feel about the characters. It might be subconscious, but I think it leads to writers feeling as though they can’t take any risks.

Peggy Carter started out as Captain America’s girlfriend. It was radical that she went from being just that to fronting her own show. But it seems like no one could manage to see her as anything more than just a girlfriend. Without Captain America there, that role just had to be filled, I guess. The narrative structure just didn’t allow for anything beyond that.

I think she deserved better than that. And I’m disappointed that she didn’t get it, and that now, people will say that the show failed because it was about a woman. Maybe it failed because we, as a society, just can’t imagine how to tell the story that Agent Carter deserves.