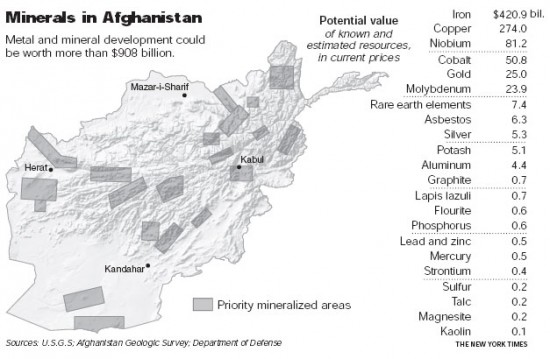 The recent findings of a geological team in Afghanistan could lead the country into one of its most economically tumultuous yet fruitful eras. A team of American geologists and Pentagon officials who were surveying the country in search of some sort of mineral deposit found something greater than they’d imagined could be out there: Almost $1 trillion dollars in untapped minerals including iron, copper, cobalt, gold, and great quantities of lithium, an essential metal for making batteries and other tech devices.

A trillion dollars worth of untapped metal is just as important as it sounds, if not more, and the speculation is that this will be the biggest industrial and economical breakthrough in the nation’s history. It could completely transform how the country is viewed and how it interacts internationally.

It will undoubtedly trump any other economic exploits of the nation. The New York Times reports that Afghanistan’s GDP is roughly $12 billion. The rush to tap into the far more valuable mineral deposits should jumpstart the economy with an unprecendented boost.

But while the potential benefits here for Afghanistan are many (improved economy, improved infrastructure, global involvement, shiny things to wear), there are many potential setbacks the nation could suffer through this discovery as well.

First, the wealth one could acquire from just a fraction of the metal deposits could stir up a small-scale war over control of the abundant area, as there are likely still terrorist factions who would love to get tons of money while at the same time shutting down a potential stabilizer for the nation’s economy (and also, in some ways, shutting down a United States effort).

Then there’s the fact that politically and legally, Afghanistan suffers from corruption, lack of enforcement, and inexperience in matters like this. According to the Times:

The corruption that is already rampant in the Karzai government could also be amplified by the new wealth, particularly if a handful of well-connected oligarchs, some with personal ties to the president, gain control of the resources. Just last year, Afghanistan’s minister of mines was accused by American officials of accepting a $30 million bribe to award China the rights to develop its copper mine. The minister has since been replaced.

Endless fights could erupt between the central government in Kabul and provincial and tribal leaders in mineral-rich districts. Afghanistan has a national mining law, written with the help of advisers from the World Bank, but it has never faced a serious challenge.

This could turn out like another gold rush, where a massive influx of prospectors take over and subsequently ravage the mineral-rich area. While this could create jobs, it could also create a tension where Afghanistan feels invaded by all these unfamiliar foreign mining companies. And there’s no strong incentive yet for miners to set up infrastructure for long-term Afghani benefit.

It’s no surprise that a massive mineral deposit could have massive consequences. It will take around a decade, though, for any functioning mining installation to be set up, so the long term consequences won’t be known for some time. But in the short term, we could certainly start to see violence at any moment. There have been no publicized threats regarding control of the mineral areas, but it’s not an unreasonable assumption to guess someone may try to take it by force quite soon.

And considering how much there is to gain, it could be quite a long battle. The Times reports:

So far, the biggest mineral deposits discovered are of iron and copper, and the quantities are large enough to make Afghanistan a major world producer of both, United States officials said. Other finds include large deposits of niobium, a soft metal used in producing superconducting steel, rare earth elements and large gold deposits in Pashtun areas of southern Afghanistan.

Just this month, American geologists working with the Pentagon team have been conducting ground surveys on dry salt lakes in western Afghanistan where they believe there are large deposits of lithium. Pentagon officials said that their initial analysis at one location in Ghazni Province showed the potential for lithium deposits as large of those of Bolivia, which now has the world’s largest known lithium reserves.

This is an incredible find for the nation, and we can only hope that it is handled responsibly, in a way that benefits both the nation of Afghanistan and the global community.