You'll believe a man can fly! Or at least pedal furiously. 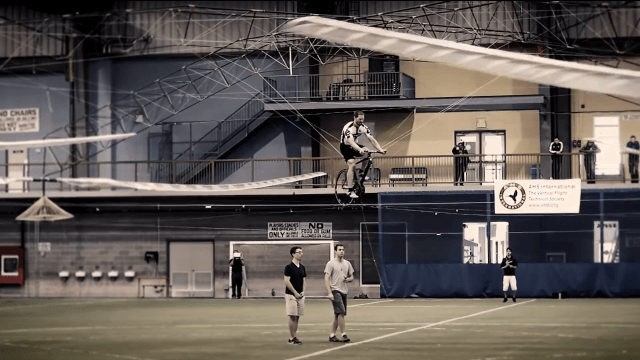 If you’d ever heard of the AHS Sikorsky Prize before now, you already know that it hadn’t been won in it’s entire 33-year length history — which makes it kind of like the James Randi One Million Dollar Challenge, only a little less impossible. Well, prepare to have your worldview shifted forever: Apparently it is possible to keep a helicopter up in the air using nothing but human power, because a team of engineers from Toronto just won the prize. So that’s what Canadians do with all that free time they have left over from not fighting in wars or worrying about healthcare.

First established in 1980, the Sikorsky Human Powered Helicopter Competition is run by the American Helicopter Society International. Up until this year, the AHS had never awarded the prize to anyone due to its extremely strict guidelines, which include a flight duration of 60 seconds and altitude of 3 meters (9.8 ft) while remaining in a 10 meter (32.8 ft) square. The AeroVelo Atlas, however, stayed up for 64.11 seconds, reached an altitude of 10.8 feet and drifted only 32 feet during its June 13th flight in Ontario.

When asked about how he felt while piloting the helicopter by The Wall Street Journal, team leader Dr. Todd Reichart said, “You’re not thinking about how nice it is to be flying with your feet. You’re thinking, ‘I’m a machine.’ The level of physical and mental focus was like nothing I’ve ever experienced before.”

Below is the beautifully edited video that’s “a compilation of footage from the record flight, as well as previous test flights.” Naysayers on the Internet are already calling shenanigans, but since the flight is required to be certified by a representative of the Fédération Aéronautique Internationale, I’m pretty confident in believing that this isn’t a hoax.

Here they are with a nice fat check: