Ada Initiative To Help Women In Open Technology And Culture 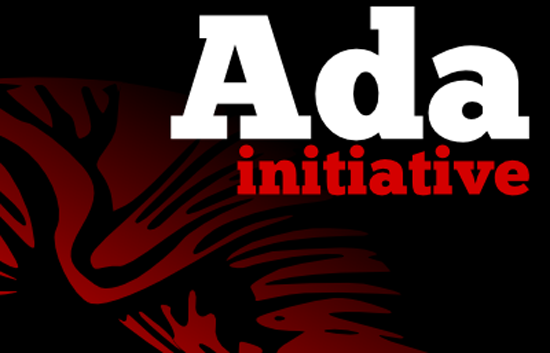 I’d like to think Ada Lovelace would be proud of these two women. Valerie Aurora and Mary Gardiner are the founders of the Ada Initiative, a non-profit organization created to support the participation and work of women in open technology. It was probably a long-time coming, unfortunately it was an instance of unsolicited groping that finally got the ball rolling.

Linux kernel developer Aurora told TechWorld it was hearing, for the third time, about a female being groped at a technology convention. “As I heard about it I knew I’d remember all the times I’d been groped as well, and insulted and harassed — and that was just too much,” she said. Aurora, now the Executive Director of the Ada Initiative, combined her knowledge and ideas with their now Director and Operations of Research, Gardiner, to form the organization.

“I think part of what happens in some of these fields [like open source is that] you have a really extreme minority of women and you get the outsider status that’s associated with being an extreme minority,” said Gardiner. “People at Linux.conf.au have started it calling it being a unicorn. I think someone last year actually had their camera and would take pictures of women [when they spotted some].”

“In a 2009 keynote at OSCON (O’Reilly Open Source Convention) Alex Bayley cited a 2006 EU survey that found only 1.5 per cent of contributors to open source are women,” according to the article. “Almost two thirds of female participants in the EU study, conducted by the University of Maastricht, believed that it was easier for men to get acknowledgement for their contribution to open source projects.”

Another study published in Journal of Information Technology Management, on the open source community found that 50 per cent of the women who participated had experienced online or offline harassment.

“We believe that open technology and culture has a higher leverage affect on society as a whole,” said Aurora. “So it’s like we can say ‘Oh well what we really need to do is fix sexism in society overall’, and then we can say ‘Well look if we’re writing Wikipedia, if we’re writing the software that everybody uses, if we’re creating what’s on the internet and setting the culture on the internet, which spreads to everybody, then we are changing sexism in society at large’.”

Of course, with any one particular segment of society, there’s no consensus about the situation at hand. “There’s a wide range of opinion among women and open source and women in open stuff in general about what we should do and what approach we should take.Whether we should just hide ourselves and pretend nothing’s wrong, or never, never talk about the gender gap problem,” said Aurora. “Our guideline is that you believe women should have equal rights and that participating in technology is important other than that we have a lot of different people with different opinions.”

Created in 2011, the Ada Initiative “isn’t intended to replace some of the existing open source women’s networks, Gardiner says: ‘We are definitely not aiming to replace LinuxChix or replace the Haecksen mini conf with an Ada Initiative mini conf or anything like that.’ Instead, the Ada Initiative intends to ‘do some of the harder stuff that costs money and time, that people haven’t had money and time for.'” To help on that front, they’re looking for sponsors and supporters.

TechWorld writes, “The Ada Initiative has five projects it will be focussing on initially: First Patch Week, Ada’s Advice, Ada’s Careers, research, and organising AdaCamp conferences.” You can read more about what those entail at TechWorld and learn more about the Ada Initiative on their website.