Here Are Some Great Comics by #ActualAsianComicWriters That You Can Buy – Just in Time for Holiday Shopping! 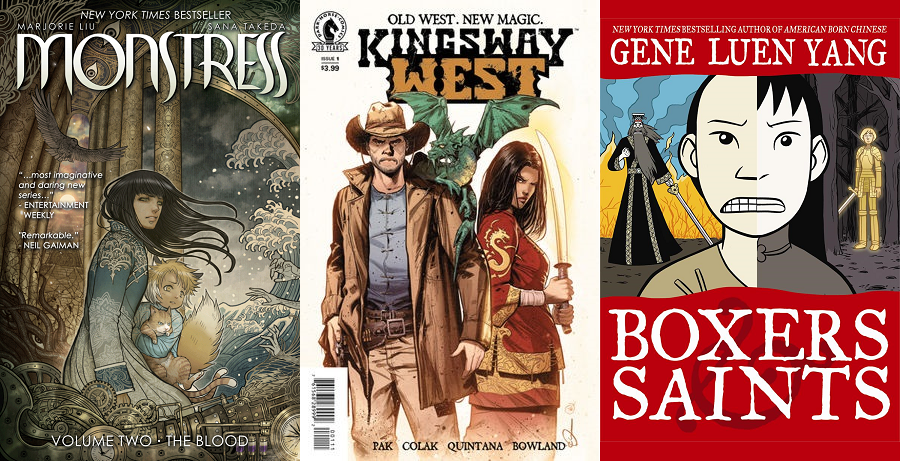 In the wake of revelations that Marvel’s new editor-in-chief, C.B. Cebulski, wrote a number of Japan-set comics for them under the pseudonym Akira Yoshida in the early 2000s, even going so far as to give interviews in which he invented an entire backstory for his yellowface pen name, Asian comics creators banded together to highlight the work of comics writers who are actually Asian.

According to Huffington Post, the hashtag #ActualAsianComicWriters was started by activist Mark Tseng-Putterman. The tag has featured scores of amazing Asian creatives, but we at TMS wanted to highlight a few our favorite works from some of these creators, both in manga and in Western-style comics.

Our list below is by no means exhaustive (not even for the individuals whose work we listed!), and we focused on writers because of the nature of the tag, so please share your own recommendations in the comments. The more we can spread the good word of authentic, entertaining representation, the richer our creative industries (and our personal comics collections) will be.

Boxers & Saints, by Gene Luen Yang. When someone tells you they’ve got a two-volume series on the Boxer Rebellion, your eyes might start to glaze over, but both volumes of Boxers & Saints are remarkable, character-driven stories about young people growing up and discovering purpose during historic upheaval. Like the very best historical fiction, they don’t leave you with facts and dates so much as they leave you with a painful sense of what it must have been like to live through these events. There’s a reason this one was both a National Book Awards Finalist and the winner of a Los Angeles Times Book Prize.

Monstress, by Marjorie Liu with art from Sana Takeda, is full of gorgeous, intricate world-building that invites a greedy reread. I’m head-over-heels for the aesthetic of this world. As Teresa summarizes, “It’s the perfect example of what happens when you allow a non-white creator to bring their unique perspective to comics … I love that it tells an original fantasy story that still feels ancient and like real, old folklore, and I love how deeply feminine it is in all its violence and savagery.” Just treat yourself already.

Sailor Moon, by Naoko Takeuchi. Millions of English-speaking teens grew up watching the Sailor Moon anime, but now’s as good a time as ever to read the manga that inspired it. As Princess says, “Sailor Moon is to me what Wonder Woman is to people who love American comics. Usagi was the first heroine I’d ever known who was really flawed personality wise. A crybaby, a klutz, and not super intelligent, her only real character strength was that she was very emotionally kind. That’s why I always loved Sailor Moon, because it showed me that emotional strength, love, and empathy are powerful – powerful enough to defeat even the most fearsome monsters. I mean, she fights evil with magical wands and butterfly attacks!

Kingsway West, written by Greg Pak, with art from Mirko Colak. I do not much like regular ol’ Westerns, but I love me a weird Western, and this one fits the bill. Pitched as “Once Upon A Time in the West meets Princess Mononoke,” it follows a Chinese gunslinger and a swordswoman through a reimagined American West where they have to face historical injustices, like anti-Chinese racism, as well as fantastical foes like magic and dragons.

Card Captor Sakura, from CLAMP. “CLAMP, the all-women manga studio, was one of my first exposures to LGBTQ characters,” said Princess. “Throughout their work, they’ve featured many queer couples, as well as depicted gender fluidity and sexual fluidity. They’ve also created some really iconic heroines, and Sakura from Card Captor Sakura is my favorite of those. She’s a kind, thoughtful person whose power truly comes from having a good heart. At a young age that (along with Sailor Moon) was a huge influence on me.”

Poison Ivy: Cycle of Life and Death by Amy Chu, with art from Clay Mann, Seth Mann, Ethan Van Sciver and Robson Rocha. I’ll admit that my fondness for this six-issue miniseries multiplied once I discovered the backstory; Chu, frustrated when DC reassigned her book to alleged serial harasser Eddie Berganza, added a subplot where Ivy murders a workplace predator. But I was also always going to love a series where Ivy’s doing science, slaying men, and solving plant-related mysteries. I mean, come on.

This One Summer, written by Mariko Tamaki and illustrated by Jillian Tamaki, is an achingly lovely coming-of-age story. The disarmingly kinetic and cartoon-esque art gets you rolling along, and then suddenly an emotional gut-punch of a line, or a lingering silence, will make you catch your breath. This book is just so full of tenderness; I wanted to physically snatch it up and hug it. [And as long as you’re looking into Mariko Tamaki, Teresa also recommends Supergirl: Being Super, Tamaki’s amazing YA take on Supergirl’s origin story.]

Scott Pilgrim, by Bryan Lee O’Malley, really needs no introduction, but if you haven’t read it yet, what are you waiting for? This compulsively readable and fast-paced series is an awesome hybrid of manga and American comics styles. And if you’ve already read Scott Pilgrim, I highly recommend Seconds, which was an honest, incredibly human look at perfectionism and the fear of real consequences, all mixed up with space-time disruption and magic mushrooms.

DC Super Hero Girls Novels by Lisa Yee. Okay, I’m cheating, these are prose books! BUT, since this post is conveniently timed near the holidays, I had to bring these up. If you are looking for something awesome for your superhero-loving nieces and nephews to read, and you haven’t found a cape comic that feels age-appropriate, this middle-grade series is an absolute delight. It follows DC heroes like Batgirl, Katana, Supergirl, and Wonder Woman at Super Hero High, and the books are super-fun.