'The Expanse' Star Accused of Sexual Assault | The Mary Sue 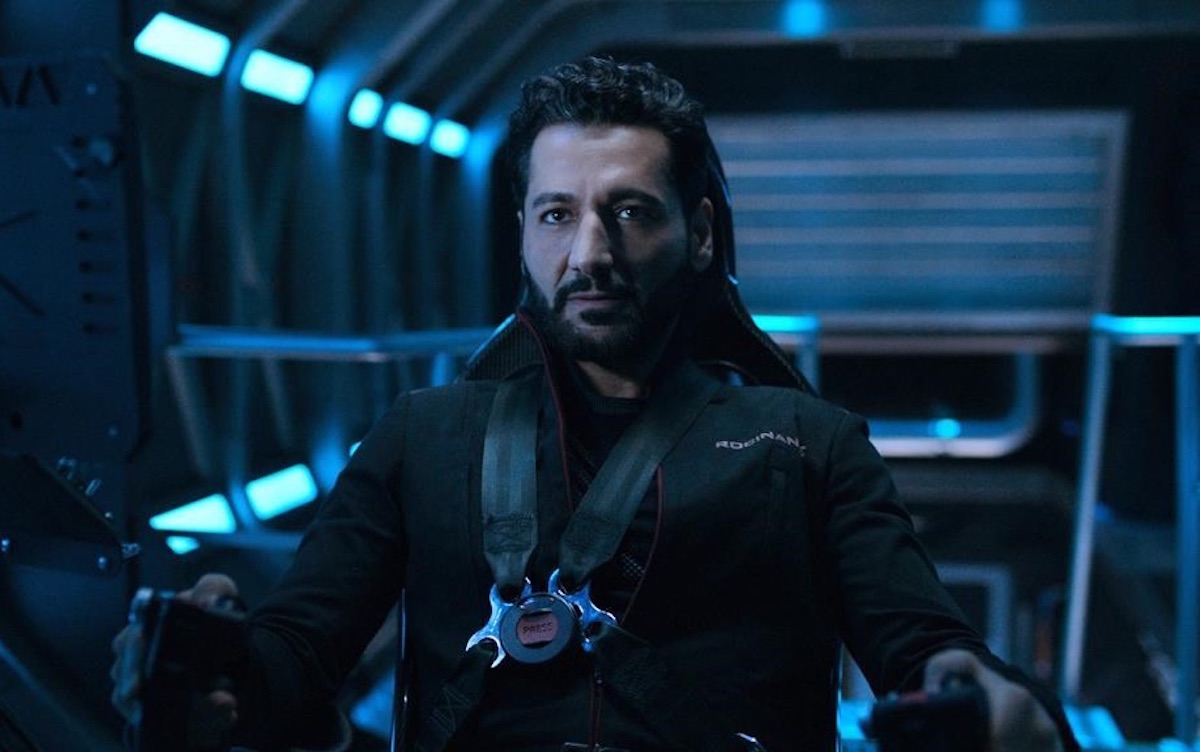 Actor Cas Anvar, best known for playing Alex on The Expanse, has been accused by multiple women of sexual misconduct. The allegations, which seem to follow similar patterns and are supported by text messages from Anvar, establish what appears to be harassing behavior for years—often targeting female fans online and women at conventions. Several of the women also allege that Anvar assaulted them, and some that he seemingly interacted with were as young as 17.

Powerful people are facing a reckoning for their actions, and as of late, more and more victims are coming forward with harrowing stories across industries. Victims often find that after voicing their own experience, they were hardly the only ones affected by someone accused of sexual misconduct. Such was the case with Anvar, known to science fiction fans as the Rocinante’s pilot Alex Kamal on The Expanse, and to video game fans for his voice work in Assasin’s Creed Revelations as Altaïr.

As The AV Club summarizes, it’s alleged that Anvar used his status in these genre worlds “to manipulate and coerce young women, some underage, into sexual situations, and into sending him sexual photographs. There have also been multiple accusations of Anvar sexually assaulting women under similar circumstances.”

Over the weekend, the door was thrown open by a Twitter user who posted about Anvar allegedly assaulting and harassing her friends. “While we’re throwing out the garbage, toss Cas Anvar onto the pile,” cosplayer and gamer @Lorie_O wrote.

While we’re throwing out the garbage, toss Cas Anvar onto the pile for targeting female Assassin’s Creed fans. I have two friends who told me he aggressively pushed them to meet up with him. One was creeped out and said no. The other he assaulted.

This door soon became a floodgate, as multiple women came forward with their own allegations and experiences with Anvar. Fans of The Expanse began keeping detailed and meticulous records of the social media threads about Anvar on Reddit; you can read through the whole timeline and the collected allegations here.

So, the “you’re a sexy little elf, aren’t you?” story? The guy who thought groping my tits would be super exciting for me? Gave me cab money to gtfo as soon as he was done with me?

That was Cas Anvar.

Receipts because, fuck it. Some choice excerpts of him trying to make me feel bad and that it was all my fault(?) for rejecting him. Bonus screenshot of me sending the screenshots to another con guest to get their opinion (edited for privacy). pic.twitter.com/eMKLKVRCOI

He sent me loads of insistent Twitter DMs when I was about 17 and they made me uncomfortable as HELL at the time. Looking back on it years later I’ve realised how creepy and wrong it was.

As of this writing, there are almost 30 accounts from different women who allege sexual misconduct from Anvar that ranges from aggressive texting to inappropriate touching to assault. One of the accounts comes from an actress who worked with Anvar, and in another thread, a former VFX coordinator on The Expanse corroborates the allegations. One woman details what she says was an assault by Anvar when she was 17.

The immediate response from the creative team behind The Expanse has been heartening. Ty Franck and Daniel Abraham, the writer/producers who also write The Expanse novels under the joint pen name James S.A. Corey, tweeted from Corey’s account that the allegations were being taken seriously by their studio Alcon Entertainment, and that the studio had hired an independent third party investigator.

And, if I may, a wholehearted thank you to those who were brave enough to bring this to us. We hear you. This will get the attention and action such serious allegations deserve. I’m staking my reputation on it.

Members of the main cast posted statements confirming the investigation and affirming the seriousness with which the accusations are being treated. Several castmembers assured Anvar’s alleged victims that they have been seen and heard. Members of Reddit’s /r/TheExpanse collected the creatives’ responses to date:

On Monday, Anvar released a statement that he was cooperating with the investigation, and essentially denying the claims. “I welcome the independent investigation, respect that the women who have come forward should be heard, and will make myself fully available to participate in the process as appropriate so that I may refute these very serious claims that strike at the core of what I value,” he said, according to Deadline. This seems like a boilerplate response cooked up by a publicist and no doubt a team of attorneys, and tells us nothing while denying any responsibility.

It’s difficult to see how Anvar could remain part of The Expanse. The show has a wildly passionate and dedicated fanbase—it was Expanse fans who helped save the show from cancellation and saw it get picked up by Amazon Prime Video—and fans have been united behind supporting those accusing Anvar of misconduct. They’re not like to sit quietly if the studio tries to brush this under the rug—but I’d like to believe that The Expanse as a whole is far better than that.

The smart, progressive, gorgeously diverse show is the vanguard of science fiction on television, and Anvar’s alleged behavior stands as an antithesis to The Expanse’s ethos both onscreen and behind the camera. As star Shohreh Aghdashloo, who plays Avasarala, wrote on Twitter, “The Expanse team is one that stands for and reflects diversity, equality and respect on the set and beyond.” The cast and crew have long represented their production as a loving, supportive family—rare enough in the world we live in, let alone on a television set.

Leaving aside the far more serious allegations leveled at Anvar, even just the evidence of his crass texting and apparent targeting of fans and cosplayers with inappropriate attention should be enough to see anyone relieved of their job. How in good conscience could any convention invite Anvar as a guest now, how could he sit beside his castmates in interviews for the show? How could The Expanse risk exposing future actors, crew, and fans to Anvar’s potential misconduct? The abuse of his position and power appears to be backed up by ample evidence. It’s an untenable situation.

It’s also difficult, and upsetting, to imagine The Expanse without Alex. Alex is one of the four core characters on the spaceship Rocinante, and it’s hard to see that the role could be recast. On the other hand, the character, established in Corey’s books, is also difficult to write off and replace considering the canonical role he has to play in the series.

The show has recast roles before, such as Avasarala’s husband Arjun, but this was a relatively minor character. Would the cast and fans accept an Alex played by a different actor? The fifth season of the show saw production halted by the pandemic, but shooting had already wrapped; this is a season that obviously had planned to feature Alex, and thus, Cas Anvar. He’ll be in the show’s fifth season unless something changes (replace all of Alex’s scenes with Christopher Plummer?), but any decisions on the sixth will be pending the investigation’s conclusions.

There are unlikely to be any easy answers here for The Expanse going forward. But as the wise and worthy Expanse fandom reminded on Reddit, “While we are passionate about The Expanse, absolutely no television program is more important than another person’s safety. Care about others, then care about the future of the show.”