Some of My Absolute Favorite Things About Animal Crossing: New Horizons to Celebrate Its Upcoming Anniversary 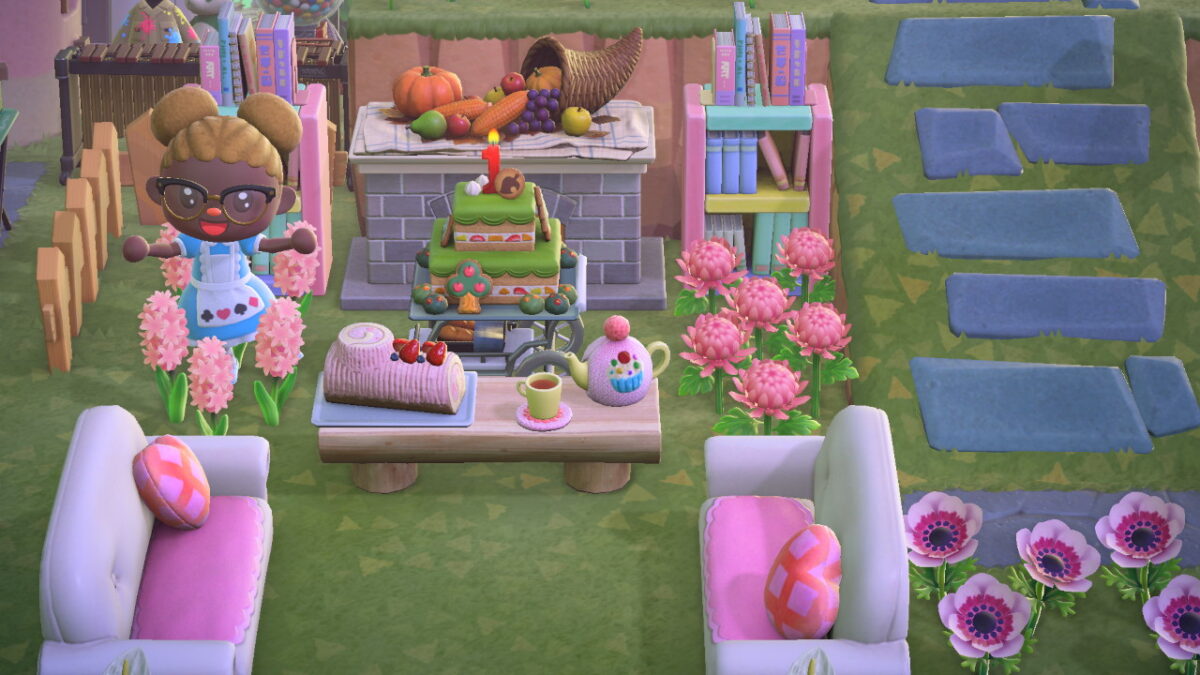 March 20th will be the one-year anniversary of Animal Crossing: New Horizons, the game that single-handedly made 2020 more bearable. That may sound like an exaggeration, but for a lot of people (myself included, even if I got the game about two months after it was released) this island paradise became a stress-free place where the biggest threats were wasps, scorpions, and tarantulas. It sounds scary, but honestly, if you get stung you wake back up at your house so … shoulder shrug emoji.

To celebrate the anniversary, Nintendo sent everyone a cake which I, immediately, made room for in my Pink Gundam Cafe.

I have a Pink Gundam Cafe.

You can just DO that in Animal Crossing. 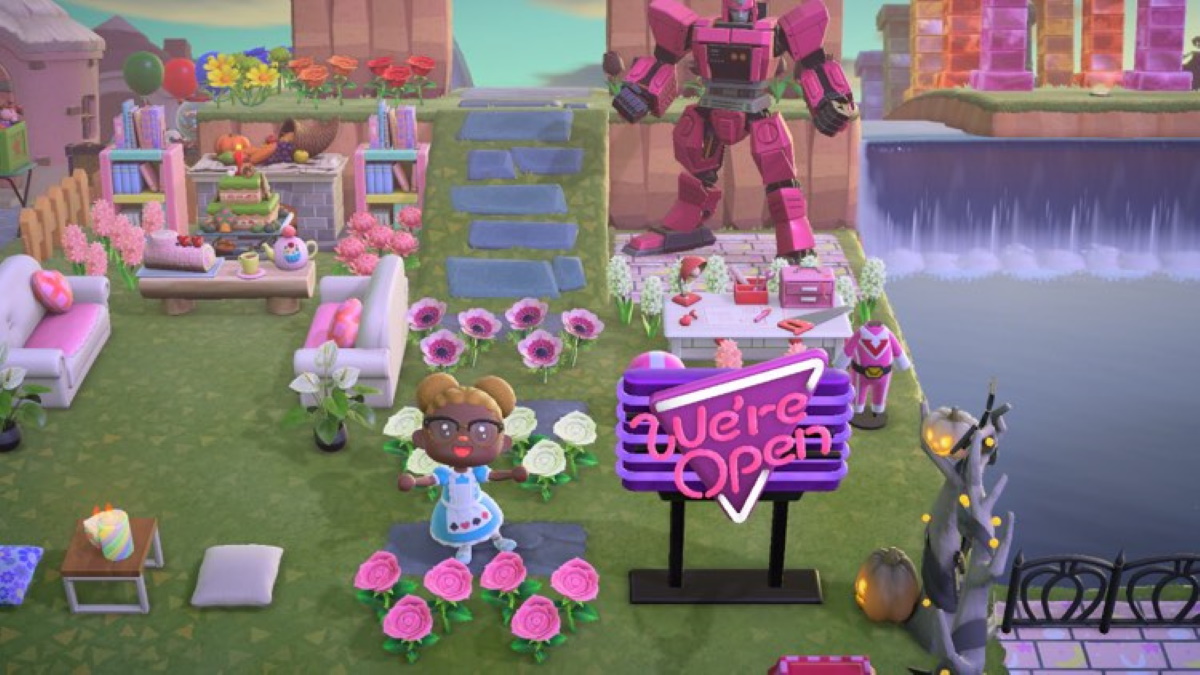 Along with the cake came the long-awaited addition of more design slots! With those slots comes the ability to design on umbrellas, small flags, uchiwa fans, and photo stands. You can also access the Custom Design Portal that’s in the Able Sisters shop on your phone, which means you don’t have to rush to download a design before 9 PM anymore. Both of these updates require Nook Miles.

March 26th will bring about even more updates, which you can check out over on Nintendo’s blog.

To celebrate a year full of island hijinks, I thought I’d list off some of my favorite experiences when playing this game. Full disclosure: this is my first Animal Crossing game. I’d heard of the series, but I’d never gotten into it until New Horizons. So if anything I list is a regular staple of the series, I um, had no idea, since I just met Tom Nook last year, lol. 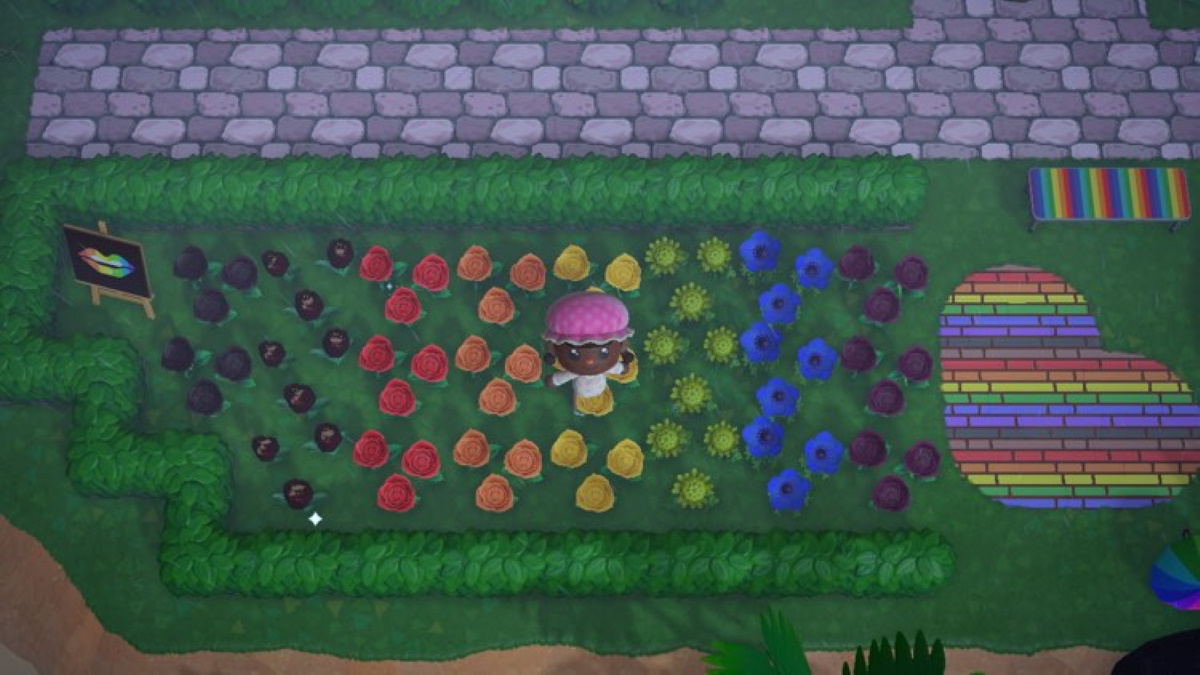 When I got the ability to make custom designs my immediate goal was to make parts (or all) of my island as gay as possible. First came the hearts, then came the galaxy brain moment of making a rainbow out of the flowers. Thanks to some friends who’d already done a ton of gardening on their islands, I got to make my entrance faster than I expected. 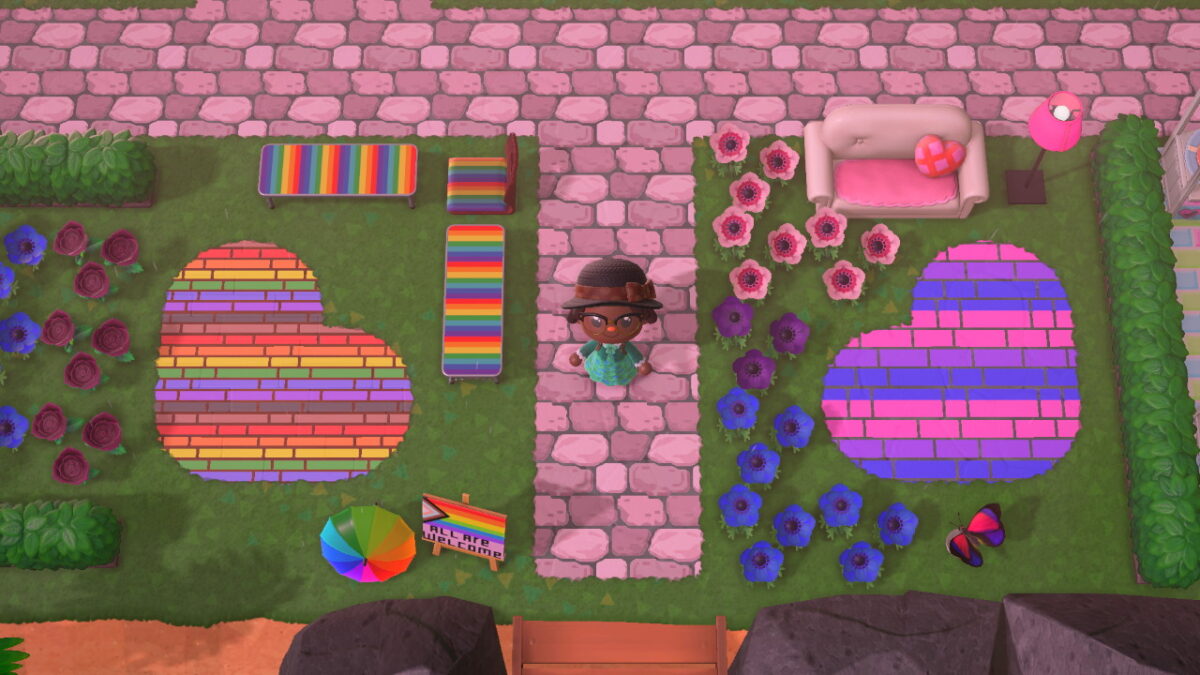 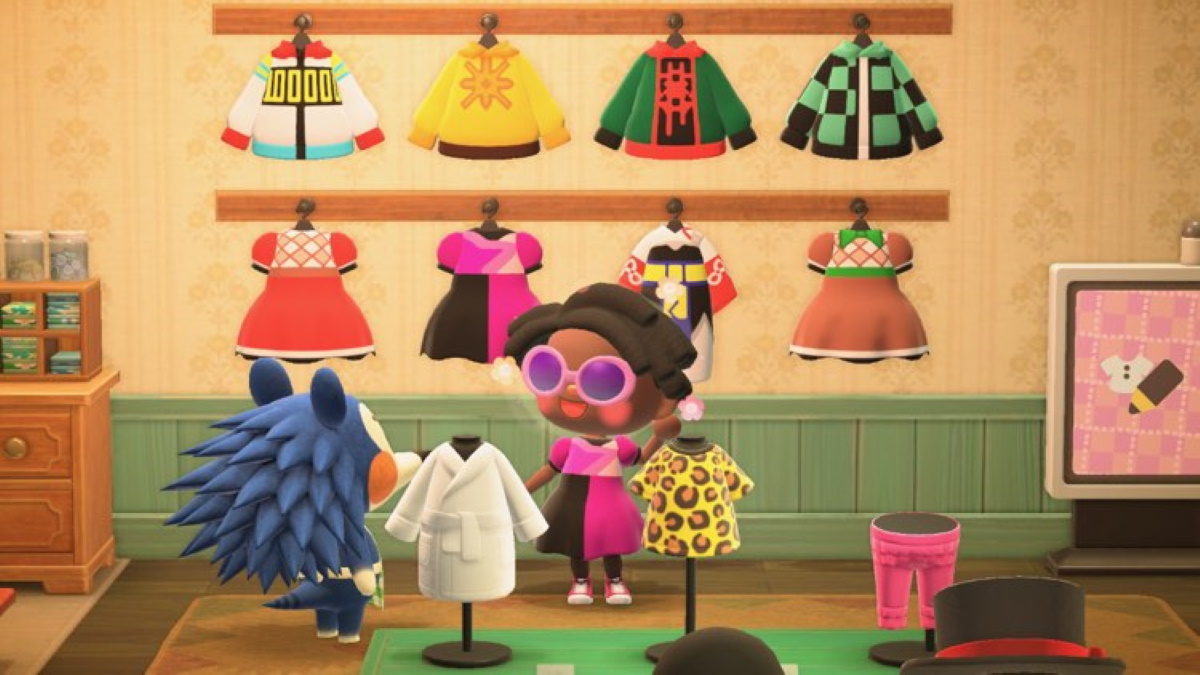 One of the first things I did when I got this game was make a bunch of designs. I’d seen so many online and I knew I wanted to do the same. 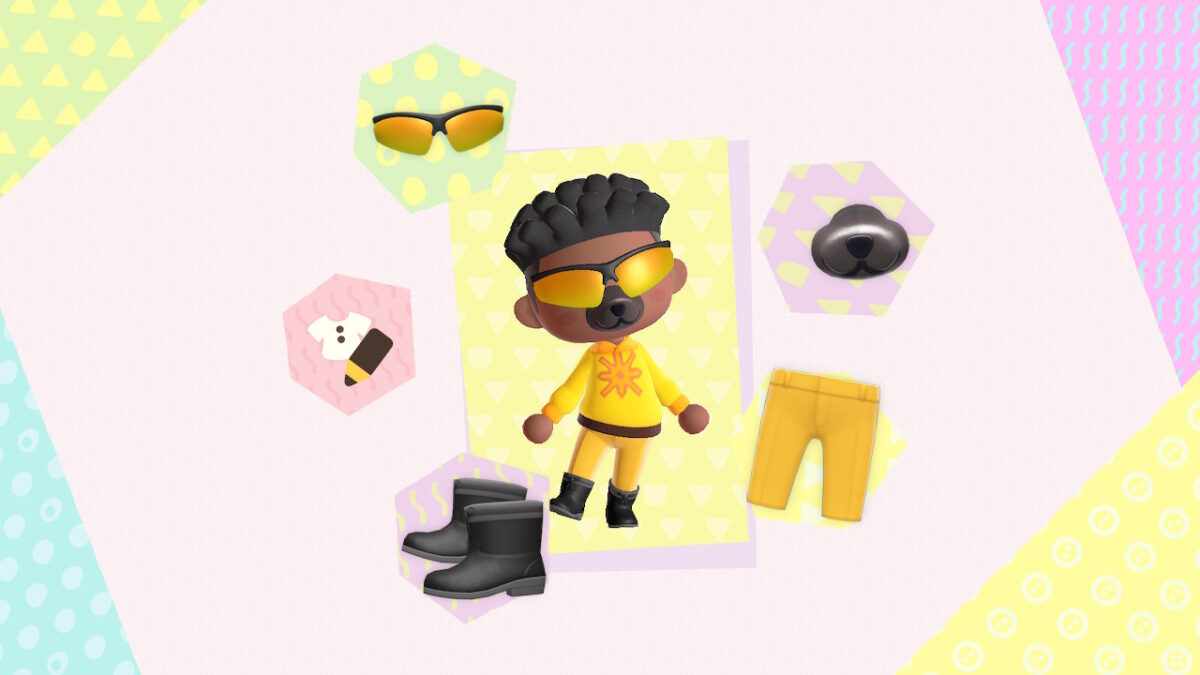 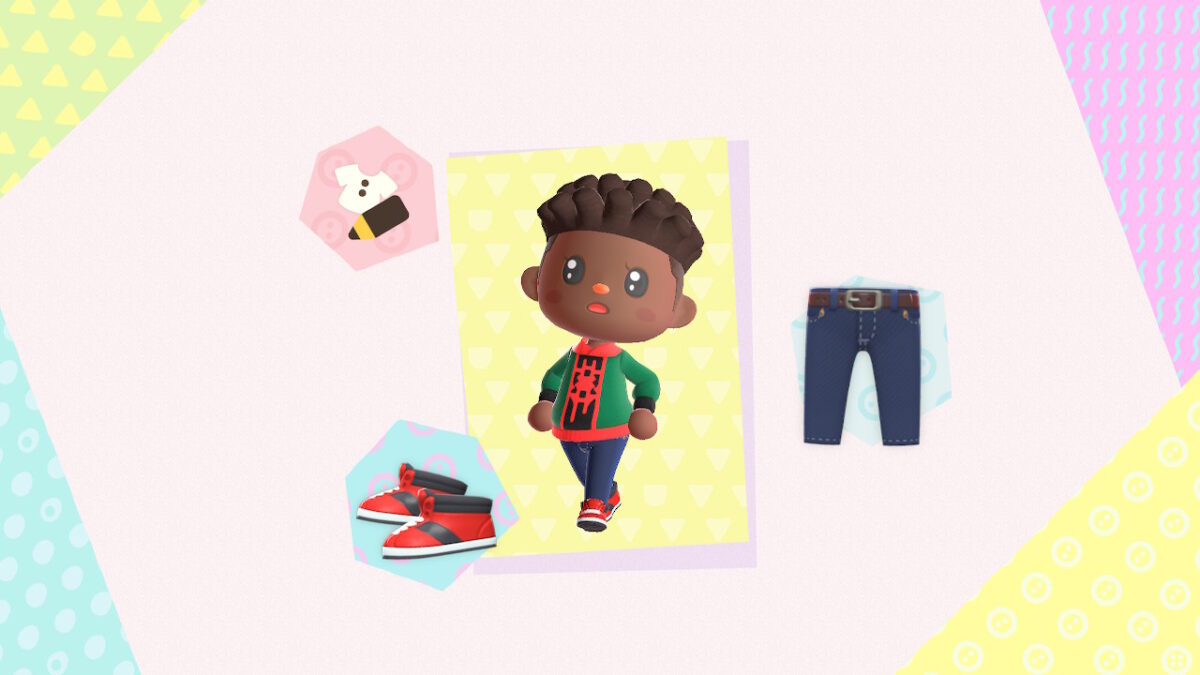 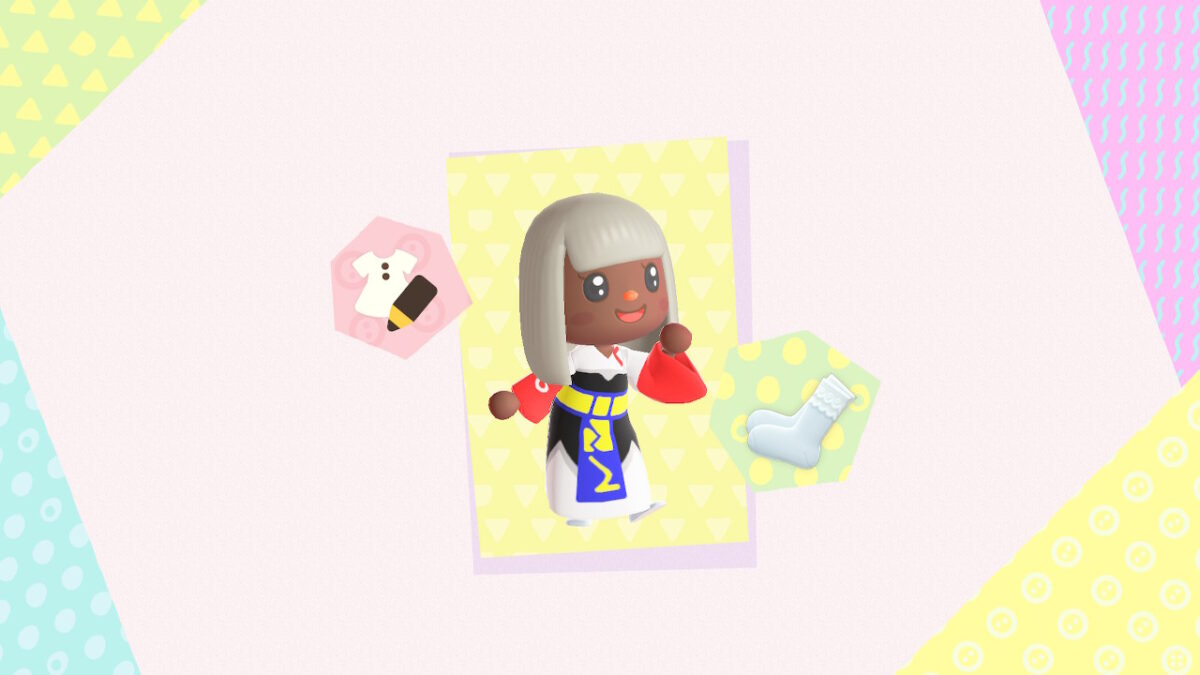 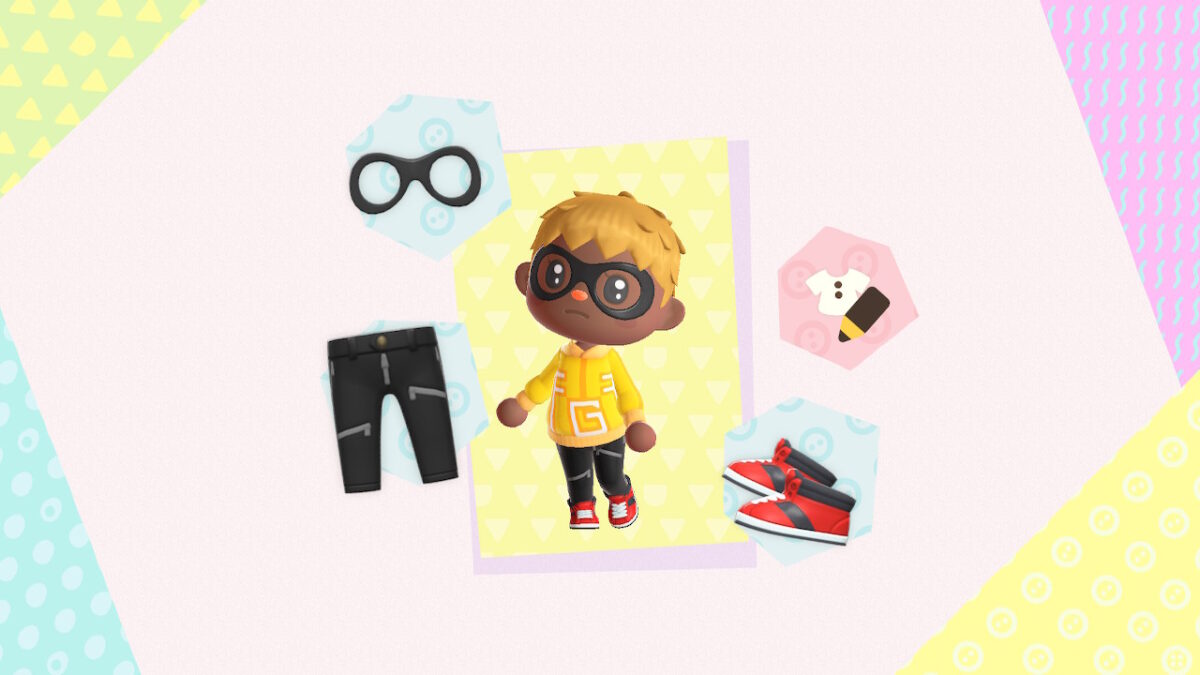 Of course, some days I’d just do closet cosplay and use whatever was available at the Able Sisters! 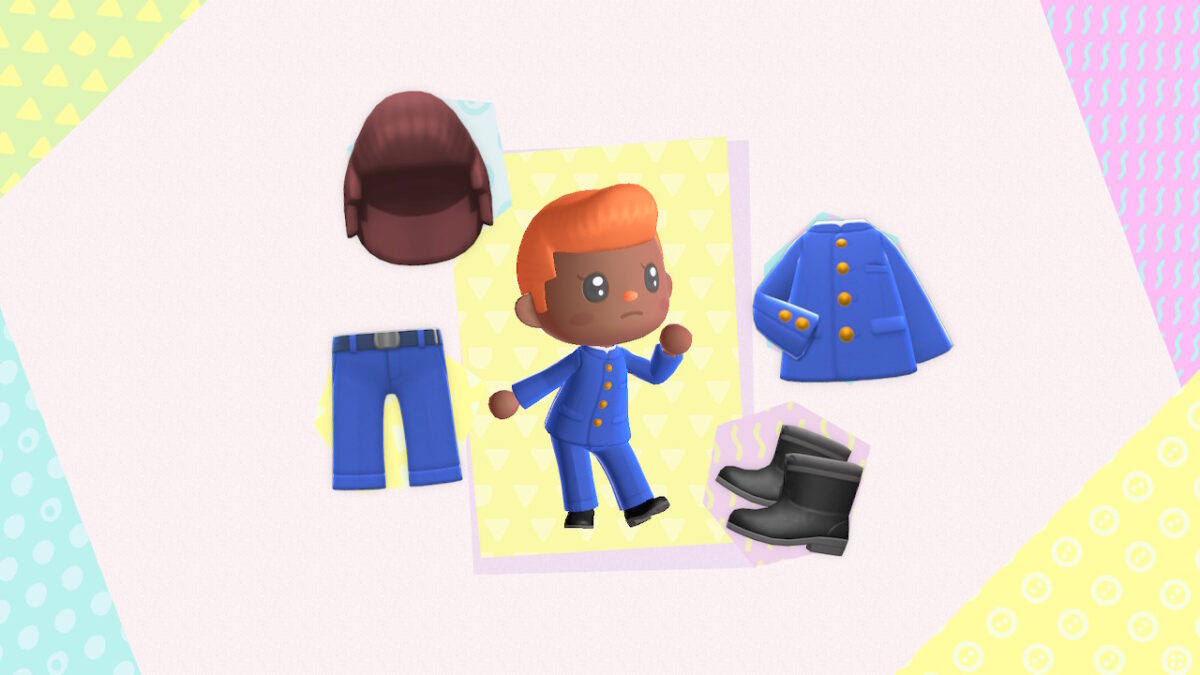 I also did some of my OCs from my self-published, illustrated novel series about a team of Black, queer magical girls. There are two books so far! 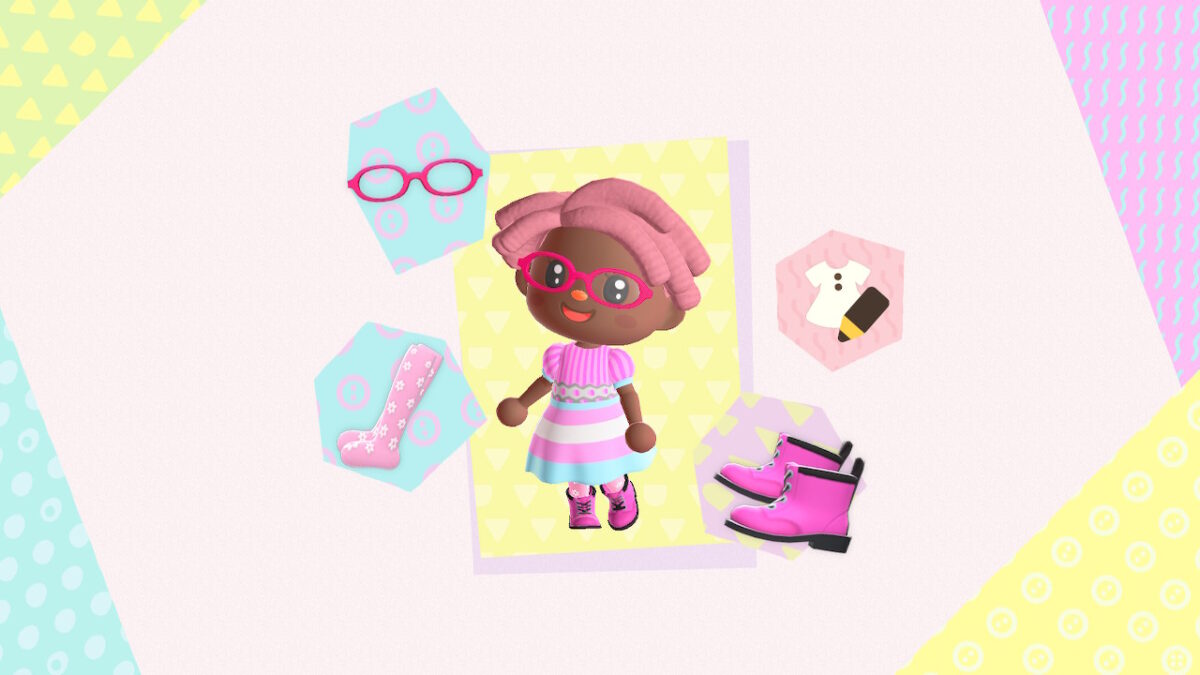 And sometimes, I’d have cosplay date nights with my wife. 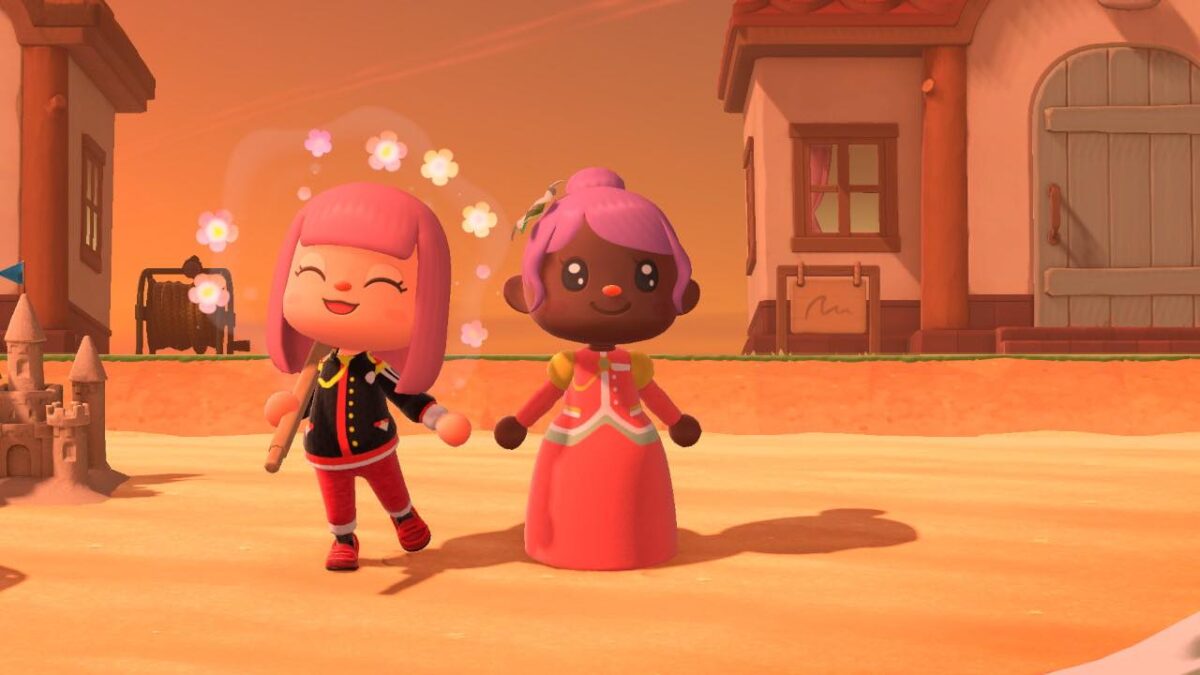 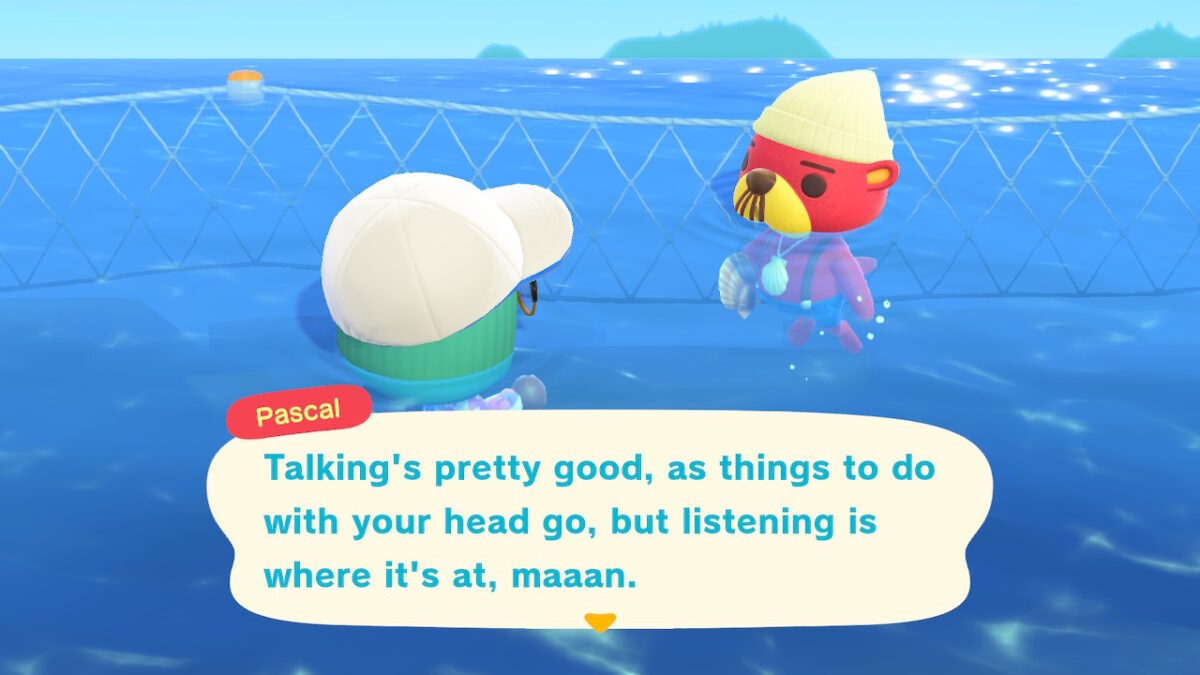 I have nothing to add. Thanks maaan. 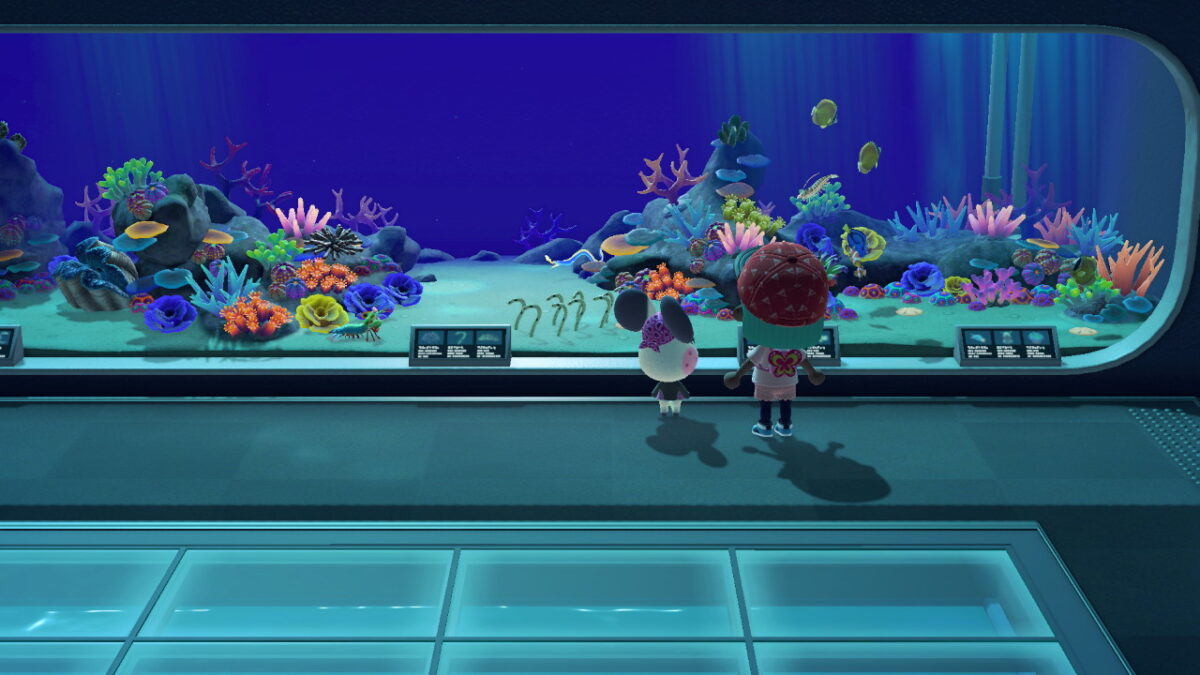 I have a lot of favorite spots on my island, some created by me, others that are just part of the game. Out of all of them, I still love visiting the aquarium the most, especially if one of my villagers is there, too.

It’s also fun to see where your “catch of the day” ends up being placed in the aquarium. 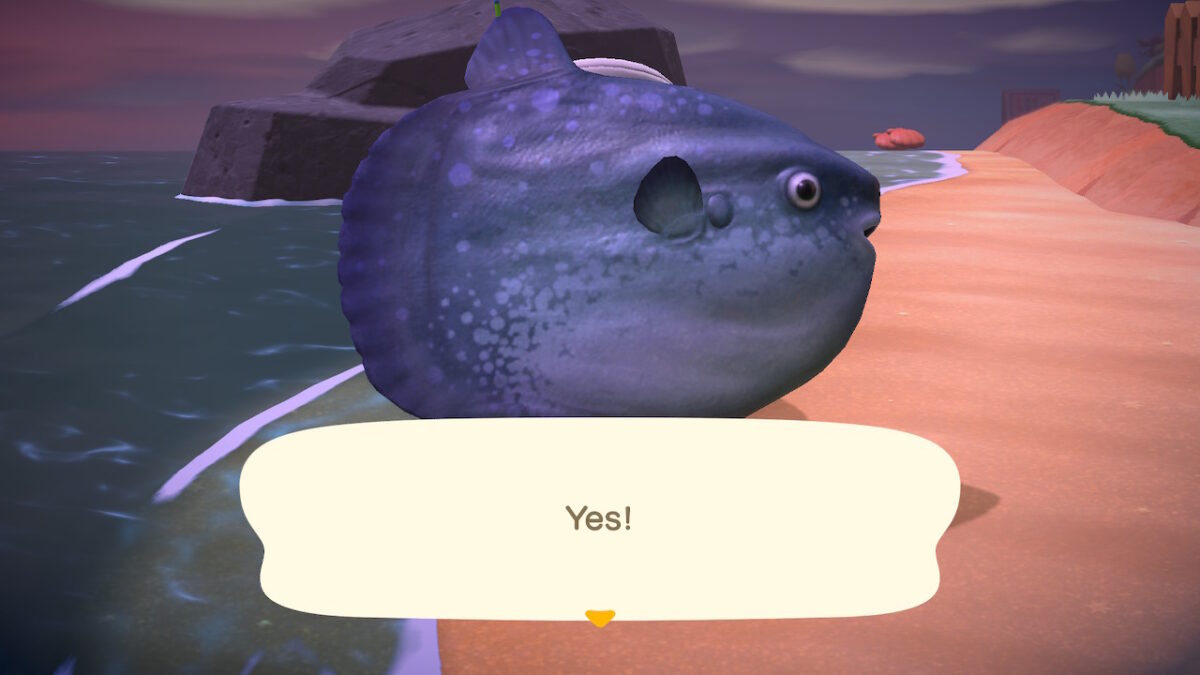 Real talk: I’d actually never seen this fish before UNTIL I played this game. Hello there, Ocean Sunfish! 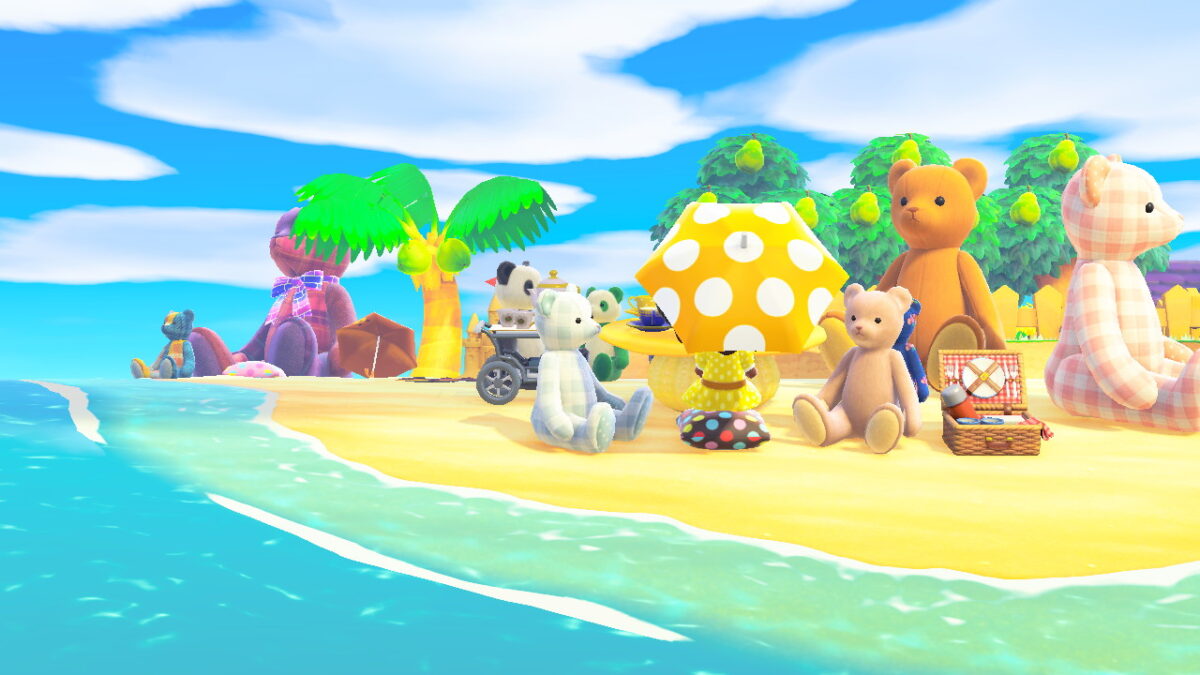 With the aquarium being my favorite spot that’s in-game, it’s only fair to show the spot I created that I love the most. My teddy bear picnic area was one of the first spaces I made and it’s been here ever since. Even with me having a spa area, a hair salon, and the new Super Mario Bros. theme area, I just love this section of my beach.

It’s also next to the unapologetically gay area, so when you show up on my island, you see rainbows and bears. 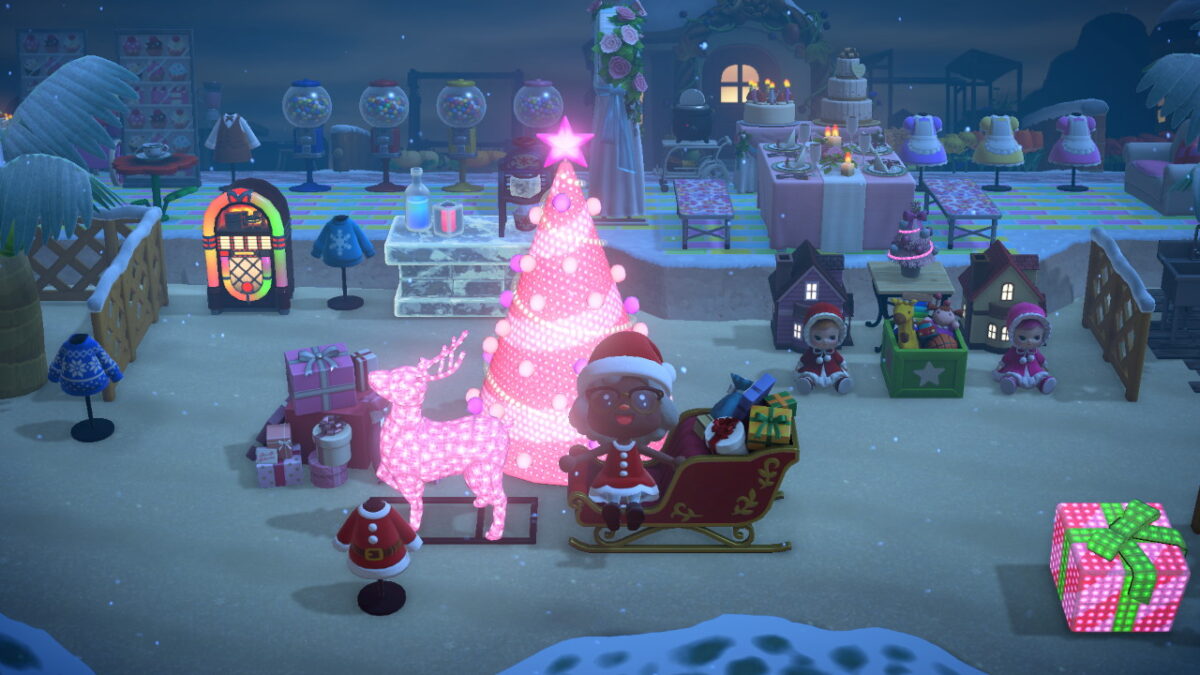 All of the holiday events. The villagers throwing me a party on my birthday. It all became a fun thing to look forward to, not just the day of the event, but the updates that would inevitably hit beforehand. 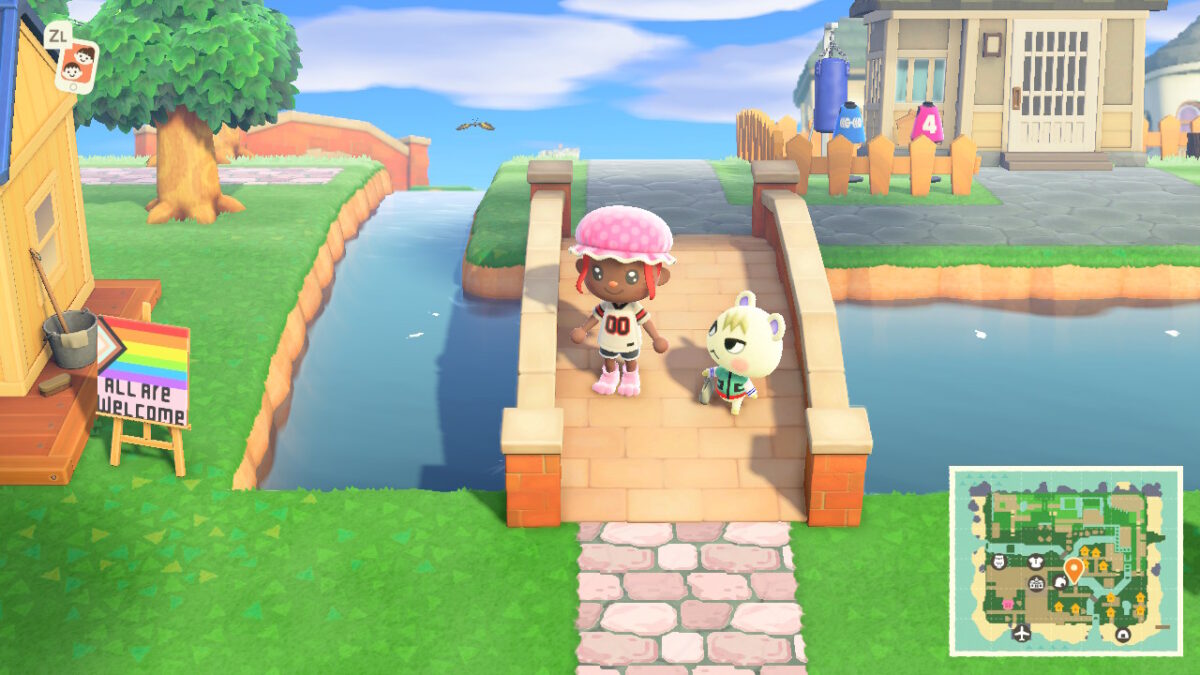 Listen. I know Marshal can be anyone’s villager, but does YOUR Marshal wear a Deku hoodie while carrying a purse?

Honestly, I love all of my villagers so much … until I get their photo, then depending on who it is I might not put up too much of a fuss if they ask to move. 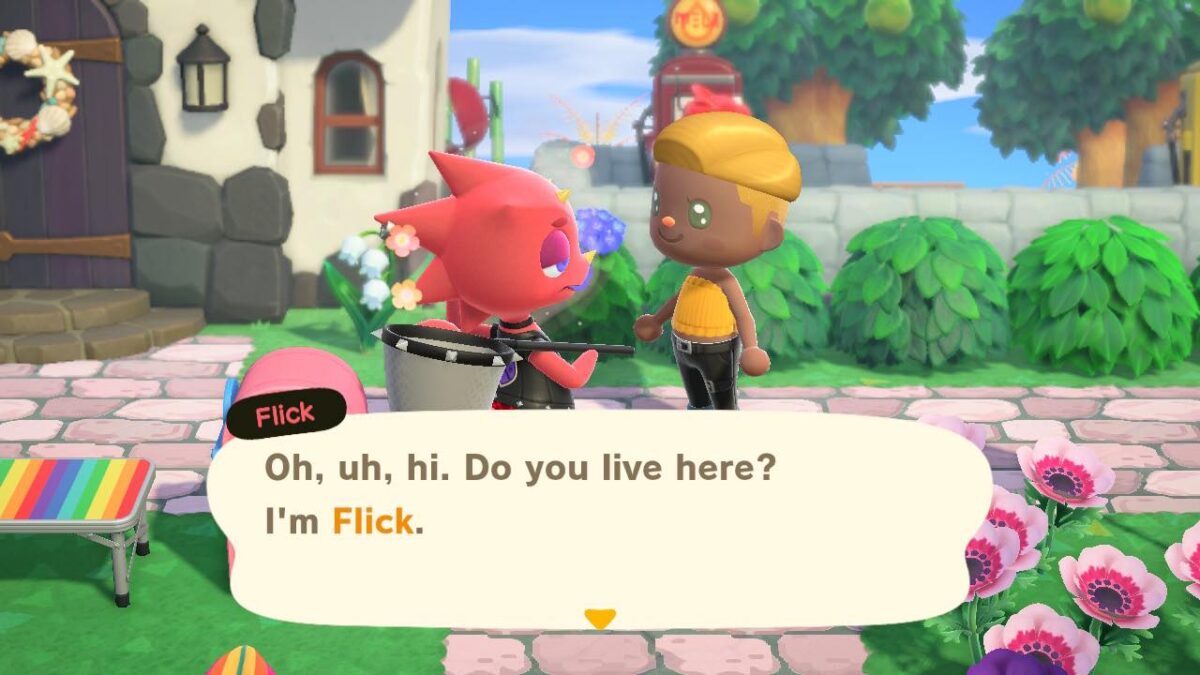 Listen. I’ve made my Flick and CJ agenda pretty clear. That being said, I kinda love that you can expect a new visitor on your island every day (save for Saturday, which is for K.K. Slider, and Sunday, which is for Daisy Mae). I also adore that some of them have entire backstories? Like the Able Sisters having this somewhat angsty saga with Sable slowly opening up to you and telling you about their parents, or how Tom Nook made a snide comment about Redd and his “cousin discounts,” leading to all sorts of headcanons about them being ex-boyfriends. Celeste will tell you celestial facts if you give her a fragment, and Leif just wants you to be happy.

I do wish Gulliver would go out and find his own damn phone, though. My bird, it’s RIGHT THERE in the water.

The background music in-game AND the K.K. Slider songs. You… don’t wanna know how many music players I have on my island playing Bubblegum K.K. 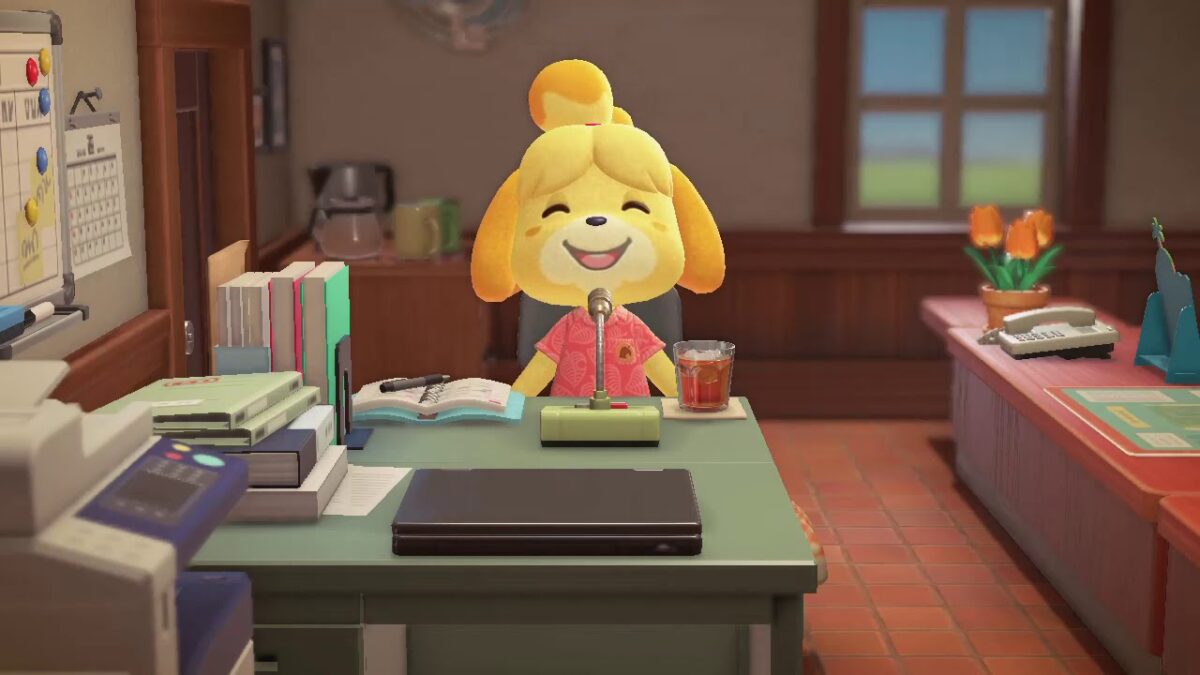 I dunno, something about starting the morning with a chipper pup who always ends her announcements with a smile meant a lot all throughout 2020. Whether she actually had news or was just telling you about finding a sock, it was a bright spot in the day.

To be honest, I have a lot more I could share, but I think this is a good reflection of the hours and hours I’ve logged into this game, and how much I’ve enjoyed it during its year-long run. I look forward to seeing what Nintendo has in store for our future island adventures. 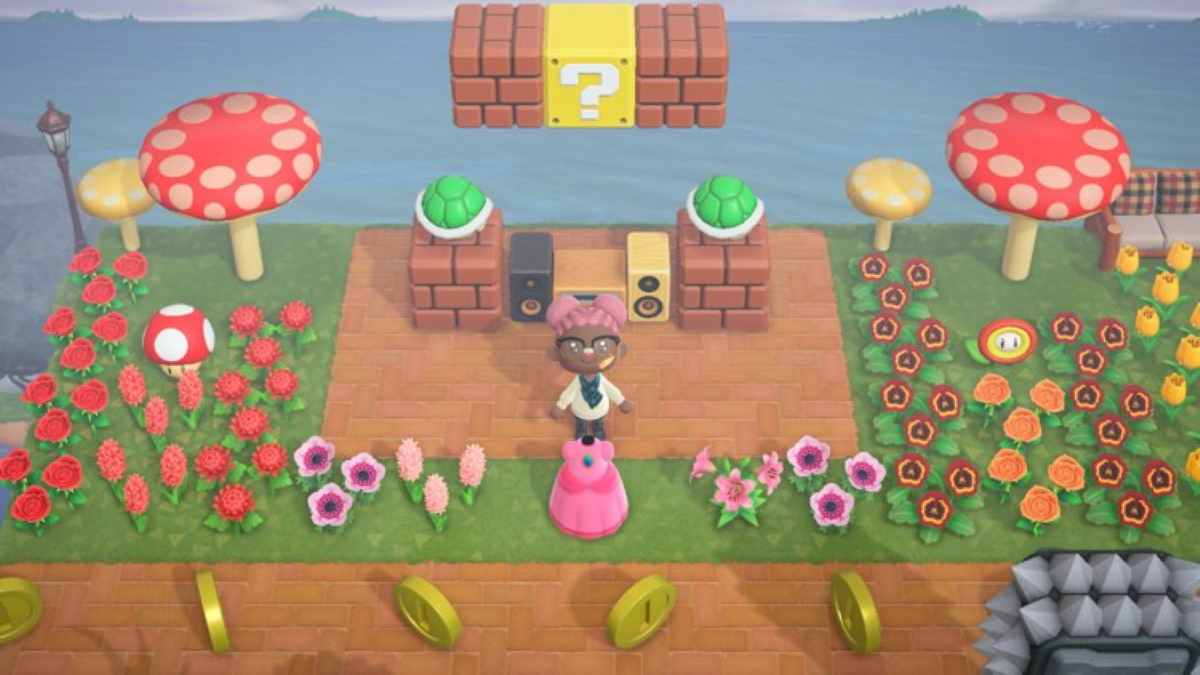