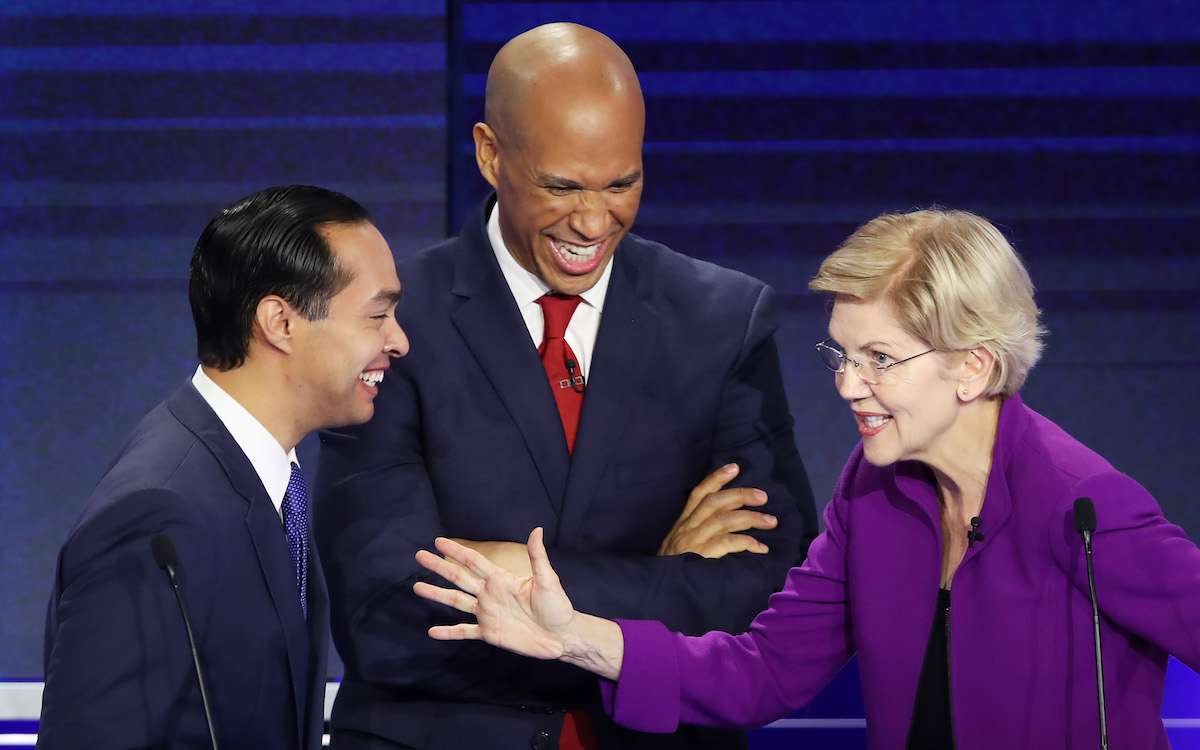 It all started at the first Democratic presidential debate on Thursday, which saw Elizabeth Warren, Cory Booker, Julian Castro, Beto O’Rourke, and a host of other candidates in the enormous Democratic field vying for attention. Nearly all of the candidates touted their pro-choice records and stances, although Castro immediately stood out by calling for reproductive justice, specifically, and acknowledging that abortion and reproductive rights affect LGBTQ people, too.

His invocation of reproductive justice—which comprises abortion and reproductive rights, as well as real-life access to all the resources necessary for autonomy over one’s body, life, family, and community—certainly impressed many activists on Twitter. Warren stood out, too, referencing her bold plan to codify Roe v. Wade into federal law and prohibit the anti-abortion state-level restrictions that have spread across the country like wildfire recently.

Fervent support for reproductive rights continued into the second round of Democratic debates, which saw Joe Biden, Kamala Harris, Bernie Sanders, Kirsten Gillibrand, and others take the stage. Prior to the debate, Harris and Gillibrand had collaborated on legislation to investigate disproportionately high maternal death rates for women of color, and released ambitious plans to fight back against abortion bans and protect reproductive rights.

Meanwhile, Biden had faced backlash for originally coming out in support of the Hyde amendment, a discriminatory law that imposes socioeconomic barriers on abortion access and treats abortion differently from other healthcare services by banning federal funding from covering abortion care. In a similar vein, Sanders has previously taken heat for endorsing an anti-abortion Demcocratic candidate in Nebraska, and defending this stance by dismissing abortion as a “social issue.”

On the debate stage Thursday night, Gillibrand led on the issue by criticizing male Democratic leadership’s history of putting abortion rights on the back-burner and playing defense when we should be playing offense. “Compromises have been made on our [women’s] backs, and that’s how we got the Hyde Amendment,” Gillibrand said. “I will guarantee reproductive freedom no matter what.”

Overall, it was a refreshing—and downright necessary—change from all previous debates, which have represented abortion and reproductive rights as tangential, if they were included at all. But recent abortion bans in states like Alabama, Georgia, Missouri, and more have underscored the increasingly dire nature of reproductive rights, making this an inescapable issue in a debate within a political party that identifies as pro-choice. The ambitious plans and substantive discussions mark a critical step forward, but while we’re at it, hopefully in the coming debates—and suffice to say, there will be quite a few—we’ll see candidates more comfortable with actually saying the word “abortion,” and foregoing the usual vague platitudes.

In case you weren’t already anxious about what the future holds for abortion rights, news from Nothern Ireland, where abortion is illegal in all cases except when continuing the pregnancy puts mother’s life in danger, from this week should fix that. A mother currently faces criminal charges for obtaining abortion pills for her then-15-year-old daughter, who was impregnated in an abusive relationship in 2013. The mother could face up to five years in jail.

As some abortion rights activists have pointed out, this news—which isn’t at all unlike several documented cases of American women jailed for self-managed abortions or miscarriages—speaks to a dangerous but under-discussed likelihood in a post-Roe v. Wade America.

Unlike pre-Roe America, today, there are safe options for self-managed abortion through medication abortion. In other words, the true challenge that women and pregnant people may face won’t necessarily be physical safety and the threat of unsafe back-alley abortions, but criminalization of their bodies, and both surveillance and legal repercussions for the outcomes of their pregnancies. Because a society where abortion is illegal means the end of the right to bodily autonomy, but also the right to privacy in one’s pregnancy and body.

The future of abortion rights is, certainly, about abortion, but in many ways, it’s also about so much more. It’s about who will and won’t have access to life-saving healthcare across racial and socioeconomic lines; it’s about privacy and citizenship, whose humanity matters and whose does not. As a court in Northern Ireland presides over the case, it’s critical that we take note of what the future could hold in the U.S., at the rate abortion bans are passing and anti-abortion judges are being confirmed.

This week, a circuit court judge in Missouri announced that the temporary injunction that allowed the state’s last abortion clinic to remain open, despite the anti-choice state department’s refusal to renew its license, has been extended to the end of this week on June 28. This is, of course, good news—but uncertainty lingers, as a final decision about the clinic’s fate remains in the air.

If the Planned Parenthood clinic in Missouri loses its ability to offer abortions, Missouri would be the first state in the nation without an abortion clinic. But that’s not to say abortion care is accessible everywhere else, or that just one abortion clinic—a dire situation seven states including Missouri face—is enough. Almost 90 percent of counties across the country have no abortion clinics, meaning unsaid numbers of women and pregnant people are traveling miles—many of them likely traveling out-of-state—and paying exorbitant travel and lodging fees, just to access their human right to abortion care.

In the last seven years, hundreds of abortion restrictions have passed on the state and federal levels, and the number of abortion clinics across the country has been steadily dropping to record lows in recent years, due to a wide range of jarringly deceptive laws. Many of these laws, known as TRAP (targeted regulation of abortion providers) laws, involve imposing medically unnecessary, expensive, and highly inconvenient requirements on abortion clinics, such as hallway width requirements and nearby hospital admitting privileges, under the guise of concern for women’s safety and faux concerns about abortion safety.

Of course, what these laws ignore is that abortion is perfectly safe—safer than plenty of everyday health services, such as colonoscopies or varying dental surgeries—meaning hallways that can fit stretchers, or admitting privileges at nearby hospitals, are entirely unnecessary. In contrast, the gaps in abortion access that are caused by clinic shutdowns are the real threat to women’s health and safety.

As we await the court’s ultimate decision about Missouri’s last abortion clinic in the coming weeks, it’s important to remember that both can be true: It’s critical that this clinic stay open, and even if it does stay open, the state of reproductive healthcare access will remain rocky, at best.