“Abortion” Is Now the Second Search Result for “Murder,” Due to Apparent Googlebomb | The Mary Sue

“Abortion” Is Now the Second Search Result for “Murder,” Due to Apparent Googlebomb 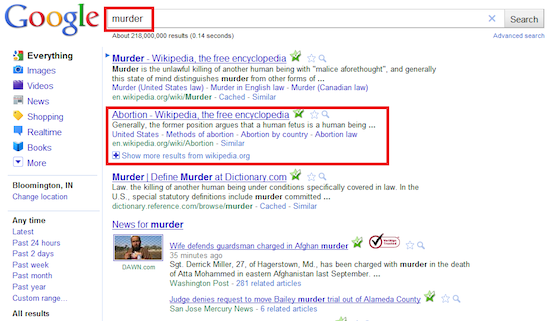 Googlebombing is the practice of gaming Google search results by systematically coordinating links from a number of sites to a given webpage to bump up its ranking within a given Google search, defined by the anchor text. For instance, if a lot of people put the link <a href=”http://www.wafflehouse.com/”>carrots</a> on their webpages (which would appear as carrots), then if they managed to slip past Google’s filters to prevent such abuse, the Waffle House webpage could rank highly in a Google search for “carrots.”

Though people have all sorts of reasons to coordinate Googlebombs — for business, for humor, for competition — many in the past have been historical in nature: One of the most famous involved pushing George W. Bush’s White House webpage to the #1 search spot for “miserable failure.” That looks like what’s going on here: If you Google “murder,” the Wikipedia page for “abortion” is the #2 result. As Boing Boing puts it, “However you feel about abortion, this Wikipedia page is pretty clearly not the second-most relevant document regarding murder on the entire English-speaking World Wide Web.”

Google has become more zealous about this sort of thing than they were in the “miserable failure” days: Semi-relatedly, they recently announced that they were taking action against so-called content farms to improve search results. It wouldn’t be a surprise if this result changed fairly quickly, but it’s still surprising that a Google result that gets more than 13 million searches every month is still subject to apparent manipulation.