A Woman’s Place Is In the Revolution, and More Lessons From the Women’s March on Washington 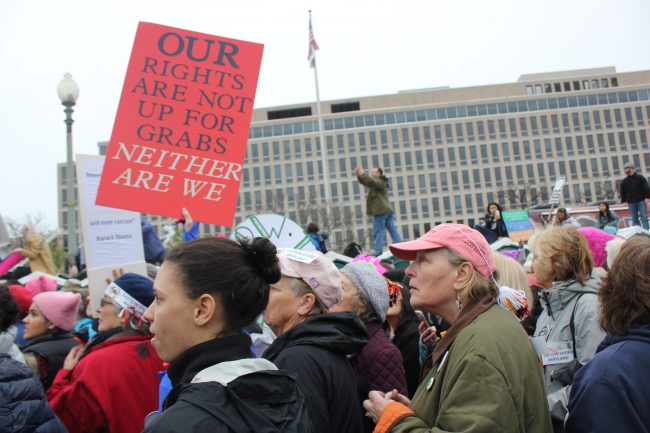 Growing up, I was always taught that the word protest or demonstration was in fact synonymous to violence. I was brought up in Bhopal, a small city in the central part of India, where the sight of women rallying out on the streets wasn’t acceptable. My parents frequently told me to not be too loud, to crush my rage, to compromise and accept, and to “behave like a woman.” I, on the other hand, found it difficult to suppress my desires, my dreams and my vision.

This past Saturday, I stood quietly among hundreds of thousands of people, not really grasping the comfort of the little place where I was stuck, which was actually pretty tight. Every time I looked around, I saw some wide-eyed smiles, colorful posters and signs, and vibrant pink hats. I saw women basking in the glory of being women, standing up for each other and owning their rights. And then I bumped into someone holding a poster that read, “A woman’s place is in the revolution.” 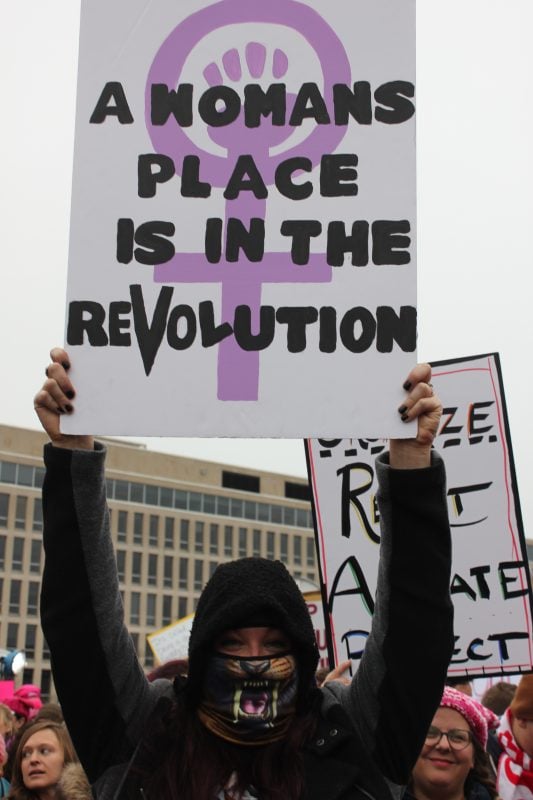 My parents always said that a woman’s place was in the kitchen. I always resisted. Almost everything I worked toward had a different connotation because of my gender. They’d tell me, “You shouldn’t go out late at night, you need to dress up like a lady, and marriage is more important than education.” And almost every time, I found a way to revolt. I was the rebel. I had to speak out.

When I told some of my friends I was going to the Women’s March on Washington, they asked me, “How would that change anything?” For many, the very idea of a public protest seemed irrelevant—that’s what I grew up believing. Why is it so appealing to get up early in the morning on a weekend, travel for hundreds of miles, endure the harsh winter for hours, and shout out loud?

The first demonstration I ever attended was an undocumented immigrants’ protest on a chilly February morning in Chicago. My Palestinian-American friend couldn’t fathom that this was the first time I was seeing thousands of people on the streets fighting for their rights. As I struggled to capture video clips, running around with my camera and a tripod, hanging on to my winter hat and gloves, I felt something shift inside me. I sensed a strange sort of liberation. 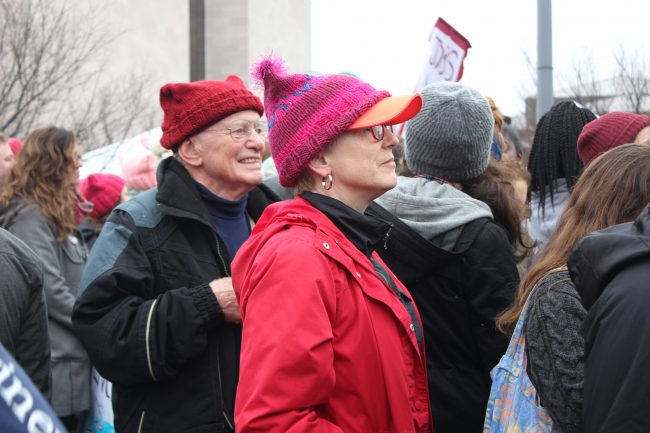 A few weeks later, I covered the Trump protest in Chicago, even though my father called and explicitly told me to stay inside the house after seeing the groundwork for a massive demonstration against Donald Trump on an Indian news channel. My friends, who knew I’d go nonetheless, constantly sent me messages to stay safe. Once again I sprinted in different directions, interviewed several protesters, and saw the coming together of people from different races, religions, and backgrounds. By the end of the day, I felt rejuvenated.

For me, the idea of a march or a demonstration gradually changed from being something that could turn violent to being something that gave me an adrenaline rush, and it taught me that it was acceptable to speak out despite your gender, race, religion or background. At every rally I covered, I saw hundreds and thousands of people just like me, reclaiming their rights and expressing their ire.

When I was little, my mother would get worried if I tanned in the harsh sun. “Darker girls don’t get good husbands,” she’d say. My father didn’t approve of my male friends, dreading that society might question my character because of them. My actions, my words, and my ambitions went through inexplicable scrutiny nearly every day. I ended up believing I had way too many flaws—until I pushed back against that and learned to embrace my identity. 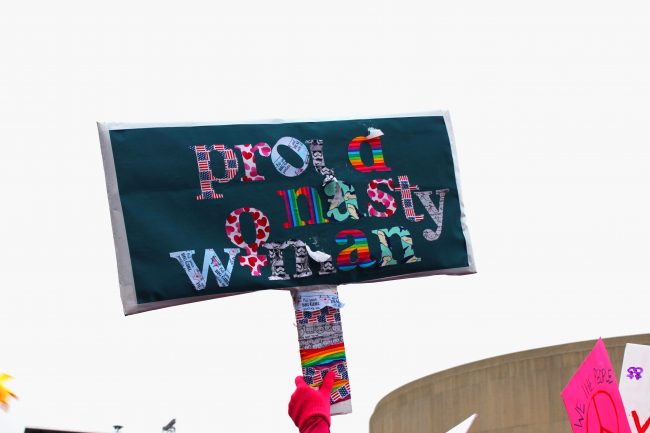 “I am a nasty woman, but not as nasty as racism, fraud, conflict of interest, homophobia, sexual assault, transphobia, white supremacy, misogyny, ignorance and white privilege. I am a nasty woman.” I shoved through the crowd as Ashley Judd’s recitation of Nina Donovan’s Nasty Woman rung in my years. “So if you a nasty woman, or you love one who is, let me hear you say, ‘Hell yeah.’”

After she read the last few lines of what sounded like a much needed feminist reminder, I caught sight of a beautiful beige poster soaring above the crowds. “Women are perfect,” it said, virtually erasing all of those enforced, invisible flaws that upset women all over the world. I took a deep breath and let it sink in. 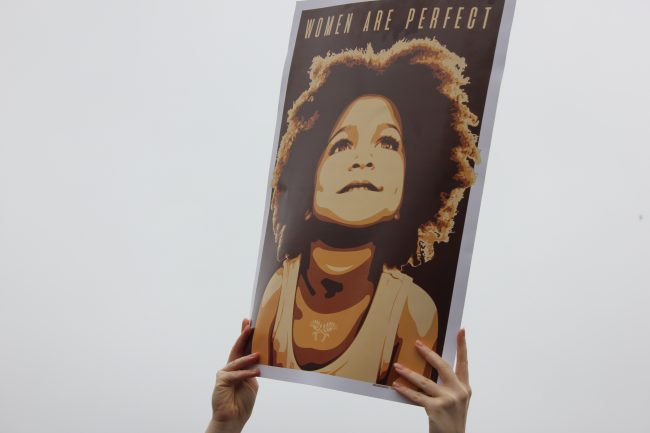 Snuggled with their parents, I saw thousands of children and teenagers, clutching signs that said, “Women matter. Girls matter,” “I am the future,” and “Trump! Stop being rude.” I smiled every time I saw a little kid joining in on the slogans, laughing out loud and marching with their parents. I recognized how their lives would be so different from many others, how at this young age, they understand the value of the freedom of expression. In the years to come, they will know that their gender, race, or religion cannot hinder their growth. They will be confident, they will have opinions, and they will proudly express them. 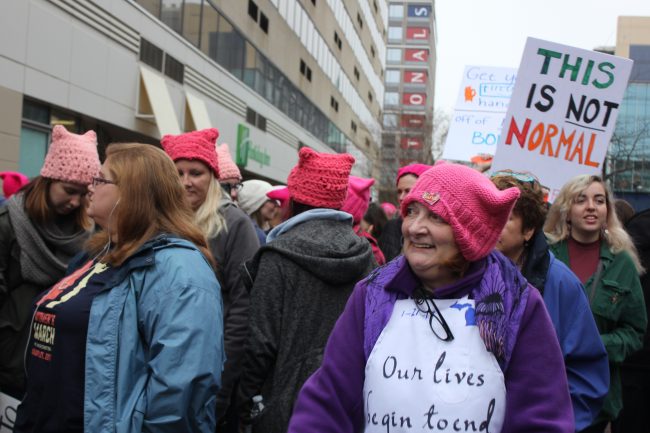 In some way, the Women’s Marches all over the world this Saturday restored my faith in humanity. Even though these massive demonstrations cannot overturn a democratic outcome, they give people the power to speak out and stand up for what they believe in. They help billions of women realize that it’s okay to fight, it’s okay to be loud, and it’s okay to vent when something bears down on your very identity.

Maybe the Women’s March on Washington won’t be able to change policies and leaders, but it can change how people see themselves. Maybe it doesn’t have the power to uproot the current administration, but it has the power to shape lives—and that in itself is an achievement.

Nikita Mandhani is a freelance multimedia journalist currently based in Washington D.C. Her work has appeared in several national and international publications including Vox.com, the Washington Post, USA Today, the Huffington Post, Upworthy, Belt Magazine and the Quint. She can be reached at [email protected]