A Tribute to Jane Fonda and Her 50 Years of Activism 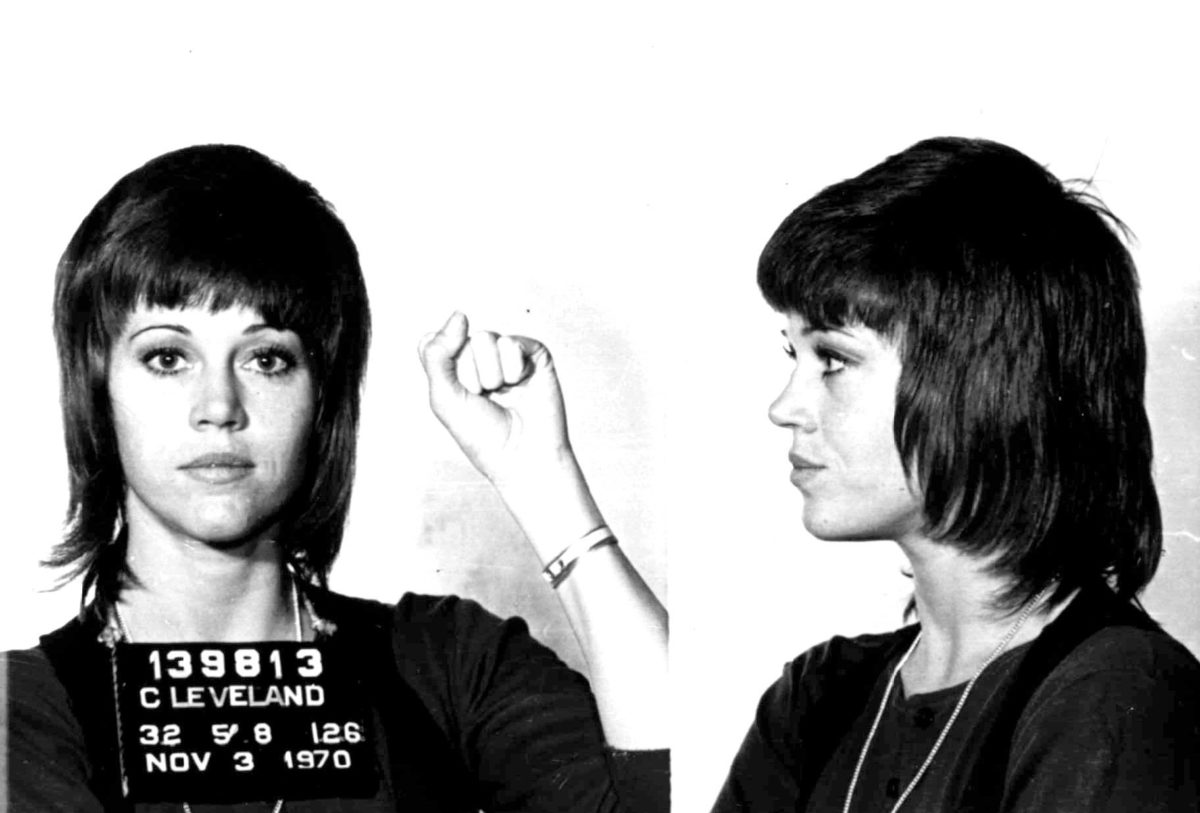 Queen of space, and also my heart, Jane “Barbarella” Fonda, was arrested yet again at climate protests this week. She’s had a few celebrity pals arrested with her, like cast member and Law & Order District Attorney Sam Waterson, and the silver fox zaddy Ted Danson, and at this most recent protest, filmed her BAFTA acceptance speech while being zip-tied and led away.

Her persistent dedication to causes throughout her life really puts my millennial internet activism to shame, so here is a brief overview of her activism through the decades!

In the 1960s and 70s, Fonda was a big supporter of Huey Newton and the Black Panthers. She stated that the Black Panthers were “our revolutionary vanguard…we must support them with love, money, propaganda, and risk” and that “revolution is an act of love; we are the children of revolution, born to be rebels. It runs in our blood.” (- The Socialist Worker)

In 1969, alongside other celebrities of the time, Fonda supported the Alcatraz Island occupation by American Indians. The occupation was intended to call out failures of the government with regards to treaty rights, move towards greater sovereignty, and you know call attention to all of the travesties the American government has committed against them since, well the beginning of time.

In 1970, Fonda went to Seattle to support Bernie Whitebear. They had occupied part of the grounds of Fort Lawton in an attempt to prevent it from being surplussed entirely by the US Army. They wanted to secure a land base where they could establish services for the sizeable local American Indian population. They succeeded and the Daybreak Star Cultural Center was constructed.

In 2017, dovetailing with environmental concerns, Fonda was a vocal critic of the North Dakota oil pipelines being built on Native land. She called out Trump’s mandate directly saying that he “does this illegally because he has not gotten consent from the tribes through whose countries this goes” pointing out that “the U.S. has agreed to treaties that require them to get the consent of the people who are affected, the indigenous people who live there.” (- New York Daily News) 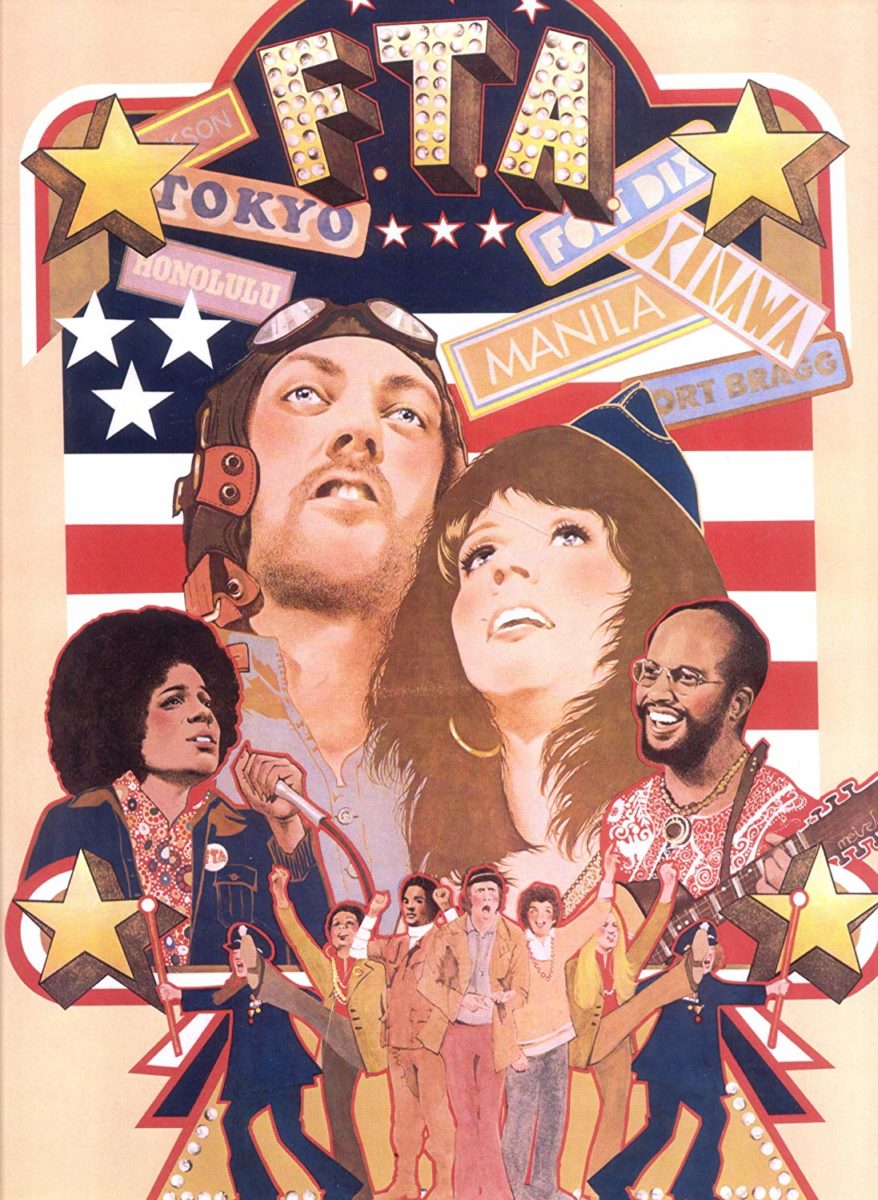 And now the portion of her activism that we are probably the most familiar with – the Vietnam War. Oy. The fun things first: in 1970 Fonda, Fred Gardner, and Donald Sutherland formed the FTA tour (aka “Free The Army” a play on the old troop expression “F*ck The Army), which was an anti-war political vaudeville designed as a response to Bob Hope’s famous USO tour. They traveled up and down the west coast, visiting military towns and aiming to start a dialogue with soldiers about their upcoming deployments. (This was later made into a film F.T.A., which contained frank criticism of the war by current enlistees.)

In May of 1970, Fonda spoke at an assembly at the University of New Mexico about GI rights and issues and was met with an uncomfortable silence – she had been unaware of the Kent State shooting that had just happened. Later that same day she joined a protest march on the home of the university president. The protesters called themselves “They Shoot Students, Don’t They?” in reference to Fonda’s recent film “They Shoot Horses, Don’t They?” Proving that college kids, no matter the decade, are going to have the darkest sense of humor and apply it to every situation. She was also named the Honorary National Coordinator of the Vietnam Veterans Against the War in that same year.

And then she took her two week trip to Hanoi, Vietnam, where everyone and their grandparents will remember, a photo was taken of her clapping and smiling on a Viet Cong anti-aircraft gun. Oof. Later Fonda attempted to explain that she was exhausted at the end of her trip and had been manipulated into sitting on the weapon. She has been horrified and mortified about the implications and lasting hurt caused by the photo.

“Everyone was laughing and clapping, including me … Here is my best, honest recollection of what happened: someone (I don’t remember who) led me towards the gun, and I sat down, still laughing, still applauding. It all had nothing to do with where I was sitting. I hardly even thought about where I was sitting. The cameras flashed … It is possible that it was a set up, that the Vietnamese had it all planned. I will never know. But if they did I can’t blame them. The buck stops here. If I was used, I allowed it to happen … a two-minute lapse of sanity that will haunt me forever … But the photo exists, delivering its message regardless of what I was doing or feeling. I carry this heavy in my heart. I have apologized numerous times for any pain I may have caused servicemen and their families because of this photograph. It was never my intention to cause harm.” (- Jane Fonda)

She also made radio broadcasts on Hanoi Radio throughout her tour, describing visits to villages, hospitals, schools, and other locations that had been bombed and denouncing US military policy. She also visited American POWs and brought back messages to their families. However, she came under criticism for comments she made about whether or not she believed that POWs were being systematically tortured.

Unfortunately, the damage of these moments has been long lasting and earned her the nickname “Hanoi Jane.” The deep seated mistrust and hatred of Fonda by the military continues to this day. There is a Navy academy ritual that consists of one “plebe” shouting out “Goodnight, Jane Fonda!” to which the entire company responds with “Goodnight, bitch!” And in 2005 a Navy veteran was arrested for spitting chewing tobacco in Fonda’s face during a book signing event. Fonda refused to press charges.

In November of 1970, Fonda was arrested upon re-entering the country at Cleveland Hopkins International Airport on suspicion of “drug trafficking.” Turns out the drugs were just her bags of vitamins, go figure! But her mugshot, in which she raises her fist in solidarity, is now one of her most iconic images. In 2013, it was revealed that Fonda was one of 1,600 americans being monitored (via wire taps and what have you) between the years of 1967 and 1973 by the NSA.

Because duh! Fonda has been a longtime advocate for women’s health, safety, and reproductive rights. She has spoken several times about her own sexual assaults and the abuse she (and her own mother) have endured. In 2001, she established the Jane Fonda Center for Adolescent Reproductive Health at Emory University in Atlanta to help prevent adolescent pregnancy through training and program development. She was an early supporter of Eve Ensler’s “V-Day” movement and helped to organize its very first summit in 2002. In 2004 she also served as a mentor to the first all transgender cast of The Vagina Monologues.

In December 2002, Fonda visited Israel and the West Bank as part of a tour focusing on stopping violence against women. She demonstrated with Women in Black against Israel’s occupation of the West Bank and Gaza Strip outside the residence of Israel’s Prime Minister. In September 2009, she was one of more than 1,500 signatories to a letter protesting the 2009 Toronto International Film Festival’s spotlight on Tel Aviv.

Which brings us up to the 20teens! Fonda was critical of Obama’s permitting Arctic drilling and she also marched in a Toronto protest called the “March for Jobs, Justice, and Climate.” She also criticized Canadian Prime Minister Justin Trudeau, essentially calling him a hypocrite for his lax environmental policies. And now her arrests this week in DC!

Truly, Jane Fonda is an inexhaustible machine. She has been working HARD for her causes for the past 50 plus years, meanwhile I have to give myself a pep talk just to get out of bed in the morning! So bless Jane Fonda, because we truly do not deserve her.