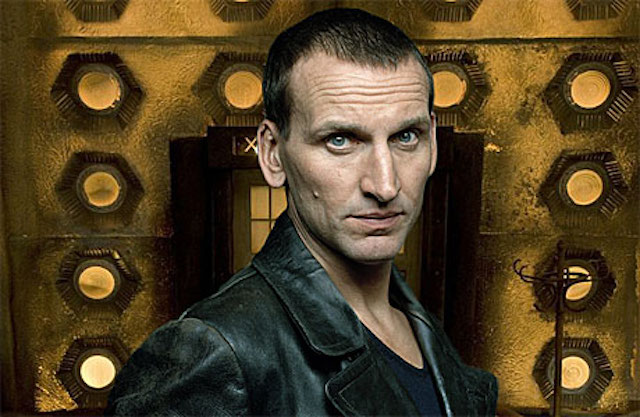 Christopher Eccleston—who just so happens to be my favorite Doctor—was asked what he thought about the first woman to call the TARDIS her own.

In an interview on BBC4 Radio’s Loose Ends show, Eccleston said approvingly of Whitaker as the 13th Doctor, “She’s working class, she’s northern, what can go wrong?” Listen to his response here:

[Ed’s note: our commenter Ray Burns provided further insight into Eccleston’s comment.] Ray points out, “This may have also been a subtle bit of shade thrown at the BBC. Eccleston fancies himself as coming from the working class and he is most definitely from the north. And his … disputes with management at the BBC are supposed one of the reasons why he left after only one season. Eccleston might be hinting that if something does go wrong, don’t blame Whitaker.”

Eccleston joins former Doctors Peter Capaldi, David Tennant, and Colin Baker in praising Whitaker’s casting. Fifth Doctor Peter Davison caught a lot of heat and backlash after he mused at San Diego Comic Con that having Whitaker in the role would mean the loss of a role model for boys. “If I feel any doubts, it’s the loss of a role model for boys, who I think Doctor Who is vitally important for,” he said, as though female Doctors cannot be role models for boys. “As a viewer, I kind of like the idea of the Doctor as a boy but then maybe I’m an old-fashioned dinosaur—who knows?”

Davison quickly learned that he was, indeed, sounding like an old-fashioned dinosaur and quit Twitter in the aftermath of his comments. Before signing off, Davison attempted to clarify his remarks: “For the record I didn’t say I had doubts about Jodie. I said ‘she’s a terrific actress and will do a wonderful job and we need to open it up’.

“I also urged uncertain fans to be supportive about change. It was a caveat about role models in an otherwise positive answer.” Then he Tweeted: “All this toxicity about a sci-fi show has been sobering, so I’m calling it a day. @PeterDavison5 used to be fun. Now it’s not. Must Dash. xx”