Pomp and Dandyism Abound at the 8th Annual Chap Olympiad 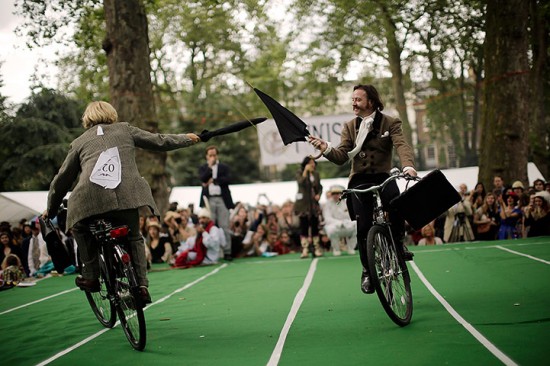 It’s only a matter of weeks until the 2012 Summer Olympics are underway. Last weekend, London hosted a different sort of Olympiad; namely, the 8th Annual Chap Olympiad. Athletes participated in events such as “Gentleman’s Club Golf” and “The Umbrella Joust.” Please note that the rest of this report should be read in the voice of Robert Morley.

The opening of the Chap Olympiad was marked by the ceremonial lighting of the Olympic Pipe, as per tradition. Then, the first event, the pipeathalon, commenced. Over the course of the afternoon, many tweed-wearing, mustache-sporting athletes took part in a variety of events including the “Cucumber Sandwich Discus,” in which individuals must compete for distance as they hurl a cucumber sandwich and a side of potato crisps on a china plate, “Shouting at Foreigners” in which chaps must give a caddish foreigner what’s what, and the above pictured “Umbrella Joust,” in which athletes charge one another on bicycles with umbrella lances and briefcase shields. The annual Olympiad is sponsored and organized by Chap Magazine, a publication for the advancement of the philosophy of “dandyism.” After all was said and done, many chaps and chapettes were honored with the prestigious Golden Cravat. It was, indeed, a lively and entertaining occasion for all those involved.

(via The Chap Magazine, Title image by Matthew Lloyd/Getty Images)

relevant to your posh interests