Superhero comics have a notorious reputation for being unfriendly towards women and girls. If you look through the histories of Marvel and DC Comics, it’s not hard to see why; many superheroines over the years have been objectified and oppressed in a variety of ways (how weird is it that Gail Simone’s now-infamous “women in refrigerators” list was named after something that literally happened in a Green Lantern book?). But look outside the bounds of mainstream cape comics, and you’ll find a … well, legion of female superheroes whose incredible powers are second only to their incredible empowerment. Here are seven of my favorites.

Way back in the Golden Age of comics, things were already shaping up to be a boys’ club, what with your Supermen and Batmen and Captain Marvels ruling the roost. Enter Sheena, who overcomes admittedly problematic Tarzan-adjacent origins with two simple facts: she was the first female character to star in her own self-titled comic book (in 1937—four years before Wonder Woman’s first comic appearance), and she can talk to any wild animal in the jungle. Having grown up as a little girl obsessed with tigers, that is so radical. Sheena went on to inspire dozens of generic “jungle girl” characters, making her something of a mother figure in comic books…a vicious, ruthless mother figure.

Speaking of problematic faves, Empowered is the complete package. She’s a bondage-pinup parody given life, a superhero whose adventures inevitably turn softcore within three pages. Creator Adam Warren isn’t without his critics (Empowered has some rather eyebrow-raising racial humor in particular), but his characterization of Empowered—who loses her powers when her super-suit is shredded, the fragility of which is based on her self-esteem—is impeccable. Any girl who has ever had doubts about her worth or ability to keep going will find something to love here.

And while we’re talking about on-the-nose metaphors, meet Chanda, an unassuming Indian housewife who has been chosen by the goddess Kali to mete out punishment to all those who would harm women. Chanda takes revenge on her husband after finding out he’s been killing their children, and her subsequent adventures take on a distinctly Thor-by-way-of-Punisher feel. Chanda must act as a vessel for Kali’s vengeance as Shakti, saving women from sinister men everywhere, while also maintaining her own mortal life as a social worker. Although Raj Comics is a leading distributor in India, it’s less well known in the U.S., which is why it merits inclusion on this list — unfortunately, Shakti’s stories can also be difficult for American readers to get their hands on. 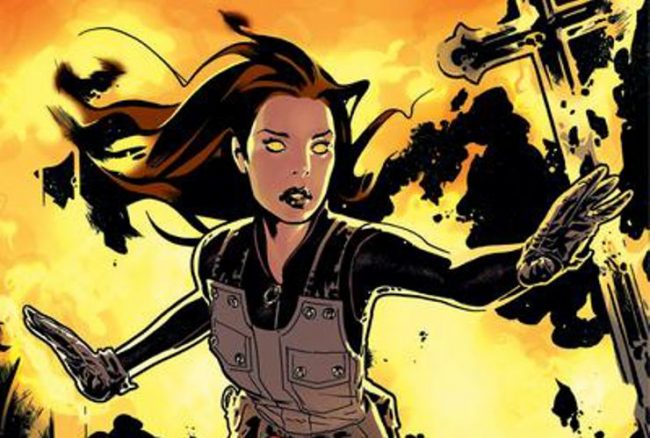 If you thought Shakti sounded volatile, take a gander at Liz Sherman, the fire-flinging fury of the Bureau for Paranormal Research and Defense (BPRD) in Mike Mignola’s Hellboy comics. Liz has had a tough life—accidentally setting fire to your entire block and killing your family will do bad things to an 11-year-old-brain—but as the Hellboy saga progresses, Liz grows into her power and travels the long road to self-acceptance. If you need an army of frog people and homunculi roasted, you know who to call.

Listen, it’s not that I’m obsessed with lesbian superheroes, I just think they’re extra special awesome forever. Cobweb is a delightful pastiche of erotica tropes wrapped up in a sheer negligee and sent out into the world to crack some skulls; along with her lover/sidekick Clarice, Cobweb inserts herself into a host of sticky situations without regard for historical accuracy or continuity. Created by Alan Moore and Melinda Gebbie, Cobweb is ten ounces of sexy in a one-ounce glass, providing some much-needed overt queerness to the independent cape-and-cowl genre.

RELATED: 10 Major Differences Between The Walking Dead Comics and the Show

I hope nobody gets whiplash from this tonal shift, because Bandette (created by Colleen Coover and Paul Tobin) is probably the most family-friendly character on this list. A puckish rogue of the most delightful sort, this young French lass splits her time between aiding the police and making fools of them as she robs from the rich, gives to the poor, gets in acrobatic fights, flirts with flustered boys, and occasionally relaxes in her luxurious(ly felonious) hideout. #Goals, to be honest.

Created by Sophie Campbell, Shadoweyes is one-of-a-kind, even if we start looking at mainstream heroines again. Born into a grim and unforgiving future, Scout discovers she can turn into a blue-and-black creature with super strength and endurance. Calling herself Shadoweyes, Scout doesn’t just have to deal with villains wielding crossbows; she has to confront real issues facing her poor, nonwhite community. As young women everywhere fight to find their purpose and voice in a seemingly ever-more-hostile world, Shadoweyes speaks to our struggles in a fantastical but resonant way—and that’s what the best superhero comics are all about.

Sam Riedel is a freelance writer and editor living in Massachusetts. A former editor at The Mary Sue, her work has also appeared on Vice, The Establishment, and McSweeney’s Internet Tendency, among others. Sam subsists on a balanced diet of estrogen, Pokémon, and comic books. Prolonged contact may cause irritation. Follow her on Twitter @SamusMcQueen.
Want more stories like this? Become a subscriber and support the site!