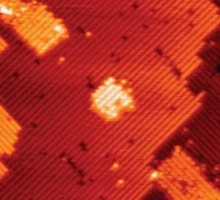 No, that’s not an Intel trade name: A team of researchers from the University of New South Wales and the University of Wisconsin-Madison managed to build a transistor using just seven atoms, according to the AFP.

Created by using a scanning tunnelling microscope to manipulate silicon and phosphorus atoms, their transistor comes in at roughly one-sixth the size of current commercially-used transistors.

The scientists behind the transistor sound an optimistic note in a university press release:

“We are testing the limits of how small an electronic device can be,” Professor Simmons says. “Australia’s first computer was commissioned in 1949. It took up an entire room and you could hold its components in your hands. Today you can carry a computer around in your hand and many of its components are more than 1000 times smaller than the width of a human hair.

“Now we have just demonstrated the world’s first electronic device in silicon systematically created on the scale of individual atoms. This is highly significant not just for computer buffs but for all Australians. For 50 years, this process of miniaturization has been fundamental in driving productivity growth across the global economy. We have shown that this process can continue.”

Don’t throw out your laptop just yet: They caution the AFP that commercial applications for the transistor are at least five months away.