6 More Features We Want to See in Pokemon GO 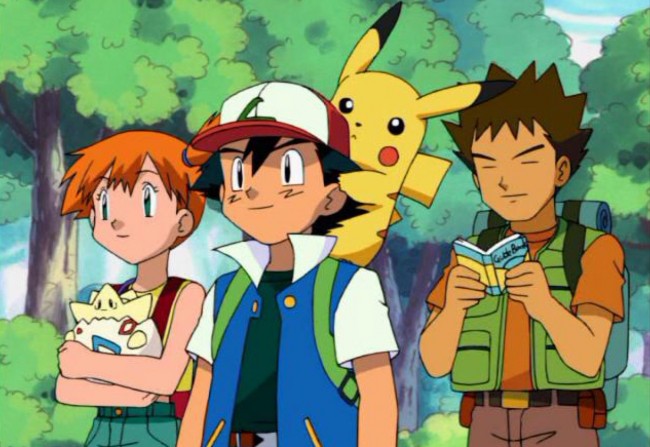 Pokémon was my first fandom.

Sure, I had other stories and franchises I was really into before that (Power Rangers, Animorphs, Tamora Pierce novels), but Pokémon was the first time that liking something fictional also meant being part of a community. The Internet was growing fast and my friends and I took advantage of it, joining group message boards, drawing fanart, even making our own Team Rocket and Brock fan sites.

I made new friends through Pokémon, learned about (and started writing) fanfiction because of Pokémon. It became my gateway into anime and JRPGs, two mediums that would shape the next…well, all of my life. It’s not an exaggeration to say I wouldn’t be the geeky writer I am today if I hadn’t turned on Kids’ WB and watched a boy ride a flaming horse to victory.

Totally worth the third-degree burns.

I hung on to the endless franchise for a lot longer than most of my friends, but eventually I drifted away from it too, picking up the occasional game or skimming anime summaries to see what scrapes my beloved Team Rocket had gotten into recently, but otherwise moving on. Honestly, when Pokémon GO came out, I wasn’t all that hyped for it. I downloaded it out of curiosity, just to see how the gameplay worked.

Then a Squirtle popped up in the room with me, and suddenly I was 11 years old again, and the world was exciting and awesome and I was totally gonna catch ’em all and give them dorky nicknames while I did it.

I got sucked in. I spent most of my trip to Chicago catching endless Drowzees Pokémon with my friends and busting out “fun facts” from the original games or TV series that my brain had squirreled away and were suddenly, somehow relevant again. We stumbled across hidden art and history we’d have never known was there, tapping a PokéStop in an empty lot only to discover it was the site of the Saint Valentine’s Day Massacre.

I’ve started going outside more—even jogging, something it turns out I’ll actually do when it’s getting me from one PokéStop to another faster! The most standard errands are fun now; the most routine travel full of possible Stops to see and Gyms to defend and monsters to add to my pocket.

Pokémon is kinda changing my life again, it seems.

Where Do We GO From Here?

But for all that preamble, this article isn’t really about me: It’s about how so many people have embraced Pokémon GO and gained something positive from it, not just for themselves but for others. Animal shelters are attracting dog walkers.  A children’s hospital is using it to help kids with physical therapy, stress, or just plain boredom. Charity Miles has encouraged players to download their app and earn money for the charity of their choice, and local organizations are starting to put together Pokémon–themed 5k and 10k marathons. To say nothing of all the social events, from pub crawls to city-wide competitions, or the local businesses using the game to draw in customers.

Granted, people being people, it’s not all solar beams and rainbows. The game’s PokéStop system has been intrusive for some private and public residences, players have been literally lured by muggers, and there’ve been sporadic stories of inattentive walkers, careless drivers, and dudes who think playing the same game as you makes street harassment okay (hint: it doesn’t). We need to be courteous, careful, and deal with these problems when they arise, for sure.

Still, an awful lot of the stories surrounding Pokémon GO are positive ones, and as rough (to say the least) as this year has been, the game has been a welcome escape and a way to make life just a little bit sunnier for ourselves and others.

But as creative and clever as players and organizations can be, they’ll always be limited by the gameplay itself. That’s why I’d like to see Niantic take a page out of their players’ handbooks and work to make the Pokémon World wider, more inclusive, and with more community-building opportunities than ever.

Widening The Road to Viridian City

Based on some of the new features in the works, like trading and PVP battles, I suspect Niantic is already heading this direction, but a social feature that lets players mark each other as “friends” would be a good first step to adding more in-game interaction. I wouldn’t want it to be as open as, say, Twitter, since I’m not interested in getting cursed at every time I take a gym (for the glory of Team Valor!), but a request-and-approve Friend system could open up a lot of possibilities, particularly when it comes to making the game more inclusive.

I’m nowhere near the first person to mention this, but Pokémon GO’s focus on wandering around outside means that anyone with limited mobility (whether due to a disability, injury, illness, or heck, a tight budget and limited data plan) has a tough or even impossible time playing the game. Add to this its lack of a voice control option, and the game proves to be largely inaccessible to a lot of people who’d love to join in.

Voice activation should be a fairly straightforward fix, but mobility is a little trickier since the whole point of Pokémon GO is get people outside and moving. A solution to the mobility issue would, I think, need to find a way to incorporate new players without turning GO into every other handheld Pokémon game. I’d love to hear other people’s ideas on this, but personally, I’d be interested in seeing Niantic introduce a remote “buddy system” playing style similar to what BYU students are doing for kids in hospitals, but with more control for the remote gamer.

For example, say a friend of mine breaks their leg. We’re Friends on Pokémon GO, so I contact their account and “invite them on an adventure,” attaching their character, Pokémon, and items to my GPS. Then I go out for a walk and they can follow along on their own device, catching Pokémon, hitting Stops, teaming up for gym battles, and logging those sweet egg-hatching kilometers.

Buddy systems could be beneficial for patients in hospitals, your cool grandma who walks with both a cane and some serious Squirtle Squad swagger, or even something minor like your friend lives across the country and you want to take over a gym together (for the glory of Team Valor!). One of you would still be required to actually go to the gym, which would preserve the game’s central premise while still offering more inclusive gameplay options for others.

Living in a Pokémon World

Niantic has already announced plans for paid “sponsored locations,” which are great since they’ll help feed the developers so they can keep adding cool new features for the rest of us. But I’d also like to see them expand their Pokémon locations and accounts to public organizations and non-profits as well, giving them a chance to be a more active part of the game.

Imagine if hospitals or animal shelters could become Pokémon Centers. They could work as healing stations, distribute items and medals to patients and volunteers, or even set up events where people work together to find rare Pokémon (I expect them to be full of Chanseys, of course). It could encourage volunteer work and make hospitals a lot more welcoming to patients, especially kids.

Or what if local police stations could sign up to have their own “Officer Jenny” accounts? They could give out rewards to players who “thwart Team Rocket” through community service (like cleaning up graffiti or litter). They could organize events or even just toss out little safety tips and notices to users connected to their account, helping to build positive human connections with residents.

Schools could become Pokémon Daycares where kids could “check in” and earn CP or XP throughout the day without disrupting class, or teachers could organize after-school events using their own Daycare accounts. Local public groups and non-profits could have message boards with service requests that get sent out to users who sign up for notices. Or Niantic could incorporate competitions from the later games, like Pokémon Contests and Musicals, giving people more reasons and different ways to get together. There are so many possibilities here, and I’d love to see them explored.

Now, don’t get me wrong—I know there are potential pitfalls to all of these ideas, and that (people being people) there’d be precautions we’d have to take or snags we’d hit along the way. But given how many benefits have already come out of the game, I think it’s worth trying to tap into that and see what else we can do with it.

Pokémon GO is about going out into the world, so it stands to reason it should also have features that help build stronger connections among the people within that world. And, sure. Maybe we shouldn’t need the promise of XP or Pokéballs to volunteer at an animal shelter or clean up the local park. But if it helps people overcome their reluctance or anxiety or just plain laziness, and it makes others’ lives better in the process, than I’d say that’s a game well worth playing.

How about all of you? Got any good Pokémon GO stories to share or thoughts on how the game could improve (beyond stable servers and a better PokéRadar, I mean)? Brainstorm away in the comments!