The 501st Legion Is Crowdfunding Imperial Code Cylinder USB Drives, Someone Crowdfund a Rebel Base! 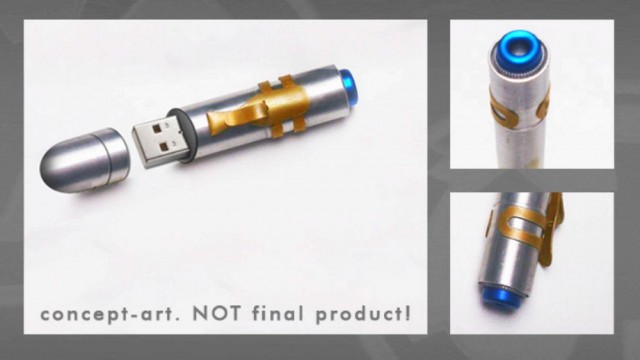 When someone tried to fund a Death Star on Kickstarter we may have had some unkind words about it, but this Indiegogo campaign to fund Imperial Code Cylinder USB drives? This we kind of love– Unless it’s the first step in a plan by the 501st Legion to build a Death Star and rule the galaxy.

If you’re not familiar with the 501st Legion, they’re the world’s largest Star Wars cosplay club in the world. If you see a bunch of Stormtroopers at Comic-Con, that’s probably the 501st. One thing you’ll notice about the 501st is that their costumes tend to be pretty impressive. It’s the attention to detail that led 501st member Andreas Laube to try to make Imperial Code Cylinder USB drives a reality.

When putting together an Imperial Officer costume, Laube focused on the Imperial Code Cylinders seen in the original trilogy. In the films they were used to transport Imperial codes — hence the name — and when Laube got the dimensions, he thought they were the perfect size for a USB drive.

The original cylinders were made from World War II radiation dosimeters, which as one might expect are hard to come by these days. If you have to build a replica of something, you may as well also make that thing a USB drive, because really — why wouldn’t you?

Laube is seeking 10,000€ for the campaign, and although Indiegogo gives fundraisers the option of taking partial funding, Laube is going all or nothing. With 21 days left, the campaign currently stands at 2,891€ so it seems well on its way.

As rewards you get — you guessed it — Imperial Code Cylinder USB drives. The first level where you actually get a drive is the 27€ (or about $36.00) level, but for 5€ or about $6.50 you can help the cause and get a nice looking blueprint of the cylinder. Obviously, more money means more cylinders. There was even a reward of four USB drives plus an original World War II radiation dosimeter, but it was limited to two, and they’ve both been claimed.

Whether you’re putting together an incredibly authentic Imperial Officer costume, or just want a particularly geeky USB drive, kicking in to this campaign seems like a great way to achieve that goal.