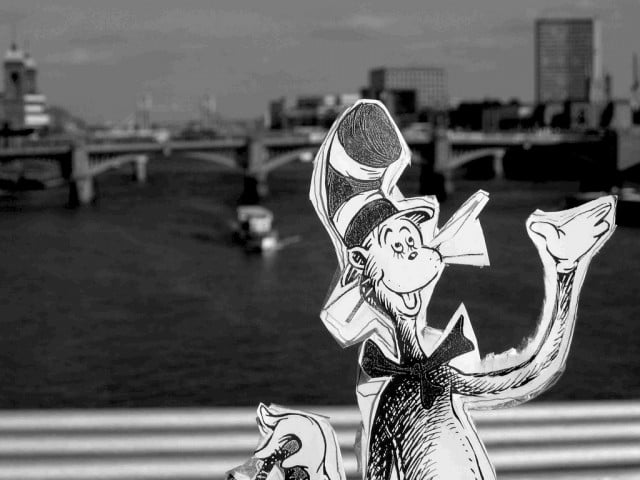 Generally the less I have to think about 50 Shades of Grey, the better. I say generally, though, because occasionally this truly terrible phenomenon can give way to some surprisingly enjoyable parodies. Such is the case with a certain ExplainlikeIAmA thread on Reddit in which user Traceofbass lays out the plot of 50 Shades in the style of Dr. Seuss. Prepare to have your childhood ruined. Or enhanced, if you’re into that sort of thing, I guess.

Here there are spoilers,
Of a lewd little tail,
About a man named Christian,
His last name not Bale.
Oh the places you’ll go!
Under whipdoozles and chainflams,
Into crosswhizzles and jimjams!
Into bondage and bruising,
And handcuffs and lugrams!
Miss Steele, you see,
Was a prudish young lass.
Met a man name Grey
Who laid claim to her ass.
She fell in love with him,
And fell in love quick.
Loved him for his nature,
Not his money, or dick.
A playroom he has,
The color of red,
Full of whipsmackers and butt pluggers,
And a lavish nice bed.
The two go on,
Fucking and such,
Until Ana thinks,
It might be too much.
His gifts they are lavish,
And his love it is savage,
But when she asks for a true taste of BDSM,
It’s more than she can manage!
Devastated she flees,
Back to her roommate,
She explains this problem,
With her dear old friend Kate.
The novel ends there,
Their views sitting unequal.
But never you fret.
They’re back in the sequel!

As the official insufferable poetry nerd at Geekosystem, I have to point out that the meter’s a little rough around the edges at some moments — not that Seuss himself was always perfect. But nitpicking aside, anybody that uses words like “whipsmackers,” “crosswhizzles,” and my personal favorite, “butt pluggers,” deserves all the accolades.

There’s a bunch of really satisfying follow-ups and replies on the original thread, so head over there for more.