50 Hours of Footage From Star Wars Series | The Mary Sue 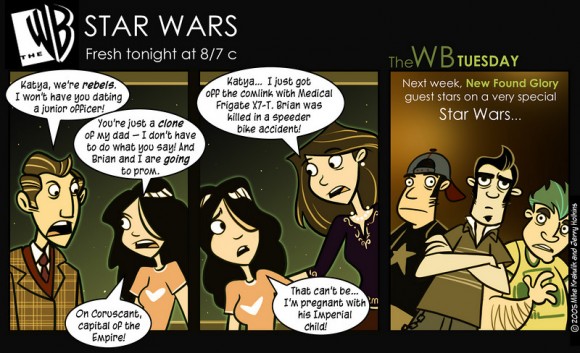 Years ago, there was some discussion by George Lucas that he would be making two new Star Wars series, one of them animated — The Clone Wars, which is a series and a movie — and another live action. Both of them were intended to bridge the story between the two film trilogies, but only the animated series/movie came to pass. Today we found out this wasn’t entirely true: the live-action series — 50 hours of footage — has been shot and is currently collecting dust on George Lucas’ shelves. Waiting to cost less money to produce.

Lucas is insistent on giving us a live-action series that is visually on par with his films, but as of right now, that just costs too much money. But in a Catch-22, Lucas is planning to “revolutionize” moviemaking techniques that would make producing his series (and others) cheaper.

This isn’t quite as preposterous as it sounds. (Especially considering that we all know how loaded George Lucas is.) To shoot a movie is to shoot one movie for $150 million, or maybe two or three over the course of a few years. A TV show is at least 13 episodes a year. And Lucas wants these 13+ episodes to be of the same filmmaking quality as the Star Wars movies, which is an incredibly tall order and a huuuuuge budget. In an interview with G4TV, he says that he needs to figure out a way to shoot the TV show at 1/10 of what it would currently cost. But don’t worry — he’s George Freaking Lucas. He’s on it. Here’s the interview, which also covers the upcoming 3D release of the Star Wars saga: