5 Ways Animorphs Shaped Who I Am, Even If I Should Never Have Been Allowed to Read It 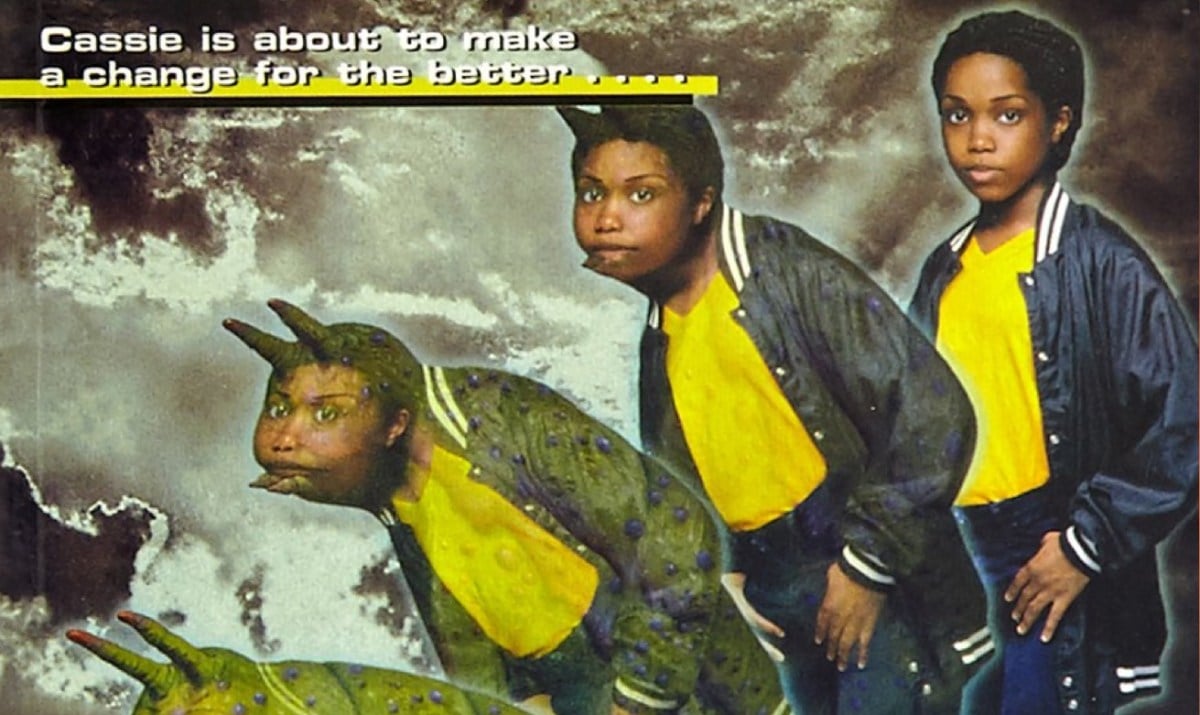 When I was young, I was quite the little reader. I soaked up the Magic Tree House books and every book from the Redwall series I could get my hands on. My library card was well-used.

So, for my 10th birthday, my aunt bought me a book with a cover depicting a teen boy turning into a lizard. It was the first of the Animorphs—a 54-book series (not including companion books) about five teenage humans (and later one teenage alien) who find themselves up against a covert alien invasion with nothing to help them but an acquired power to morph into animals.

It took me nearly 20 more years of my life to realize that no 10-year-old should have ever been exposed to such an intensely violent and generally messed up fiction series.

In that first book, the teens venture into an underground cavern full of screaming humans in cages waiting to get mind-control slugs put in their brains—a scene repeatedly compared to hell. They attempt to fight the alien forces, lose badly, barely make it out alive, and have to deal with the fact that they’re now a single tiny guerrilla force that is the only thing standing between humanity and total, absolute slavery. Also, one of them gets trapped in the body of a bird forever.

In subsequent books, they have to deal with such things as being eaten by a bird while in spider form and morphing back into a human in order to avoid a horrific death, bursting out of that bird’s body while screaming, convincing a pacifist android with perfect memory to brutally slaughter an entire battalion of aliens who had been enslaved against their will, intentionally trapping a rogue Animorph in the body of a rat and dropping him off on an island to die while listening to his psychic screams, tying up their leader so that the brain slug that managed to enter his head can slowly starve to death while the kid mentally witnesses it all, and generally being maimed, disemboweled, having limbs cut off, and one time while in the form of a starfish, being cut in half.

If you’re confused about how they survived, it’s because morphing back into a human entirely cures any injury, no matter how horrific. It cannot, however, cure psychological scarring.

I don’t know why K.A. Applegate or any of her editors or publishers thought this was an okay thing to market to preteens. I guess it didn’t have any sex or swears in it, so that must make it a PG affair. I honestly wonder now if these books had something to do with some of the disturbingly violent fantasies I had in my teen years during the worst of my depression—but that’s not what this article is about.

These are just some of the ways in which I believe Animorphs shaped me into the person I am today:

1. Teaching Me Important Lessons About the Human Mind

There is a good chance that I would have become a psychology nerd with or without Animorphs, seeing as I am, myself, mentally ill. However, Applegate did a fantastic job demonstrating the devastating effects of war on mental health. By the final installments of the series, it was clear that the teen heroes all suffered from horrific PTSD, and that the war had taken all their good qualities and twisted them into something monstrous.

Throughout the books, the kids have nightmares and flashbacks, their grades suffer, they become depressed and anxious, they can’t relate to other teens, and some of them experience emotional numbness and avoidance issues. All of these are symptoms of PTSD.

Knowing what I now know about the brain, I can see that Applegate created an accurate and nuanced picture of this mental illness by demonstrating multiple first-person accounts of its effects on different types of people. One character, Rachel, coped by leaning into the killing aspect of being an Animorph and, over time, became vicious and downright scary. Another found meaning in war but was ultimately left devastated after it took away the people he loved most, and he left human society altogether.

Because of this, I grew up with an understanding of mental health that I believe many people unfortunately lack. I didn’t have to become a psychologist to understand that intense stress can change a person over time or to what extent killing and/or witnessing violence can cause profound psychological problems.

2. Priming Me to Accept and Expect Diversity

On a slightly less brutally serious note, Animorphs has a fairly diverse cast. For the ’90s, it was easily one of the most diverse fiction series available. The group includes a Jewish boy (Jake), a Jewish girl (Rachel), a black girl (Cassie), and a Latino guy (Marco). The Latino teen lives in or near poverty because his dad is depressed, and the one non-Jewish white guy (Tobias) is an orphan who spent his childhood bouncing from home to home and getting bullied at school.

Jake and Cassie also share a mutual attraction, though they decide to delay any romantic relationship until after the war. They eventually kiss, which was meant to be an homage to the first interracial kiss on TV between Captain Kirk and Lieutenant Uhura.

Cassie also has a rare natural talent for morphing and basically performs a miracle by somehow coaxing Marco through a morph when he gets stuck halfway between flea and human after his two-hour morph time limit runs out. Many times throughout the series, this and other skills allow Cassie to be the key to victory or foil a bad guy’s plans. She is arguably the most important Animorph.

The books weren’t perfect in terms of diversity and sensitivity to the issues of marginalized populations, but they did a lot better job than a lot of the explicitly adult content out there at the time. It may have contributed to later pondering about where all the people of color were on Friends.

3. Helping Me Understand That There Is More to People Than Meets the Eye

There are many themes explored in the total 64 books of the franchise, and as the series went on, they became more nuanced. Looking back, I’m impressed by the revelation that the “good” aliens of the series—the Andalites, who invented the morphing technology—had actually planned to (spoiler alert) wipe out the human species in order to prevent the “bad” aliens (Yeerks) from enslaving billions of creatures with the ability to hold guns.

On the flip side, many of the fully enslaved alien races that the Animorphs do battle with turn out to be either entirely peaceful in their free state, or at least trying their best. The Yeerks themselves are extremely limited physically, unless they’re in a brain controlling someone else’s body, but there are some Yeerks who believe that it would be better to live out your life in a mud puddle than steal someone’s bodily autonomy.

One of the most deadly alien races the Animorphs face turns out to be a bunch of cloned children who think they’re playing a game.

That is some serious moral mind-bending for preteens.

4. Turning Me Into an Anti-Imperialist

Among all the themes of the series, the most prominent is probably “war is hell.” Aside from being constantly maimed and nearly killed, the war forces every one of the heroes to compromise their morals and do ethically questionable things, often beyond just killing. They spend most of the series longing for the day when the Andalites come to save them, only to find that their saviors’ plan is to destroy the Earth. The end of the series was deliberately made to be unsatisfying for a more realistic depiction of war.

“We were writing the end of a war, and we really did not want a Star Wars/Star Trek trumpet fanfare, medals-all-around kind of thing,” said Applegate in an anniversary interview. “That felt false. Wars don’t end with a party. Some people who survive war go on with their lives, some come away stronger, some are shattered, but all are changed. We didn’t want to lie to kids about that.”

I came away from Animorphs with the impression that war is not glorious. It’s terrible. I never got into the classic war movies and couldn’t understand why people treated war as something to be proud of. Today, I am not exactly a pacifist. I support fighting back when you have to, but I also understand that when a large, overpowered military force claims to have good intentions and knows what’s best, it’s usually (or always) not true.

The Yeerks spread and conquered because they thought it was best for them and even convinced themselves it was better for “lesser” species who weren’t as advanced as they were. Sound familiar?

I probably would have become a feminist without Animorphs, but as a kid, I loved Rachel as a character. I loved the fact that a woman was explicitly the toughest and most willing fighter, usually a trait reserved for men and boys. Even rarer was her gradual transformation into someone who so enjoyed war that she didn’t think she could function without it. As flawed as she was, I appreciated the flipping of gender expectations, as brutal and messed up as the transition was.

More than that, Applegate frequently set up moments for sexism to be whacked down throughout the series. A suggestion by Marco that girls don’t like bugs and snakes prompts Cassie to toss a garter snake his way, which freaks him out, but in general, the female characters are treated the same regardless of gender. They all have strengths, and they all have flaws.

Animorphs was far from a perfect series. Another person might have read it and concluded not that war makes you ruthless and that’s bad, but that ruthless people win wars and that’s good. But two things remain true: 1) I think I turned out pretty good, and 2) I should not have been allowed to read these books before age 21. Seriously, what does it do to a person to read the word “disembowel” that many times before age 13? Parents, please read what your kids are reading, and don’t let them read Animorphs.

Lindsey Weedston is a Seattle-based nerd, a politics nerd, a psychology nerd, and a video game nerd. When she’s not nerding it up, she’s probably asleep. She also blogs about feminism and social justice over at Not Sorry Feminism and is sometimes on Twitter. You can find more of her rants on Vocally.