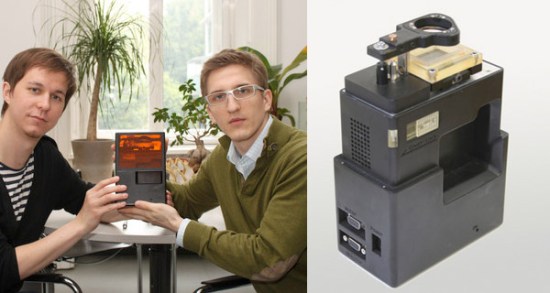 We like 3D printers here at Geekosystem and we also fancy world records, so it’s no surprise that we enjoy the world’s smallest 3D printer. Created by a team over at Vienna University of Technology, the 3D printer is about the size of a milk carton, weighs about 1.5 kg, and uses a tank of resin for printing. The team claims the printer can be built for a low (relative to 3D printers) cost of $1,700.

The printer beams intense light into a small tub filled with resin, and said light hardens the resin. When one layer is complete, work begins on another layer, which can then be attached to the previous. Impressively, the light can harden a layer of resin that is only one-twentieth of a millimeter thick, meaning the printer can be used to build objects that require extreme precision. Due to the size, the printer can not be used to produce larger items, but can be used to produce smaller, intricate objects, best-suited for personal items. Though the printer currently only prints in resin, the team is working to have it print in other materials, such as ceramics and polymers.