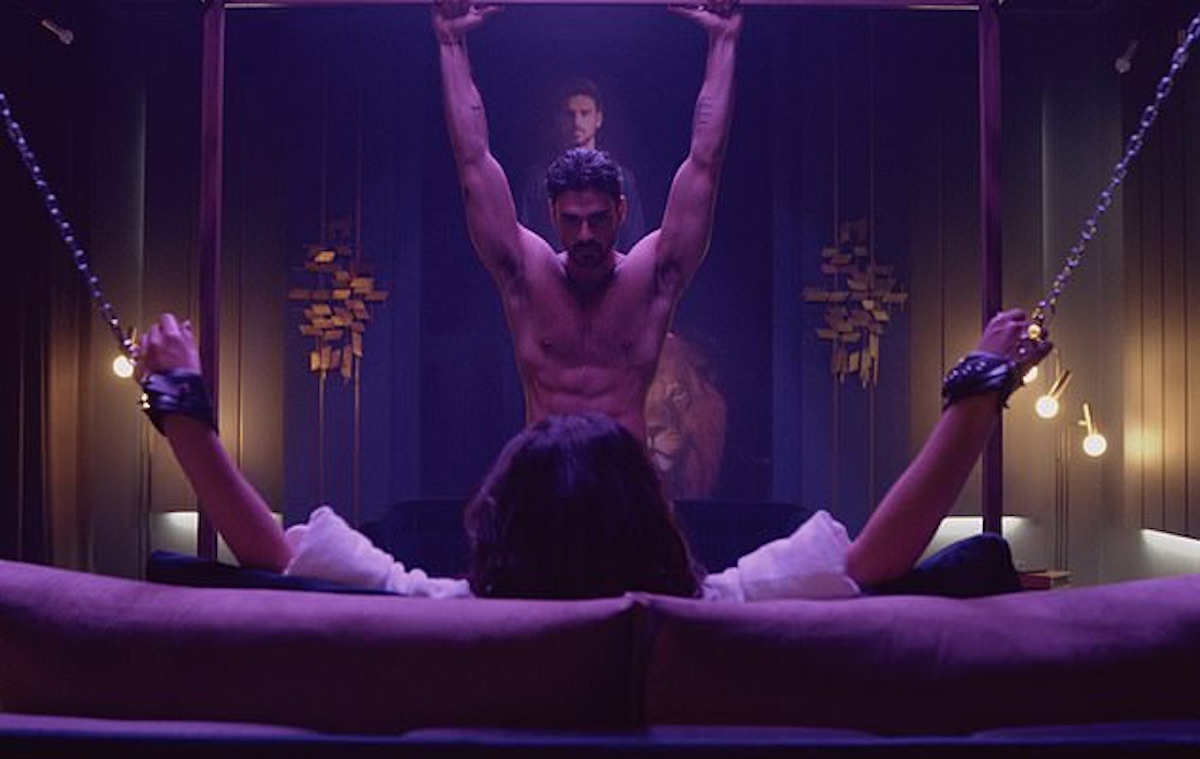 Okay: Spoiler warning for the entire movie, because the twists and the ending all contribute to the general offensiveness of the whole narrative.

Let me explain the plot of 365 Dni to you as best I can. The lead hottie is Massimo, played by Michele Morrone and his abs. He is the son of a Sicilian Mafioso and five years ago he saw a woman on a beach the day his … dad died in a mafia war? Whatever, he sees her now and immediately kidnaps her! Because he fell in love in that brief moment!

Once he has his destined captive/love, Laura (Anna-Maria Sieklucka) in his clutches, he tells her he’s going to hold her captive for 365 days to see if she’ll fall in love with him. He breaks up with her boyfriend on her behalf (after showing her proof the BF was cheating) and keeps her on a luxury boat most of the time. She fights back by … dressing really sexy? And flirting? He gets back at her by … handcuffing her and making her watch while another woman performs oral sex on him??? It’s all fine until she flirts with a guy that gropes her in a club and Massimo murders him, potentially starting a mafia war. Like ya do.

But then! Laura falls in the water off the boat and he saves her! And that changes everything! And they have marathon, incredibly graphic and athletic sex (with lots of choking?!) on the boat. Guess what? They’re in love now and they decide to get married and of course she’s pregnant and of course, the movie ends with Laura apparently being murdered by a rival mob family.

Now, listen, there’s a very good reason this movie is trending right now and that’s because it is, as Decider put it “the closest thing to porn on Netflix.” Many people have compared the film to Fifty Shades of Grey, considering that it’s about a “love story” between a controlling, kinda horrible guy that happens to be really sexy and a woman who ends up feeling happy and “liberated” in a relationship where she is quite literally a prisoner. In fact, per the ever-excitable Daily Mail, fans claim that the movie’s action “made Fifty Shades of Grey look PG.” 365 Dni has a few kinda kinky bits and as a bonus, Michele Morrone is about 1,000 times hotter than Jaime Dornan. (I am a journalist, studying this for scientific reasons).

please kidnap me, save me from the ocean and make me fall in love with u #365days pic.twitter.com/alSgG96xyC

It’s also based on a trilogy of books. As far as I can tell, 365 Dni is not based on fanfic, but it feels pretty typical of fanfic tropes and even romance novel tropes in much of the story. The kidnapping-as-romance trope is almost as popular as “there was only one bed!” in fic. It doesn’t seem to have a happily ever after, but perhaps the fact that there are two more books and a sequel in the works means that Laura isn’t really dead?  (Spoiler: she’s not).

So, what are we to do with this movie and the scores of women (and men!) on Twitter joking about “waiting for Massimo to kidnap me.” 365 Dni is far from an isolated incident, and the fantasy it portrays, of a very hot, very powerful man snatching away a lover, showering them in gifts and awakening untapped sexuality inside them is a tale as old as time. Literally it’s Beauty and the Beast, but the Beast is a hunk who happens to kill people for a living. It’s a fantasy about losing control but also being given a weird kind of freedom to be dirty and sexy and powerfully adored.

That sort of fantasy, the monster whose evil acts allow their lover (usually a woman) to be truly sexual has been around since Dracula, heck, even all the way back to Persephone and Hades. I joked at the top about Stockholm syndrome, but that condition might not even be real, and calling these types of stories “Stockholm syndrome” does reduce women’s desire and sexuality to something beyond their control, which isn’t really what this kind of story is about. The fact that women are attracted to a fantasy where their agency needs to be taken away, and thus they are freed from societal constraints and then allowed to be truly carnal … says a lot more about how society treats sexuality than it does about how we romanticize abuse.

That’s one side of the argument, but of course the other is that this is a rape-y nightmare of a film that truly does romanticize abuse, kidnapping, murder, and controlling behavior. Sure it’s a fantasy and being kidnapped by a male model and forced to live on a luxury yacht is not a problem most women will have to deal with, but the movie is about a power imbalance and a very bad man who no one should find an appealing love interest.

But … people do. And it’s probably because this isn’t a real scenario or set of characters that it’s so compelling. Massimo and his obsession with Laura are no more real than Labyrinth‘s Jareth the Goblin king offering his kingdom to a teenage girl if she’ll just submit. It’s a fantasy about power, sexuality, surrender, and really hot people doing things that would probably be painful and dangerous in real life. (I’m talking about the sex, but this applies to pretty much everything).

People don’t do this in real life … but when men do get controlling and dangerous in reality, does the existence of a movie like this mean some woman will mistakenly think it’s romantic? Does it teach and promote this idea? Or should we give everyone more credit and assume that viewers are able to tell fiction from reality?

It’s hard to be too critical of this movie because I’ve enjoyed some “problematic” fanfic, ships, and romance narratives in my time. We know that this doesn’t translate to real-life behavior or even preferences. But it does feel different seeing it up on screen. For one thing, when you read a fic or novel, you have the benefit of being inside a character’s head, knowing what they are thinking and even the pleasure they derive from something. But in a movie like this, all we see and know is that Laura is kidnapped, manipulated, abused, and ends up sleeping with Chokey McHotBod because he’s … romantic? Kills people? Is it just really really good looking?

Our continued affection and fascination with these types of stories is a complex issue, and dissecting it could take up a whole book of its own and we probably wouldn’t come to a satisfactory conclusion. Yes, this movie’s entire plot is very, very problematic, and it’s a flimsy, bad story that exists as an excuse for steamy sex scenes. But the fact that the movie exists and is a pretty big hit says more about us as a culture than it does about the movie itself.

We can object to and criticize the movie all we want, but we can’t erase it and we have to grapple with the fact that a lot of people like it, and have liked stories like it for way more than 365 days.