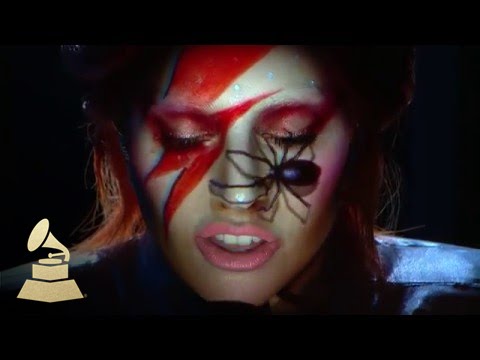 Last night’s Grammy Awards were… well, weird. That is to say: weird in a good and a bad way. Just like every year, the ceremony pretty much lives or dies based on its performances. If we’re judging by last night’s performances–and believe me, we are–then last night’s proceedings were, like I said, weird.

First up: Lady Gaga’s nine-song David Bowie medley. To be completely honest, I kind of liked her performance. I didn’t fall in love with it as many people mentioned they did on Twitter, but I thought it was something that was handled with much care and with the usual panache that befits both Bowie and Gaga. If anyone was going to pull off a tribute to the ★ himself, it was going to be Lady Gaga. A highlight of her performance was the stunning opening, which appeared to utilize the face-tracking visual mask you’ve likely seen come across your Facebook feed at some point.

Included in her performance were “Space Oddity,” “Changes,” “Ziggy Stardust,” “Suffragette City,” “Rebel Rebel,” “Fashion,” “Fame,” “Under Pressure,” with a final wrap-up with the quintessential “Heroes”.

Next: Kendrick Lamar. In what has already been hailed as the most important, most powerful performance of last night’s ceremony, Lamar challenged much of white America to take a look at the messed up racial dynamics at play in the country today. The performance began with him in chains and his band behind bars, and ends on a haunting visual sequence that I find myself still visualizing when I close my eyes. Take note of the shot of the audience during his performance, and all the mystified faces looking up at the stage. The confusion evident in each of their faces is everything.

It’s excruciatingly important to point out that CBS seems to have censored the lyrics in Lamar’s performance of “Alright,” where he says:

And we hate Popo, wanna kill us dead in the street for sure

Lamar performed “Awake,” and “The Blacker the Berry”.

Finally: Adele. The songstress’ performance of “All I Ask” was marred by technical difficulties out of her control. But, like a trooper, she soldiered on through a busted mic and strange mono/stereo shifts. At points, she sounded flat and perhaps out of tune, but really, that’s all on the (likely now unemployed) tech crew who apparently thought it wise to place her microphone on the piano strings. Being unable to hear your own voice while singing definitely puts one hell of a damper on your ability.

Despite the difficulties, Adele did her best and it’s not like this is going to end her career or anything. The world freakin’ loves Adele, tech issues and all.

Last night’s Grammys were really all over the place (for more of the good stuff, you can also check out videos of the Hamilton cast’s performance and acceptance speech. But I guess that’s to be expected when you try to encapsulate the entire music industry in one night. Tell us: did you catch the Grammys last night? What performances really resonated with you?