In a Coordinated Act of Resistance, Theaters Across the Country Are Planning Screenings of 1984

Welcome to the "United State of Cinema." 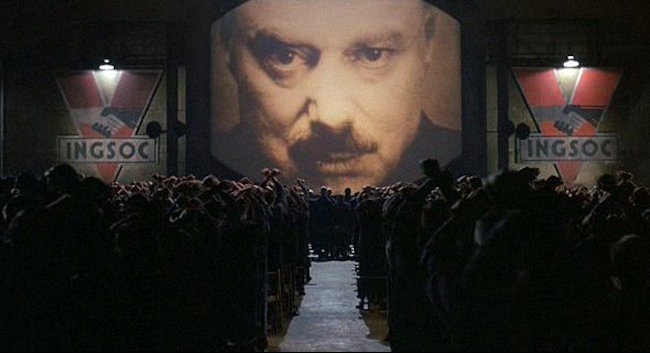 Over the last month (gawd, how has it only been a month?), George Orwell’s 1984 has become all too relevant. The book’s resurgence at the #1 spot on Amazon, along with the play’s move to Broadway, aren’t surprising in the least, given how hard Orwell’s specific brand of dystopia hits at this moment.

Take, just for one of far too many instances, the slogans of the party in power in the novel:

Yikes. In this era of “alternative facts,” this bleak future world feels disturbingly close. But leaning into this terrifying portrayal of a very possible future can serve as a form of protest–one based in resistance through culture, nonetheless.

That’s the idea behind “The United State of Cinema,” a group organizing coordinated screenings of the film adaptation of the novel. On April 4th (the date on which Winston Smith begins his illicit diary in the book), nearly 90 theaters across the country (and one in Canada!) will participate in a “National Event Day” run of the movie.

A statement on the event’s website explains the relevance.

Orwell’s novel begins with the sentence, “It was a bright cold day in April, and the clocks were striking thirteen.” Less than one month into the new presidential administration, theater owners collectively believe the clock is already striking thirteen. Orwell’s portrait of a government that manufactures their own facts, demands total obedience, and demonizes foreign enemies, has never been timelier. The endeavor encourages theaters to take a stand for our most basic values: freedom of speech, respect for our fellow human beings, and the simple truth that there are no such things as ‘alternative facts.’ By doing what they do best – showing a movie – the goal is that cinemas can initiate a much-needed community conversation at a time when the existence of facts, and basic human rights are under attack. Through nationwide participation and strength in numbers, these screenings are intended to galvanize people at the crossroads of cinema and community, and bring us together to foster communication and resistance against current efforts to undermine the most basic tenets of our society.

You can find the locations of all the screenings on that same website, but if there’s not one showing near you, what could be more doubleplusempowering than hosting your own 1984 viewing party on April 4th?

(via The Guardian, image via 20th Century Fox)